As sectarian violence and car bombings continue to flare up across Iraq, new limits on mobility have created roadblocks to the flow of commerce in the country. 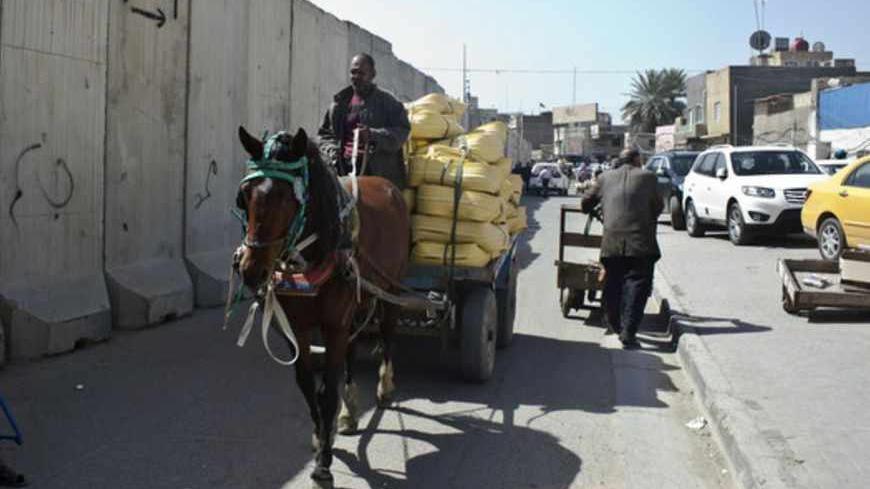 A horse and cart make their way through the Bab al Sharji market, March 13, 2013 in Baghdad, Iraq. - Ali Arkady/Metrography/Getty Images

Concerns about the possibility of Iraq sliding toward the abyss of sectarian war once again have strongly affected commercial activities in Baghdad. Wholesalers in many provinces shifted to the Kurdistan region in northern Iraq, which enjoys security and stability, to obtain goods. Also, real-estate prices in the capital dropped significantly due to a considerable rise in supply.

Traders of food products and construction materials in the predominantly Sunni city of Ramadi, in the west of Iraq, told Al-Monitor that they decided to shift to the wholesale markets in the city of Erbil, the capital of the Iraqi Kurdistan Region, out of fear of going to the Iraqi capital following news that Shiite militias set up checkpoints in the western entrances to Baghdad in search of Sunni men arriving at the capital.

Although the Iraqi security institution denied the news, the transit station for those traveling to Baghdad in Ramadi and Tikrit, in the predominantly Sunni Salahuddin province, has been almost empty in the past few days.

Naim Naji, one of the main suppliers of sugar in the city of Ramadi, said that he made arrangements with dealers in the city of Erbil to provide him with sugar, since he ceased all dealings with traders in the Jameela market in Baghdad's Sadr City, a stronghold of supporters of Shiite cleric Muqtada al-Sadr .

Naji told Al-Monitor, "At present, it is impossible for me to get near Baghdad, specifically near the industrial area in Jameela, since militias are setting up checkpoints and kidnapping Sunnis.”

"I contacted Kurdish dealers in Erbil who will supply me with the amounts of sugar I need," he added.

In the predominantly Shiite city of Kut, southeast of Baghdad, Kazem al-Boukhati, a dealer of car tires, said that he has not visited the tire wholesale markets in the Al-Zuyout area near Rusafa in Baghdad — which has a Shiite majority — for two weeks following the series of bombings that targeted various areas in the capital.

Boukhati told Al-Monitor, "I had to go to Erbil to obtain the goods, which increases transportation expenses." He added, "The distance between Baghdad and Kut is only about 150 kilometers [93 miles], whereas it is more than 400 kilometers [250 miles] between Erbil and Kut."

Near the predominantly Sunni Karkh district of Baghdad, Abdul Wahab al-Bayati, who runs a real-estate company called Mina, told Al-Monitor that the prices of houses have dropped about 10% over the past three months, and continue to decline due to residents’ fears of attacks by Shiite militias. As a result, the number of houses for sale has considerably increased.

Bayati said, "Residents of the Al-Jami’ah, Mansur, Ghazaliya and Al-Khadra neighborhoods in the Karkh district are offering their homes for sale, dramatically increasing supply over demand, which has led to a drop in prices."

In the Aqd al-Nasara Market in central Baghdad, which specializes in the wholesale trade of electrical supplies, Mounir Kamel, owner of Mounir Center for the Trade of Electrical Tools, said,  "Sales and purchasing activities are declining by the day.” He told Al-Monitor that “In our transactions, we depend to a large extent on traders coming from the [other] provinces, and they are currently afraid to come to Baghdad."

Economic expert Bassem Jamil Antoine said, "The political crisis in the country and the recent wave of violence in Baghdad have caused a decline in the sale of houses, cars and goods." He added, "There has been a remarkable commercial recession in recent months.”

Brig. Gen. Saad Maan, spokesman for the Iraqi Interior Ministry, believes that rumors have played a major role in reducing the commercial traffic between Baghdad and the other provinces. Maan told Al-Monitor, “Rumors significantly contributed to painting a blurry image of the real situation in Baghdad among residents of the other provinces, aided by biased media campaigns that aim to create chaos." He added, "Figures in the political and religious institutions also contributed to increasing tension through statements that fuel the security situation."

Maan asserted, "Many reports of violence circulated by biased media, particularly with regard to checkpoints, are untrue." He says, "Journalists have conducted night tours in all the areas in which militias allegedly set up fake checkpoints. However, they did not witness any illegal armed manifestations."

He revealed that a security operation will be soon launched in Baghdad, “the aim of which is to reassure the people of Baghdad." He pledged that "normalcy will return to the Baghdad markets soon."