While the recent car bombings in Iraq are similar to past attacks, they have raised serious questions about the performance of Iraq's security forces and their methods of gathering evidence. 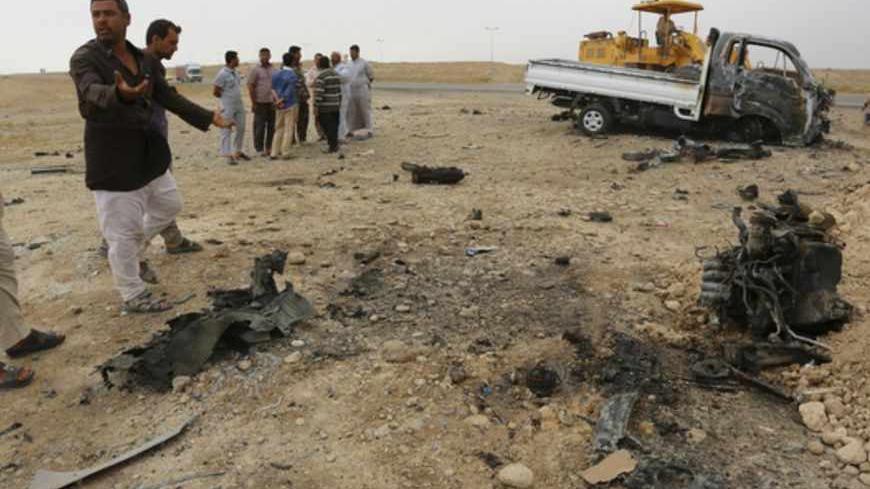 The bombings in Baghdad and Basra on May 20 were no different from their predecessors in terms of the method of execution, the number of victims or the importance of the targets. But they did raise several new questions about the adequacy of crime-scene analysis. Iraqi security sources confirmed that a series of bomb blasts on Wednesday, May 15 claimed 137 lives in the simultaneous detonation of 10 vehicles rigged with explosives in the Baghdad neighborhoods of Al-Jadidah, Al-Muhstal, Al-Zaghraniyyah (south of Baghdad), Al-Kazimiyyah, Al-Husayniyyah (north of Baghdad), Al-Mualif (west of Baghdad) and Sadr City (east of Baghdad).

The targeted neighborhoods are densely populated and majority Shiite, and are not considered particular centers of official governmental institutions. They do, however, constitute attractive targets for those working to stoke sectarian violence in Iraq. The United Nations Assistance Mission for Iraq ranked April as the bloodiest month in Iraq since 2008, stating, "A total of 712 people were killed and another 1,633 were wounded in acts of terrorism and violence."

According to the UN mission, among those killed were 595 civilians and non-military personnel, including 161 police officers. Meanwhile, 1,438 civilians and non-military personnel were wounded as a result of these acts, including 290 police officers. These casualties were in addition to the 290 members of the Iraqi security services who were killed, and the 195 others who were wounded. The mission's statement went on to say that the Iraqi capital of Baghdad endured the brunt of these attacks, as the number of civilian and non-military victims there totaled 697, including 211 individuals killed and another 486 wounded. This area was followed by the provinces of Diyala, Saladin, Kirkuk, Ninevah and Anbar.

The criticism directed at the Iraqi security services' performance dwells on their failure to discover these bombing operations before they were carried out. The dozens of inspection checkpoints set up on the streets and entry points to Iraq's cities failed to prevent large numbers of explosive-rigged vehicles from sneaking in, finding their way to their targets and then carrying out their attacks simultaneously. However, the period following such attacks was also given to scenes of chaos and inefficacy on the part of the security services in restoring order at the bombing site.

One would assume that the Iraqi Interior Ministry's Criminal Evidence Directorate would take charge of the scene upon its arrival, in order to collect evidence pertaining to the vehicles that bore the explosives, the type of explosive devices used, the remains of the suicide bomber, any photographs that have been taken and any other evidence that might prove essential to discovering the identities of those who planned and carried out the attack. However, chaos and frantic activity usually prevail at the scene, and much of the evidence that might limit the scope of these terrorist acts is either ignored, contaminated or destroyed. The activity of the Criminal Evidence Directorate was at its most frenetic on Jan. 26, 2010, when the organization's own headquarters was hit in a major attack that caused the building to completely collapse, killing a group of its senior officers and experts and destroying numerous documents and pieces of evidence.

Sources inside the directorate have confirmed to Al-Monitor that crime scenes are usually subject to changes or otherwise thrown into disarray, whether because of the local population or police officers on the scene being inexperienced in gathering evidence. It has also been discovered that trained forensic-evidence collection teams do not arrive at the scene for a long time, at which point most of the evidence has either disappeared or been contaminated. However, the directorate asserts the opposite, insisting that it is extremely effective in uncovering crimes.

The Interior Ministry's director-general of criminal evidence investigations Brig. Gen. Talib Khalil told the state-owned Iraqi Media Network that his directorate is working to incorporate acoustic fingerprinting as a tool of evidence gathering via a database that will be completed next year. On May 15, 2013 — the very same day in which 10 explosive-rigged vehicles were simultaneously detonated — Khalil spoke about the capabilities of his directorate's testing units with regard to analyzing poisons and organic compounds and determining their sources. He confirmed that individuals in the directorate have both experience and qualifications that demonstrate their utmost ability to perform their duties and conduct chemical and biological tests in order to discern criminal acts, uncover crimes and make deductions regardless of how difficult or complicated the situation, or how professional the perpetrator. He stressed that the directorate is striving to complete projects involving the compilation of databases comprising different types of imprints, similar to the fingerprinting that is conducted on materials found at crime scenes where the prints of both suspects and bystanders are taken, asserting that such imprints constitute incontrovertible evidence that can win convictions.

The tone of the Iraqi Criminal Evidence Investigations director indicated confidence in the capabilities of his unit and its activities to produce evidence against guilty parties — especially in cases involving acts of terrorism. Nevertheless, for its part, the United Nations insists that most trials in Iraq against those accused of terrorism are concluded by extracting coerced confessions.

UN High Commissioner for Human Rights Navi Pillay describes the Iraqi justice system as being "flawed to a very dangerous degree." On April 19, 2013, she stated that "the criminal-justice system in Iraq is still not functioning adequately, with numerous convictions based on confessions obtained under torture and ill-treatment, a weak judiciary and trial proceedings that fall short of international standards."