Palestinian Reconciliation: Why The Delay?

Fatah and Hamas appear to have reached agreement on their outstanding issues but have postponed implementation, to allow current peace efforts with Israel to move forward. 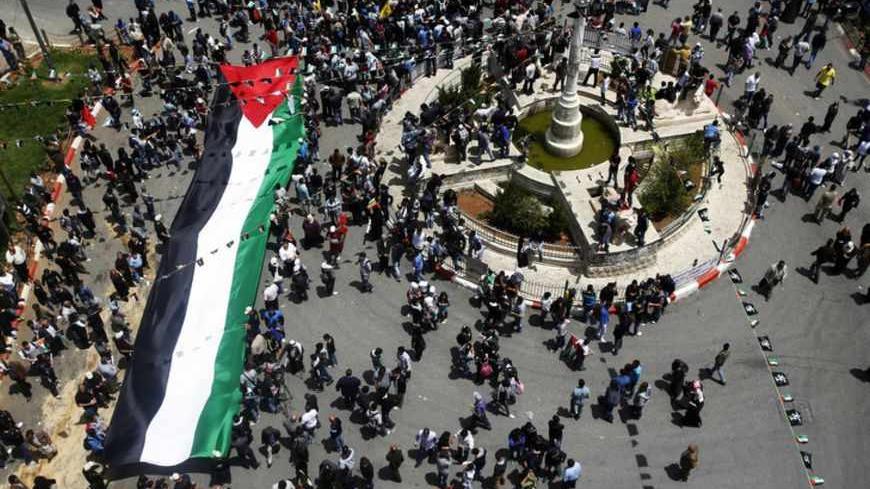 Palestinians carry a giant Palestinian flag during a rally to mark Nakba Day in the West Bank city of Ramallah, May 15, 2013. - REUTERS/Mohamad Torokman

The news out of Cairo regarding Palestinian reconciliation efforts appears to be generally positive. The delegation headed by senior Hamas official Mousa Abu Marzouk and Fatah’s Azzam al-Ahmad met and agreed on a package deal that seems to address all the outstanding issues between the two parties. Statements issued in Cairo and published on the official websites of both groups are identical, which is a good sign. Details of the emerging agreement appear to indicate that the major outstanding tests needed for success have been passed:

While the agreement has been generally well-received by Palestinians, the continued delay in reaching it has elicited criticism from various circles. The Palestinian cartoonist Khalil Abu Arafe summed up indignation over the three-month delay by showing two women discussing the agreement under the Arabic words "Ala mahilh" (taking their time).

The delay is possibly unrelated to the time actually needed to reach consensus on the issues, which have been debated ad nauseam for years. Rather, there is a widespread belief that the Palestinian leadership has given US Secretary of State John Kerry two months to work out details for restarting Palestinian-Israeli negotiations. While the discussions were held in secrecy, some of the information emerging from Ramallah, Tel Aviv and Washington seem to indicate that some pieces of the puzzle are falling into place. Israel appears to be willing to quietly stop settlement activity outside the major West Bank settlement blocks, while the Palestinian leadership has postponed all attempts at becoming a full member of UN agencies, in particular the International Court of Justice.

It is unclear what the true relationship is between Palestinian-Israeli peace talks and reconciliation efforts. For some time, Hamas officials have complained that Israel and Western countries, in particular the United States, have placed a veto of sorts on reconciliation efforts since they have vowed not to engage with Hamas.

Palestinian officials in Ramallah reject such claims, saying that national unity is a private Palestinian affair, and no one has the right to interfere or attempt to delay it. They also note that whatever new government is established, it will be Mahmoud Abbas’ government, even if its members include ministers who belong to the Hamas-affiliated Change and Reform Bloc of the PLC.

Neither Fatah or Hamas believes that if a breakthrough in peace talks were to be reached in the next month, it would produce results that would jeopardize the reconciliation process due to added pressure on keeping Hamas out of any new government. But the question remains unanswered as to why both Palestinian parties have chosen to wait yet another three months to agree on issues that they had previously agreed upon.