By drawing red lines it cannot keep, Israel is harming its credibility and its deterrence capability. 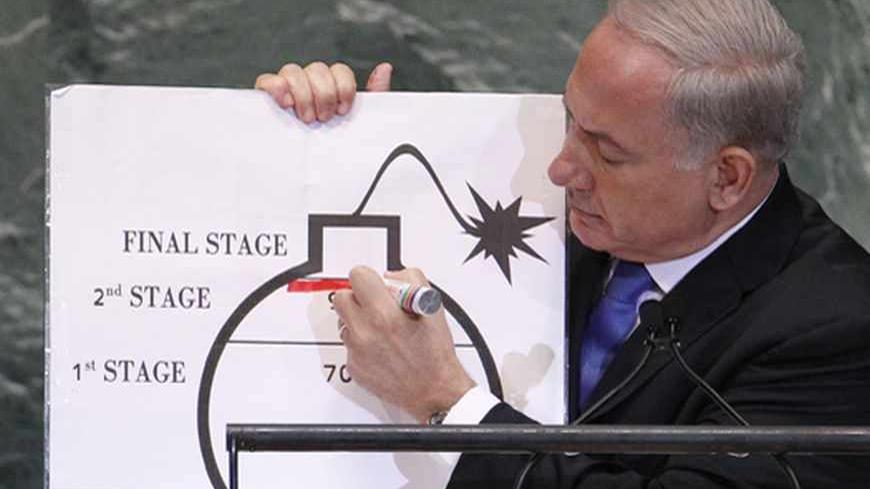 Prime Minister of Israel Benjamin Netanyahu draws a red line on a graphic of a bomb as he addresses the 67th United Nations General Assembly at the UN Headquarters in New York, Sept. 27, 2012. - REUTERS/Lucas Jackson

It’s been quite a few weeks since Israelis woke up to the sound of threats surrounding the Iranian missile program. I mean Prime Minister Benjamin Netanyahu’s threats, obviously. Though the prime minister could once be counted on to drone on constantly about all the risks inherent in a nuclear Iran, especially before elections and during coalition negotiations, he has suddenly gone silent. The “point of no return,” which became an integral part of the Israeli public’s lexicon, has all but vanished. The same is true of the red line that Netanyahu drew on a cartoon caricature of a bomb during his speech before the United Nations on Sept. 27, 2012.

Israeli public opinion has been distracted by a new red line, which has pushed the Iranian threat into a corner. Yes, another threat is grabbing all the headlines, though it would probably be more correct to say that it is making the headlines, while it extracts all those Israeli politicians who used the Iranian nuclear campaign to their advantage from a proverbial dead end.

By now it should be obvious to everyone that Iran has no intention of making a humiliating U-turn. It will not hold back its nuclear development just because Netanyahu drew a red line at the United Nations General Assembly. Instead of enjoying his proven success in winning widespread international opposition to Iran’s development of nuclear weapons, he failed by drawing a clear red line, which would, ostensibly, oblige him to act. During that same speech at the United Nations, Netanyahu declared, “There is only one way to peacefully prevent Iran from getting atomic bombs. That’s by placing a clear red line on Iran’s nuclear weapons program. Red lines don’t lead to war. Red lines prevent war.” But that same red line turned out to be a mistake.

Whenever someone draws a red line, they immediately walk into a trap. Excuse me for saying so, but whenever anyone fails to fulfill their threats, they give the impression that they simply aren’t serious. That red line turned out to be that same kind of mistake, even if Netanyahu’s advisers got a real kick out of his use of visual props at the General Assembly, which, they claim, “won over” the public opinion.

Netanyahu can’t do anything against Iran without first receiving a green light from Washington. As an homage to Netanyahu and his performance at the UN, let’s sketch it all out like a children’s cartoon. US President Barack Obama, played by Tom the Cat, is standing behind Netanyahu, played by Jerry, at the United Nations General Assembly. Tom fills his lungs with air. His cheeks get bigger and bigger, until they fill up the entire room. As soon as Jerry is about to light the fuse on his illustrated bomb, Tom gives a big puff, putting out the flame and blowing all the other participants out of their seats.

Obama’s green light simply refused to go on, despite all the efforts. Netanyahu’s red line, which was so vivid, so bold, so intense and so ominous, has faded into a historical footnote.

And so, ladies and gentlemen, allow me to introduce the new red line marked by Israel’s aerial assault on Damascus, which was also so vivid, so bold, so intense and so ominous. This red line follows the preoccupied Israelis, even more than the latest economic decrees imposed on them by their elected representatives. The name of this new red line is S-300, aka the advanced Russian missile system that Syrian President Bashar al-Assad just received, and which he is bragging about to the entire world.

So much has already been written about the supposed Israeli aerial assault on Damascus a month and a half ago. Its security and diplomatic implications on Assad’s regime have been analyzed in length, even on this site. There are already clear consequences for at least one parameter of the attack: the impact it had on Syrian morale. The color has returned to Assad’s ashen complexion. A bold ruddiness has replaced his wan look (we could use some other cartoon to illustrate this too, but let’s leave that for now). Assad is back to being his old self, ready and willing to threaten Israel in return.

And so, one morning the citizens of Israel, who had long been used to living in the shadow of the Iranian threat, woke up to another threat looming across the border: the “Syrian threat.”

Yedioth Aharonoth daily published a photo of Assad along with a huge headline that took up the entire first page above the fold: “Syria: We Will Respond Immediately if Israel Attacks Again.” In an interview with Hezbollah’s Al-Manar network, the Syrian president (yes, he’s still the Syrian president) declared without the slightest hint of trepidation: “Syria has received the first shipment of Russian anti-aircraft S-300 rockets. All our agreements with Russia will be implemented and parts of them have already been implemented.” His foreign minister had already said that Syria would retaliate immediately if Israel attacked again. In more colloquial terms, Israel gave Assad a chance to say, “Let’s see you now, tough guys!”

So what have we had so far? There was a threat made against Iran that if it doesn’t stop developing its nuclear capabilities, the Air Force will be right over to bomb them. That never happened. If anyone does attack the nuclear reactor of Bushehr from the air, chances are that it will not be the Israeli air force, at least the way things look now.

Will Israel attack Damascus again? Will it really fulfill its threat about its second red line, now that Russia has sent a shipment of missiles to Syria? Is Israel ready to face a counterattack on its cities in response to the destruction of those missiles, which are considered a “game changer”?

And then there is the most important question of all: Is Israel prepared on the international diplomatic front to get into a quarrel with Russian President Vladimir Putin, after he ignored the pleas of Benjamin Netanyahu and Deputy Foreign Minister Zeev Elkin not to supply Syria with missile systems?

With the country’s leaders quick to draw red lines, it would have been well-worth thinking out the consequences of where the threat of an attack might lead Israel. So far, the red line drawn in Syria set off a dazzling red light in Russia, which poses much more of a threat than Netanyahu’s Iranian red line or Assad’s S-300s.

All this leaves just one question. On what sketch will Netanyahu draw a red line during his next speech at the United Nations? I’d recommend something to do with Bugs Bunny.