Is Erdogan Calling for Jihad In Turkey?

Prime Minister Erdogan's May 5 speech, with its religious imagery and outrage about events in Syria, could be seen as a rallying cry for a Turkish religious obligation to fight the regime, writes Pinar Tremblay. 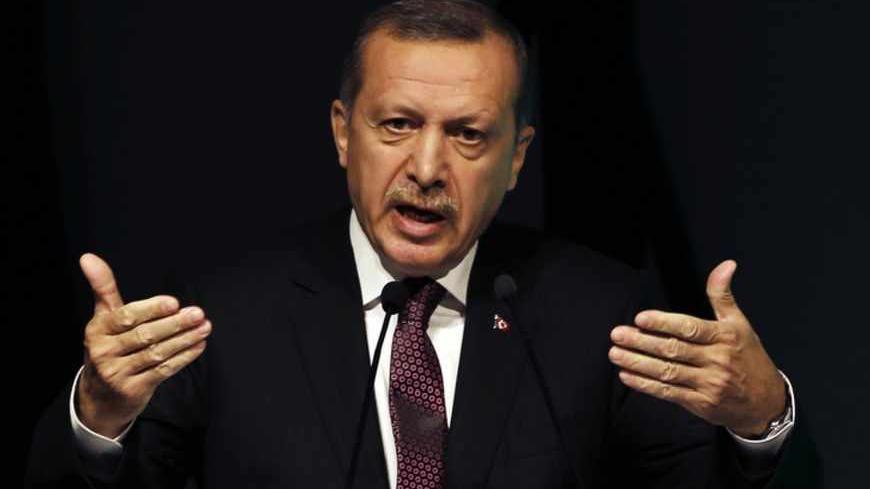 A rather long speech Turkish Prime Minister Recep Tayyip Erdogan gave at his party’s consultation and assessment meeting at Kizilcahamam, Ankara, on May 5, marks a turning point in Turkish foreign policy.

Erdogan spoke about many domestic issues but almost his entire speech was structured upon this moral clarity on what is right for Syria.

Erdogan’s speech first and foremost was designed for his Justice and Development Party (AKP) base, and was written by well-versed Islamists for observant Muslims. This becomes intensely acute because it is heavily imbued with Islamic tones, and asks you not to be anxious, to listen to your conscience, to pray for God’s help, that God’s help is near and that there should be no “doubt” about many of the rather problematic issues of the Syrian civil war.

This is where it gets a bit difficult, because politics is all about doubt. On the other hand, religion provides the comfort of belief and trust. That is only one of the reasons why, when you marinate political rhetoric with religious flavors, it almost always magnifies the effects.

1.  Anger means strength and charisma. Erdogan surely satisfies the Turkish infatuation with charisma. He is frequently angry, extremely passionate. He rarely, if ever, doubts. Hence, there are no gray zones. Being the ultimate alpha male, Erdogan captures all “souls and spirits.” He is the father figure. He is the center character of the fairy tale who is the underdog but never the loser. Other leaders of opposition are never angry enough. In his speech about Syria, Erdogan was beaming with anger when he blasted the CHP’s (main opposition party, the Republican People’s Party) meeting with “butcher Assad.” Yet, it was a year ago when the Turkish plane was shot down by Syria; Erdogan gave a calm, collected speech. It is worth noting that in June 2011, Erdogan had another angry outburst against Syria, this time particularly targeting, Maher al Assad, Bashar’s brother. This speech signaled Turkey will be cutting off official communications with the Syrian regime shortly. This is just one of the signposts that Erdogan’s approach to Syria has evolved over time.

2.  Non-sectarian but morally superior to all. There have been horrible crimes in Syria in the last two plus years of Syrian civil war. Indeed, there have been several horrid crimes against humanity inside Syria — and all over the Middle East on a daily basis — against Muslims by Muslims. But Erdogan’s latest speech focused on the crimes in Baniyas. So far, a reported 70,000 people have been killed in Syria, some by the regime, others by the opposition and some by just simply mobs. Yet, Erdogan has not uttered a word about crimes of the “Free Syrian Army” in public, or the crimes simply due to collapse of central authority. However, the deaths of 100 Sunnis in the Syrian regime's reported "ethic cleansing" of the coastal town of Baniyas have been framed by Turkish media and the AKP as the next turning point. Erdogan did not mention Israel’s recent attack. He did say, “We will not be one of these 'silent evils' when innocent lives are butchered in Baniyas.” It was a sign that Erdogan will observe the memorandum of understanding between Turkey and Israel not to step on each other’s toes in Syria. This piece explicitly refrains from taking sides whether what Israel did is right or not, or whether any country is morally superior. However, it is peculiar that as a leader who has always enjoyed Israel-bashing, Erdogan would let go of such an opportunity.

3.  Is fighting Syria a religious duty?  For most viewers this might not be an obvious conclusion. Scholars studying jihad rarely study the Turkish political spectrum, and those writing about political Islam in Turkish rarely publish in English. Hence, there are major gaps in the literature about the Turkish version of political Islam. Here, please note that not all jihad is militant. Erdogan does not openly advocate militarism. When he referred to “dawa” (the cause) and leader of the "ummah" (people), he openly refers to Prophet Muhammad (May peace be upon him). He told his party members that they not only carry the “responsibility” for Turkish cities, but also named several “Muslim” cities (including Jerusalem or Al-Quds), and asserted that the followers should feel the responsibilities on their shoulders for the well-being of those cities as well. Yet, Erdogan’s last speech is indeed a declaration of jihad (war as religious duty) against the Assad regime. First, Erdogan stated, “Every member of my party should know this and each and every life lost in Syria is our life, is one of our own. If you do not feel that, I will doubt you. AKP members will understand what I mean.” He continued to say that the followers should not care what others say but “the basis of our belief is believers are brothers” (siblings gender neutral in Turkish). This was the crux of his speech on Syria. He explained that there are two options, one is to be deaf and blind to these murders, and the screams of innocent Syrians. The other is to say ‘’enough already." He said that the Turkish nation is not like any other, that “we will not be quiet in the name of balance of power, conjectures or interest — we are not a nation or a state like this.” He then drifted into the crowd-pleasing neo-Ottoman aspirations, particularly those about facing the “honorable” Ottoman sultans in the afterworld. The speech continues with mostly Arabic words to inform believers that Syrian President Bashar al-Assad will surely be punished — hopefully in this world — and that believers who yearn for God’s help will be answered.

4.  Possible policy implications: Many political speeches are given just to solidify public support for leaders. Much of the heated rhetoric is soon forgotten. This piece argues that Erdogan's May 5 speech was a signpost for Turkish foreign policy. It signals that the state will now initiate, encourage and support further ways and means of toppling the Assad regime and its allies, both overtly and covertly. Given the general consensus that sectarianism is on the rise in the region, it will be difficult to keep “neutral” and ambiguously non-sectarian in the Middle East for domestic or foreign audiences.

For many months, the Turkish government has emphasized its non-sectarian approach to the Middle East. Yet, Erdogan’s latest speech does not support this claim. It is either that their declarations are skewed or the meanings of these words they employ differ from the mainstream. The AKP reframing of the Baniyas massacre as a focal point of the Syrian civil war can also be seen as a compensation for the moral difficulties which the alleged Israeli bombings generate for the AKP base.