In Turkey, Blame America for Syria

Since 2003, Turkey has shifted from being vehemently against any US intervention in its backyard to assigning the blame for the Syrian civil war to a lack of US commitment, writes Pinar Tremblay. 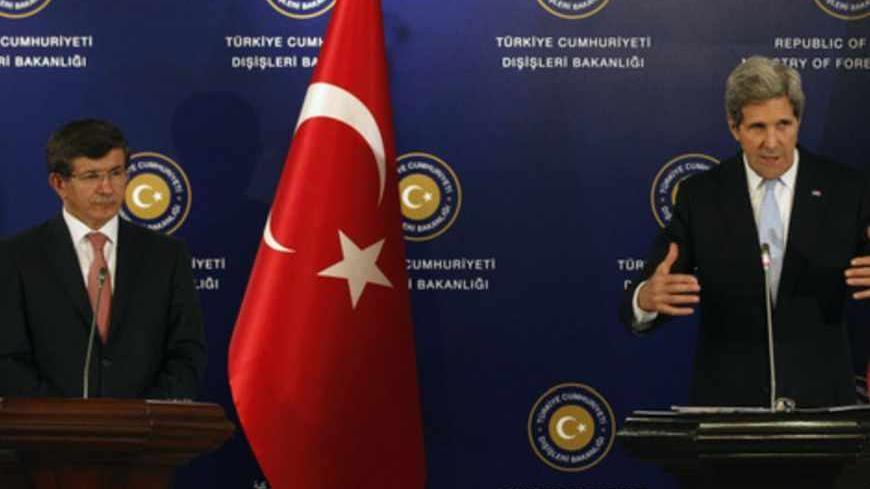 Throughout 2012, it was perplexing to watch many Turkish pundits rooting for a military intervention in Syria, given the 2003 Iraq war.

In early 2003, 71% of Turks thought the US could militarily threaten their country, according to a Pew Research Center survey. The majority of the Turks have been vehemently against the US intervention in Iraq. A decisive parliamentary vote rejected the US proposal to send its army to northern Iraq through Turkey under AKP leadership on March 1, 2003. Foreign Minister Ahmet Davutoglu’s 2001 book, Strategic Depth, argues that if the region is strong, other powers will not intervene and it is best to resolve conflicts through regional means. Therefore, one would predict, the Obama administration’s “leading from behind” policy would please the current Turkish government and public. Do Turks prefer a US and international intervention in Syria? Asli Aydintasbas recently wrote a piece complaining that the US is not yet ready to see the backs of the Assads.

Aydintasbas wrote that the US prefers to prolong the civil war, rather than toppling Bashar al-Assad right away, due to fears of post-Assad jihadist elements taking over. She further tweeted to her friends that she is almost at the point of saying the US refrains from a military intervention because there is no oil in Syria. Aydintasbas is not alone in this rhetoric about the lack of US involvement and interest in the Syrian case. Turkish mainstream media have been increasingly critical of the US for “turning a blind eye to the Syrian civil war.” Based on talks with several Turkish pundits over the last couple of weeks, this piece will try to clarify some facts that are deliberately omitted from these anti-American viewpoints.

1. The US has no magic buttons to press: Contrary to the overwhelming belief that the US is omnipotent in the world, particularly in the Middle East, and is able to switch dictators with liberal democrats as it pleases, the US knows well that it has no such power. True, the US has had its share of foreign interventions, military and clandestine, yet through each of them it has learned a bitter lesson. Also, in many instances when the US sought to intervene, based on humanitarian concerns in the region, it faced backlash. The latest blunder came from Secretary of State John Kerry about Erdogan’s Gaza trip. Many pundits argue this public US disapproval of the trip will generate an “I dare you” moment with the Turks. Unless a graceful excuse is found, public support behind Erdogan’s notorious visit will increase. So, it is fair to say there are no Obama wands that can be waved from Washington to topple Assad short of a military intervention.

2. The US has not reneged. What is shrewdly omitted in the Turkish pundits’ harsh US critique is that no US official promised military intervention in Syria since the start of war in 2011, and the promises that were made have been kept. The US has been consistent in its statements that it would not deploy ground troops. The frenzy in Turkish media has been to expect deeper US involvement after the November 2012 elections. Even though there were no signals from the US for a shift in policy, why was further US-involvement rhetoric kept alive?

3. Unfair criticism to mask others’ failures: All agree that the international community has failed to stop the atrocities of civil war in Syria. However, no credible plan has been brought up to suggest that a foreign military intervention would indeed save more lives than it would risk. This is a difficult statement to understand for many pundits who have never experienced war, particularly a civil war. Have not all initiatives, including Davutoglu’s very own, failed utterly to bring about a regional agreement on the Syrian civil war? Could you name any US president who has gone on a vacation with Bashar and his family? When the current AKP government was lifting visa restrictions and becoming “brothers” through booming trade relations with the cruel Syrian dictatorship of four decades, the US indeed had limited contacts and strict financial sanctions against Syria in place. There are several valid points of criticism against the Obama Administration’s policy specifics. Fred Hof provides a detailed up-to-date version, yet even the harshest critics agree the US should not put ground troops in Syria. Short of that, the US has been engaged in Syria through providing nonlethal aid, vetting and training the opposition. However unpleasant the results are, US actions and rhetoric have been consistent in the case of Syria.

4. Post-Assad transition concerns: It would be foolish of any country to belittle the difficulties that would fall upon the region if Syria drifts into further abyss. Turkish pundits’ newly found hatred toward the Syrian leadership is mind-boggling and to some extent undermines the design of successful, feasible policies. Despite several meetings, there is still no unified opposition against the regime. One cannot help but doubt Turkish intelligence on Syria when Davutoglu is quoted on CNNTurk saying there was no Jabhat al-Nusra in Syria before the civil war. Indeed, the Assad regime’s direct and indirect links with al-Qaeda and other terror networks (particularly to support Iraqi insurgency) has been well-documented for decades.

In a country where there is sometimes a lack of self-criticism in government policies, it is always easier to criticize others, especially the US. As the Syrian civil war becomes prolonged, it is logical to expect more US-bashing for domestic consumption in Turkey. Yet, however disturbing self-assessment might be, Turks need to ask what their plans are for the post-Assad era: Is Turkey ready to wave the bogeyman Bashar goodbye without a legitimate alternative replacement? If the struggle to establish a “secular,” not jihadist government in Syria is a Western ideal, then how does the Turkish planning conceive the next Syrian government? Would that plan bring stability and peace to the bleeding Turkish-Syrian border along with Iran and Iraq — not even considering the other borders?

Although the Turkish government is mute on these questions and the press is extremely emotional on the policy failures in Syria, they must all know that stoking the fires of anti-Americanism will not save any Syrian lives or end the horrid civil war.

Pinar Tremblay is a doctoral candidate in political science at University of California, Los Angeles, and an adjunct faculty member at California State Polytechnic University, Pomona. She has previously been published in the Hurriyet Daily News and Today's Zaman. Follow her on Twitter: @pinartremblay.