Will the Iraqi Cabinet Meet In Kurdistan Region?

Iraqi and Kurdistan Regional Government sources have confirmed that a cabinet meeting will be held in Erbil, reports Ali Abel Sadah. 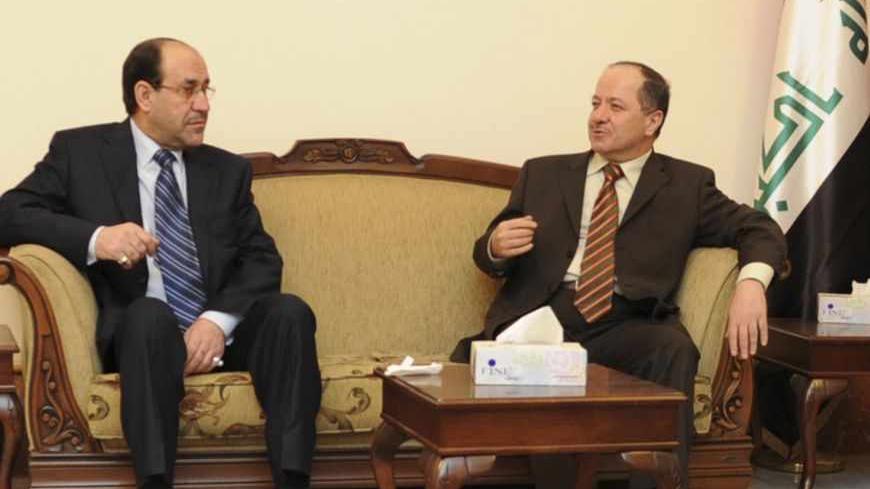 The news on May 2 that the Iraqi cabinet will hold a session in Erbil opens the door to a number of possibilities, including the return of friendliness to the tense relationship between Iraqi Prime Minister Nouri al-Maliki and Massoud Barzani, president of the Kurdistan Regional Government (KRG). Such a meeting also indicates that Baghdad continues to probe the intentions of the Iraqi Kurds, especially given that its request that the cabinet meet in Erbil was vehemently opposed by some Kurdish members of the parliament in Baghdad.

Kurdish Minister of Trade Khairallah Babakir announced the meeting in a press release on May 2, “Prime Minister Nouri al-Maliki agreed on holding a cabinet session in Erbil as part of a series of meetings to be held with Kurdish powers and President of Kurdistan Massoud Barzani to activate the agreement between both parties.”

The government in Baghdad is yet to make an official announcement about the meeting, but Maliki's Islamic Dawa Party has confirmed to Al-Monitor that a session is, indeed, supposed to take place in Erbil. Khaled al-Assadi, a leading member of the party, declared to Al-Monitor, “The aim of holding a cabinet session in Erbil is clear. [It is about] sending a message to everyone that Kurdistan is a part of Iraq and that the cabinet is a federal council for all Iraq.” When asked about the date of the meeting, Assadi responded, “It is not yet set.”

Negotiators from both sides confirmed to Al-Monitor that the latest agreement drafted by Maliki and a high-ranking Kurdish delegation in Baghdad involved cooperation in seven areas: amending the current general budget law; settling the issue of the law on oil and gas and the Tigris and Jazeera Operations Commands; redrawing disputed administrative frontiers; compensating people affected by the chemical attacks on the Kurdish areas under former president Saddam Hussein; and appointing representatives of both parties for cooperation and information exchanges.

The seven items were the fruit of intensive meetings that began as soon as the Kurdish delegation, headed by KRG Prime Minister Nechirvan Barzani, arrived on April 29 at the Baghdad office of Ibrahim al-Jaafari, the head of the National Iraqi Alliance, to which most Shiite parties belong. Afterward, the delegation headed to Maliki's office to discuss points of contention.

In years past at meetings between Erbil and Baghdad, similar memoranda had been agreed upon, often resulting in new crises. Hiwa Osman, former media adviser to the Iraqi president, told Al-Monitor, “The cordial talks between the leaderships of Baghdad and Erbil help to promote a truce amid a tense political environment on multiple levels. Yet, the last agreement will not be fruitful unless accompanied by practical steps that achieve progress and unequivocally settle all disputes.”

Nonetheless, the disputes involving governing mechanisms in Iraq have not been settled because there is no institutional management of the dialogue between the parties, and the ink on their agreements has not been turned into action. At least that is what Osman hinted at when he declared to Al-Monitor, “The agreement between Baghdad and Erbil is crafted by politicians, yet it is more important to assign technical crews for execution.”

In Erbil, concern is rampant about the compromises made by Maliki. Some fear that they are merely a political lifeline for extricating himself from the crisis involving enraged Sunnis demanding his ouster.

A source close to Barzani revealed to Al-Monitor, “Barzani channeled the focus in the latest discussions with Baghdad on the importance of communication between both governments. He believes that the solution to crises is reached through mutual understanding, cooperation and harmony.”

The optimism of Baghdad and Erbil is not enough for moving forward, however, because it cannot resolve the deep-rooted, substantial and intractable problems related to ongoing issues of interests, influence and political intersections. Other political crises have been resolved through talks on agreements and clauses, but execution has been missing, especially when it comes to the distribution of national wealth and settlement of the legal status of Kirkuk in addition to the delineation of provincial borders.

Moayad al-Tayib, spokesperson for the Kurdish MPs in Baghdad, agrees with this view. He told Al-Monitor, “The agreement has not yet been coupled with guarantees. It is all related to goodwill, but if the agreement turns out to be just talk, we will have no choice but to go back to the drawing board.”