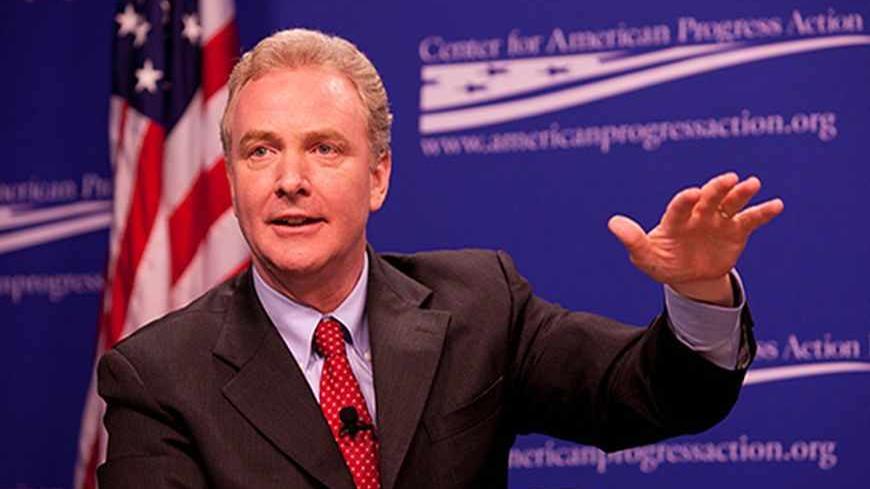 Representative Christopher Van Hollen, ranking Democrat on the House Budget Committee, warned on May 14 of the “unintended consequences” of US military intervention in Syria, including providing arms to rebel forces.

Van Hollen, serving his fifth term representing Maryland’s Eighth District, is among the most influential politicians in Congress. According to Roll Call, Van Hollen “gets near-universal respect from his colleagues for his intellectual firepower and combination of policy and political chops.”

In an exclusive interview with Al-Monitor, Van Hollen praised the current initiative by US Secretary of State John Kerry to organize an international conference on Syria hosted by the United States and Russia. “The only way to get some kind of resolution to the conflict in Syria is through a political negotiating process,” Van Hollen said.

“You have the actors inside Syria, but this has really become a regionalized conflict. It has become part of the larger sectarian conflict in the region with, at the very general level, a Shia-Sunni split here, with lots of different sideshows. So it seems to me that the only way to resolve this is to bring the parties together,” he explained.

“[This] then raises the question, how does US military support to the rebels advance or deter that effort? And my view is, at this time, nobody has demonstrated to me how direct US military support to the rebels would advance our interests in the sense that the potential benefits are greater than the potential risks and cost,” Van Hollen assessed. He added, “My view is that [former US Secretary of State] Colin Powell was right in that you need to figure how you are going to get out before you get all in.

Van Hollen noted the role of “al-Qaeda elements” among Syrian opposition forces, including Jabhat al-Nusra, referring to them as a “toxic stew of groups whose goal is to impose an extremist Salafist state.”

He said that the April kidnappings of the Greek Orthodox archbishop of Aleppo, Boulos Yazigi, and the Syriac archbishop of Aleppo, Yohanna Ibrahim, as well as the murder of a Syriac Orthodox deacon, “raise serious questions about what a post-[Bashar al-] Assad Syria would look like for minority populations, like the Christians.” Van Hollen asked, “Who are our friends [in Syria]?”

The congressman said that President Barack Obama should discuss how to secure the release of those kidnapped with Prime Minister Recep Tayyip Erdogan this week during the Turkish leader's visit to the White House. “I think we need Turkey’s help in resolving this issue, their good offices,” Van Hollen said. “I think that it is something the president should raise.”

Van Hollen endorsed US efforts to unite the Syrian opposition around “a pluralistic vision of post-Assad Syria” and “some clear principles that would call for a post-Assad Syria that recognizes the rule of law, human rights, and the rights of religious minorities in Syria.” He added that is “very important” that the United States play a leading role in providing humanitarian assistance and refugee relief for Syrians and those countries affected by the Syria conflict.

Regional powers, including Turkey, could and should do more in Syria the congressman contends. “Turkey has been critical of the lack of greater US military intervention in Syria, and I guess I would ask the question, this major power on the border of Syria, shouldn’t Turkey be taking more of a lead in this area if that is the path they want to go down?” Van Hollen asked.

“I hope they [Turkey] will support the effort to reach political accommodation and, … I don’t think they should be asking the US for US military intervention when they themselves have not taken any military action,” he said further. “We want to work with Turkey and all regional powers to try and resolve this issue through a negotiated settlement.”

Asked about Iran’s role in Syria, Van Hollen told Al-Monitor, “Iran is clearly involved here. They have been a very, in my view, negative influence. They are obviously supplying Assad with weaponry, they are obviously supplying Hezbollah with weaponry so it is hard to imagine a negotiated resolution to the situation in Syria without Iranian participation of some kind.”

Van Hollen is known nationally for his leadership on budget and domestic issues, but he also has experience in the Middle East and an unusual grasp of the complexities of the region. He coauthored “Chemical Weapons Use Kurdistan: Iraq’s Final Offensive,” a groundbreaking 1988 staff report for the Senate Foreign Relations Committee investigating Iraqi President Saddam Hussein’s use of chemical weapons (CW) on a massive scale against Iraqi Kurds.

The Ronald Reagan administration and other governments at the time had mostly turned a blind eye to chemical weapons use by the Iraqi government in the interest of pressuring Iran during the Iran-Iraq War in the 1980s. The report, by Van Hollen and Peter Galbraith, brought urgent attention to the use of these weapons in Hussein’s “genocidal effort to totally wipe out the Kurds.”

Van Hollen said that the use of chemical weapons in Syria, if proven, would be “unacceptable” and merit a US and international response. “I think that the President is right,” he said, “you have to determine if chemical weapons were used and second who used them.”

“There is a very important factual question here. The UN is looking into it. I don’t think that we should rely only on what the UN says. We should collect the evidence, but it really is important that we get our facts straight here,” Van Hollen asserted. “We should certainly not be taking any action based on misinformation. After all, we know what the consequences of taking actions based on misinformation were in Iraq, and we should be very deliberate in collecting the facts. I do believe that if it is established that Assad gave an order to use CW, that there needs to be a response from the US and the international community, and there needs to be a penalty imposed.… [T]he nature of that response will … have to be in the nature of a deterrent.”

On Iraq, Van Hollen said that the concerns raised prior to the 2003 US-led invasion about an “all-out sectarian conflict” continue to be valid, as the problem is being “exacerbated by the conflict in Syria.” The outcome in Iraq, including the increased influence of Iran there, is another example of the “unintended consequences” of the use of military force, Van Hollen noted.

Van Hollen is a cosponsor of the Nuclear Iran Prevention Act, along with Representative Ed Royce of California, chairman of the House Foreign Affairs Committee, which imposes even further restrictions on commercial and banking transactions with Iran. [See Barabra Slavin’s Al-Monitor interview with Congressman Royce here].

Van Hollen considers sanctions an essential complement to the Obama administration’s diplomatic engagement with Iran. “I would argue that the existence of the sanctions has helped bring the Iranian regime to the table. Whether it is sufficient to be one of the variables as part of getting to an agreement is still unknown, but I do think having the sanctions in place now — and the prospects of getting relief through the sanctions — is incentive to stay at the table, and it certainly helped provide an incentive to get an agreement,” Van Hollen said.

On the recent efforts by the Obama administration regarding the Israeli-Palestinian peace process, Van Holen said, “The president and Secretary Kerry are right to try and revive the peace process. I think it is a very important initiative, and I think that the US can play a very important role trying to bring parties together. My view is that time is ticking on a two-state solution. Meaning, as time goes on, that will be harder and harder to achieve, and yeah, I see that as really the only long-term, viable solution. So if you put those two pieces together, that means that we should be working hard to stimulate, accelerate the peace process.”

“Secretary Kerry and the president, this is something that they are obviously focused on, and I am very supportive of the initiative,” Van Hollen added. “Obviously it is tough timing given everything that is happening in the region, especially with what is going on in Syria. But maybe out of all those different cross-cutting pressures, maybe there will be an opportunity. My view is that you should be poised to take advantage of any opportunity. If you are not in the process then there is no chance. Better to try and create a situation where you can take advantage of opportunities than have one where any opportunities that come up would be squandered.”