The health sector in Algeria has been hit by a massive wave of strikes which, if ignored by the government, could spread and affect the country’s stability, writes Kaci Racelma. 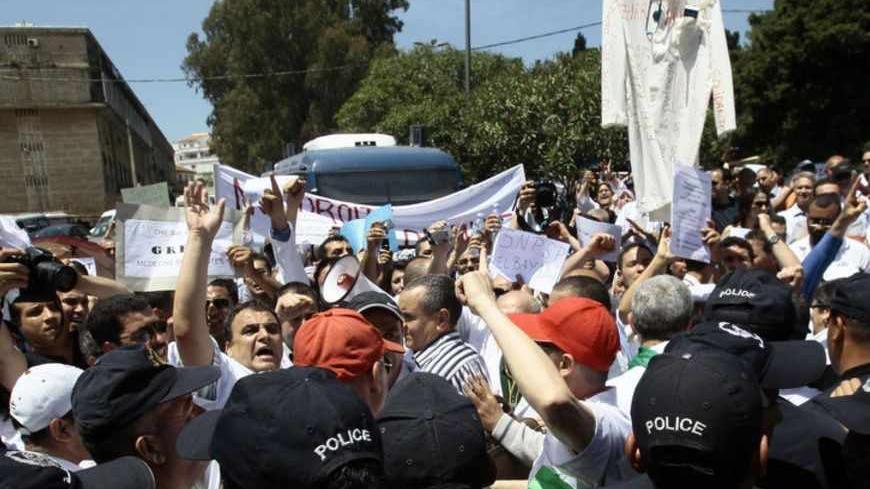 Policemen push medical staff during a protest rally near the Algerian Ministry of Health in Algiers May 8, 2013. - REUTERS/Ramzi Boudina

May has gotten off on the wrong foot in Algeria, where the social front is in full force. This month has not brought any good to alleviate the sorrows of sick patients who are helplessly suffering from the strikes in public hospitals. A week ago, paramedics triggered an unlimited wave of strikes. Their demands can be summarized as a need for training, duty allowances and a benefits system for common services, aides and licensed nurses.

This act of protest comes in the wake of the three-day strike initiated by the paramedical corporation on March 18 — a strike that has not borne any significant fruits. Hospitals and polyclinics as well as other free clinics in the public sector are already affected by this disturbance, to the dismay of patients who do not know what to do.

Patients seeking care will thus have to turn to private institutions, which not everybody can afford.

“We are completely aware of the impact of the protest movement on the patients. However, since we have not received any response from the government, this strike could continue. Patients will have to endure their pain patiently,” Djamila L., a midwife in the Kabylie region, told Al-Monitor.

Both health professionals and citizens have reached the conclusion that “the health sector is not a priority for the government.” Consequently, medical personnel are harshening their tone, while people are threatening to take to the streets if there are no developments in this situation which “has gone on long enough.”

“Patients are in agony. We are currently paying for a cause that is not ours. If no solution is found to this embarrassing situation, protest marches may reassert their rights,” the parent of a patient told us, speaking on condition of anonymity.

The failure of negotiations between the relevant ministry and the various union representatives resulted in the three-day strike on May 6-8. The Inter-union of Health Professionals (ISPS), which includes the National Union of Public Health Practitioners (SNPSP), the Algerian National Union of Psychologists (SNAPSY) and the National Union of Paramedic Education Staff (SNPEPM), notes that its call for this coercive protest is the result of “unmet demands.”

In hospitals across the country’s different regions, chaos and agitation fill the air. Specialized consultations, which patients had access to, will be disrupted, and many will have to wait weeks, if not months, to consult with a specialist. This situation shatters the hopes of many patients who do not know which way to turn. Even in the private sector, some specialties do not exist. This is the case for infectious diseases, which are typically treated in the public domain.

Unsatisfied social and professional demands will certainly give rise to a more complicated situation that is likely to spread to other sectors and jeopardize the country’s stability.

The integration of the 19,000 temporary and contract workers in permanent positions, the recently accorded salary increases by 40% instead of 10% and the participation of the National Union in paying all fees related to the sector as well as in the National Health Policy are all demands waiting to be met by public authorities who are stalling in taking the necessary measures.

At the Ministry of Health, Population and Hospital Reform, there is a struggle to find solutions to this impasse that comes at a crucial moment in the history of the country. While President Abdelaziz Bouteflika receives care abroad at Val de Grace Hospital in France following a cerebrovascular accident (CVA), the social front has dangerously flared up.

“The rally aims at showing our commitment to our social and professional demands,” claim the protesters, who are threatening to continue the protest and harshen their tone if the government does not respect its commitments.