Mohamed Elmenshawy explains why US influence in Egypt is not what many believe it is, or should be. 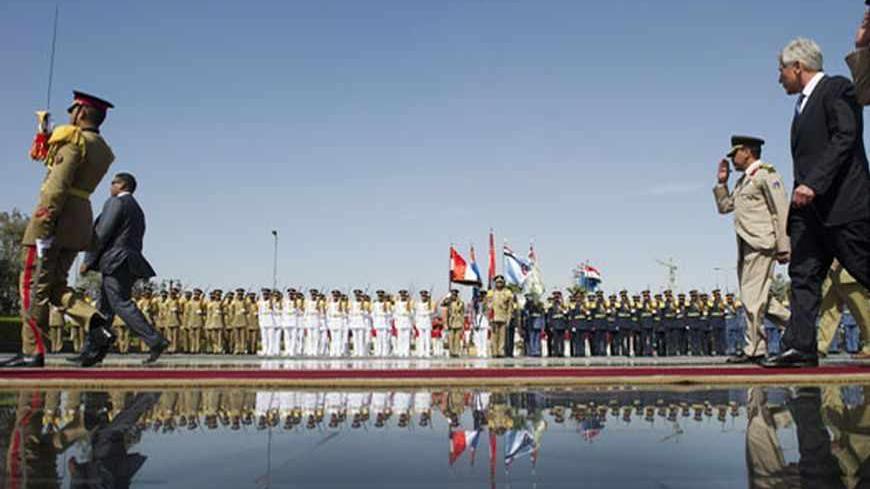 US Defense Secretary Chuck Hagel walks with Egyptian army officials before laying a wreath at the Tomb of the Unknown Soldier in Cairo, April 24, 2013. - REUTERS/Jim Watson
Mohamed Elmenshawy
@@ElmenshawyM
April 28, 2013

Last week’s visit by US Secretary of Defense Chuck Hagel to Cairo came amid several discussions in Washington and Cairo about US leverage in Egyptian politics since Hosni Mubarak’s ouster in February 2011. Most of these discussions overestimate US influence. Indeed, last month’s proposed amendments from both Republican and Democratic senators aiming to attach conditions to military assistance to Egypt reveal an old-fashioned and overconfident understanding of Washington’s sway. The reality is that US influence in Egypt is tempered by a number of factors, including Egyptian domestic politics, funding and the United States’ own need for stability and cooperation in the region. Deconstructing a number of myths that perpetuate the idea of an all-powerful United States may help bring to light the reality of the situation.

Myth  No. 1: The United States has many cards it can play to affect Egyptian domestic politics.

Though it is true that during Mubarak’s presidency Egypt submitted to Washington’s interests on a number of regional issues, the fact remains that Mubarak did not hesitate to assert his authority on the domestic front. For example, despite protests from President George W. Bush, the US press and the US Congress, Mubarak imprisoned Saad Eddin Ibrahim, a US citizen and human rights activist, as well as Ayman Nour, his opponent in the 2005 presidential election. Mubarak did not yield until he voluntarily dropped charges and released Nour in 2009 as a friendly gesture toward the newly elected President Barack Obama.

This streak of independent defiance has perhaps increased in the post-uprising period. Egypt’s domestic political scene now consists of new alliances, competitors and negotiations — all within its own borders. During Secretary of State John Kerry’s visit to Cairo in March 2013, he encouraged the opposition to participate in the elections and President Mohammed Morsi to accept the terms of the proposed International Monerary Fund (IMF) loan. But it is not clear whether they will accept his advice. The opposition will likely continue to boycott the elections, and Morsi will likely be unable to conform to the IMF conditions. Domestic pressures are dominating these decisions, not Washington’s desires.

Myth No. 2: The United States can save the Egyptian economy from its current crisis.

Others point to Washington’s clout with the IMF, which is currently in talks with Egypt regarding a $4.8 billion loan package, as a means by which the United States can help Egypt. Yet, the IMF package comes with many drawbacks. For one, it demands that Morsi’s government cut subsidies on basic items like food and fuel. Such a policy does not acknowledge the principle of social justice that played a prominent role in the revolution and calls for an economy that looks out for the interest of such groups as low-paid workers, unemployed youth and peasants. As a result, the loan is a landmine for Morsi that he will likely sidestep.

In addition, Washington cannot pressure the Arab Gulf countries to give or not give billions of dollars in aid to Egypt. (Hence, Qatar’s recent pledge of $3 billion came as a surprise to the Obama administration.) The experience of the past few years has shown that in spite of the special relationship between the United States and the Gulf states, Washington holds limited real power in the region. Though the Gulf states depend heavily on US military and security protection, they do not bend to the will of Washington when it comes to issues from which they ideologically diverge from the superpower, such as the war in Iraq or the crisis in Syria. Kuwaiti, Emirati and Saudi Arabian leaders are sympathetic to Mubarak and are dissatisfied with the treatment he has received. Such empathy for the fallen dictator is accompanied by a fear of competition from local Muslim Brotherhood branches and other Islamic political currents.

Myth No. 3: Egypt benefits more from the relationship than the United States does.

Since the end of the October War in 1973, Egyptian leaders have chosen to engage in a strategic partnership with Washington. This collaboration offers the United States a unique source of strength, since Egypt enjoys a superior geostrategic position through its control of the Suez Canal — one of the major naval passageways in the world. This advantage for the United States should not be undervalued; if US Congress monetized the strategic worth of movements through the canal, the figure would be in the billions of dollars. The Obama administration's top officials regularly warn Congress that decreasing  military aid to Egypt would be a mistake, claiming that no other country can serve US interests in the Middle East as well as Egypt. Thus, the United States may benefit more from friendly relations with Egypt than vice versa.

A recent change in the Egyptian military leadership adds to this benefit. On August 12, 2012, Morsi announced a series of military appointments that included for the first time in Egypt’s history a minister of defense and a commander in chief of the armed forces who both graduated from US military schools. The US Department of Defense highly values the decision, as it believes that this development will improve cooperation and understanding between the two military establishments.

Egypt under Morsi follows — at least so far — the same policy vis-à-vis Israel as was seen under Mubarak and the Supreme Council of Armed Forces, and the trilateral relationship between Egypt, Israel and the United States has not been largely interrupted by the transfer of power from one entity to another. Every Egyptian ruler in recent history has committed to the Camp David Accords without immunity from the US administration’s sharp criticisms in regard to issues such as guaranteed liberties for women and minorities.

While Morsi’s dealings with Israel have also largely pleased the United States, he angered Washington when he requested the release of Sheikh Abdel-Rahman, who is accused of planning bombings of the World Trade Center in 1993 and is serving a life sentence in a North Carolina prison, as well as when he opposed the French intervention against extremist groups in Mali. And Washington routinely criticizes Morsi’s undemocratic policies, citing the practice of torture and other human rights abuses, censorship of the media and repression of the judiciary.

As such, engaging peacefully with Israel may help keep the United States satisfied with Egypt’s leaders, but it does not guarantee complete approval. While Egypt may feel pressure from Washington regarding Israel, it is thus not trapped through a guarantee of goodwill and may choose to behave differently in the future.

Myth No. 5: The United States brought Morsi to power and can force him out if so desired.

Washington has not personalized its strategic relationship with any political sect in Egypt. In the past two years, the United States has employed the same diplomatic strategy with every Egyptian ruler, be it Mubarak, SCAF or Morsi. Essentially, the United States did not interfere in the election of Morsi, nor did it support one candidate or group over another. The reality is that Washington does not have the power to control the outcome of the Egyptian elections. As such, while awaiting the outcome of the elections, the Obama administration was eagerly anticipating the official announcement of the “legitimate winner” — magic words to US ears.

While Egyptians are creating a new order, pundits in Cairo and Washington choose to deny this reality and Egyptians’ ability to create it. Some in Washington prefer to revel in the illusion of their own importance, threatening to cut off assistance to a country that they need perhaps more than it needs them.

Mohamed Elmenshawy is a scholar at the Middle East Institute in Washington. He writes a weekly article in the Egyptian daily al-Shorouk. He can be reached at mensh70@gmail.com or on Twitter @ElmenshawyM.