Gulf states are lining up to support Egypt after President Mohammed Morsi's ouster, including more than $8 billion in financial assistance, but should do more to ensure the country does not repeat the mistakes of the past. 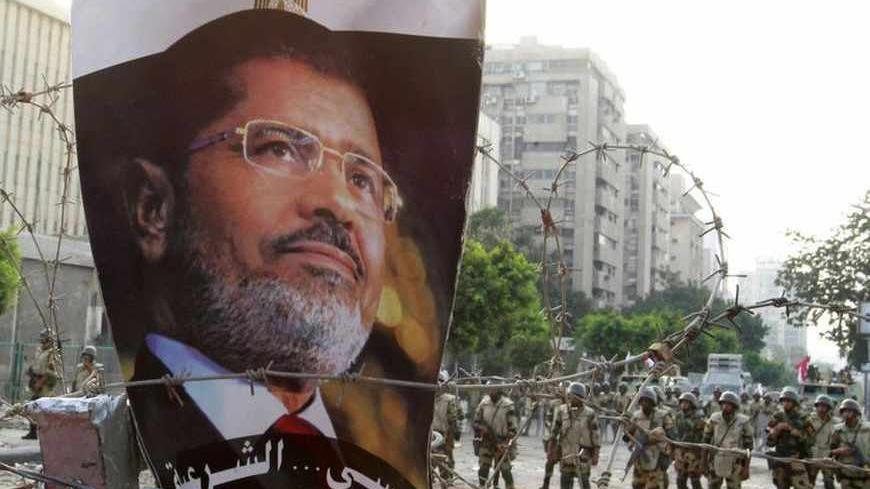 A portrait of deposed Egyptian president Mohammed Morsi is seen on barbed wire outside the Republican Guard headquarters in Cairo, July 8, 2013. - REUTERS/Louafi Larbi

The ousted Muslim Brotherhood’s mismanagement of Egypt extended into various fields, from the social to the political, but perhaps the area that concerns Egyptians the most is its bungling of the Egyptian economy. Prior to being elected, the Brotherhood repeatedly touted its so-called Renaissance Project for the development of Egypt. The plan, the result of years of studies Egyptians were told, was to be implemented in President Mohammed Morsi’s first 100 days.

The plan, however, turned out to be nothing but electioneering rhetoric, with Morsi having “fulfilled only four of his 64 campaign promises,” according to one monitoring group. The Brotherhood government continued to assert its incompetence up to its final days, including the appointment of a member of Gamaa Islamiya as governor of Luxor, a major tourist attraction that was the scene of a bloody massacre perpetrated by the very same group 16 years earlier.

Why Egypt is such a pivotal ally to the Gulf states has been explored in earlier articles. From its sizable army to its strategic location, Egypt’s hard and soft power in Africa, the Mediterranean basin and the Middle East is hard to argue with. Nothing, however, brought this message home faster and more urgently than the rise of the Brotherhood in Egypt. One of the Brotherhood’s rare successes was the speed in which it alienated the Gulf Arab states. The Brotherhood’s overtures to Iran, culminating in a February visit by outgoing president Mahmoud Ahmedinejad, raised alarm bells not only among the Brotherhood’s former Salafi allies, but also in Gulf capitals. Senior Brotherhood leader Essam El Erian, who served as chairman of the Committee on Foreign Relations in the now dissolved People’s Assembly, warned the citizens of the United Arab Emirates that they would become “slaves to the Persians.”

Less than a week after Morsi’s ouster, Saudi Arabia and the UAE on the same day offered Egypt assistance totaling $8 billion. Each would grant Egypt $1 billion and lend it another $2 billion, in the case of the UAE interest free. In addition, the Saudis offered $2 billion worth of oil and gas. Al-Monitor was informed firsthand that the UAE’s assistance to Egypt, announced July 9, is merely the “first step.”

Saudi Arabia’s assistance to Egypt will likely go beyond this individual aid package. The kingdom is a member of the G-20 club, representing the world’s 20 largest economies, and can influence the International Monetary Fund directly as well as via contacts in Washington to finally extend a much-sought $4.8 billion loan for Egypt. This step could not come sooner. Upon former president Hosni Mubarak’s ouster, Egypt had $36 billion in foreign currency reserves. Two and a half years later with Morsi’s ouster, the country has $14.9 billion in reserves. The situation is even more serious when one considers that the previous sum is only sufficient for three months’ worth of imports, with Egypt’s total import bill for 2012 standing at $58.6 billion, according to the country’s Central Bank figures.

Kuwait, among the wealthiest of the Gulf Arab states, steered clear of the Morsi government during the past year due to the Brotherhood’s stance toward the 1990 invasion by Iraqi forces under Saddam Hussein. Back then, according to Wendy Kristianasen of Le Monde Diplomatique, “prominent Brotherhood branches visited Baghdad and issued statements condemning the US presence in Kuwait in language that seemed to support Saddam.” Kuwait, which is no doubt relieved to see the end of the Brotherhood government, announced a major aid package to Egypt on July 10 totaling $4 billion.

Qatar, which had invested a great deal financially, politically and media wise in supporting the Brotherhood, risks having all its investments turn sour. While the Brotherhood was in power, Doha extended Cairo a total of $8 billion in grants and loans as part of an $18 billion financial assistance program. Despite some expectations to the contrary, Qatar issued a press statement the day after the ousting of its close ally “praising the Egyptian army's role in safeguarding Egypt's national security” and adding that it “respected the will of the Egyptian people.” The statement also said that Qatar will continue to support Egypt, omitting any reference to the ousted Brotherhood president and government. Qatar is also expected to soon offer Egypt another aid package, in part to quell any assumptions that its only intent had been to assist a Brotherhood government.

Only with improved education, social development and job creation will the influence of political Islam be eliminated or at least minimized significantly in the Middle East. The corruption, graft and cronyism of the Mubarak regime exacerbated the social ills Egyptians faced, thus culminating in the revolution of January 2011. If the Gulf states are indeed keen not to have Egypt turn back the clock, they should support it beyond mere financial assistance and bank deposits. Helping Egypt improve its broken transport and logistics infrastructure, invest in a better education and medical systems and support small and medium-sized entities with targeted loans will enhance Egyptians’ lives and avoid the mistakes committed by the Mubarak regime. In addition, the Gulf states should urgently establish a free trade zone with Egypt, originally planned more than a decade ago, and immediately exempt Egyptian goods from taxes and bureaucracy.

The billions of dollars in assistance given by Qatar to Egypt did not prevent this most recent ousting of an Egyptian government, thus there should be no assumption on the part of the Gulf states that a second wave of billions of dollars will simply do the trick.

Sultan Sooud Al Qassemi is a commentator on Arab affairs. On Twitter: @SultanAlQassemi