Former Knesset member Yohanan Plesner paved the way for historic change regarding drafting ultra-Orthodox Jews to the IDF, and expresses hope to see this mission completed in an interview with Mazal Mualem. 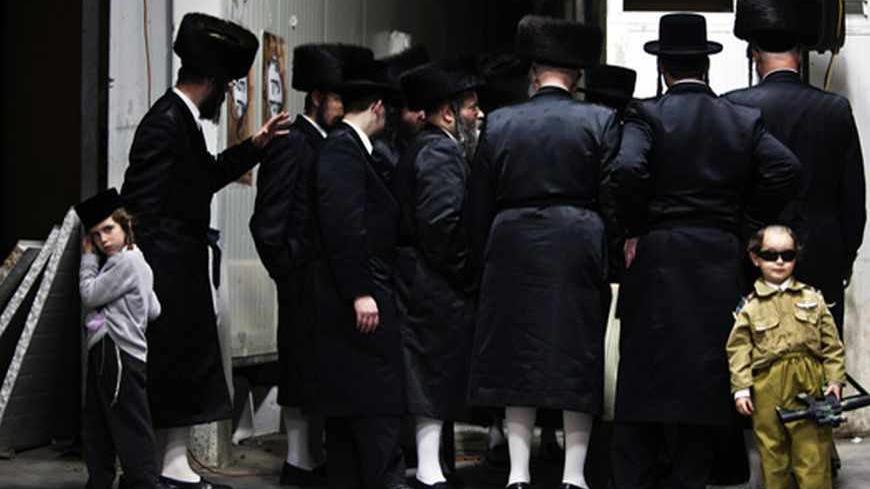 An ultra-Orthodox Jewish boy dressed in a special costume as a soldier for Purim stands next to a group of adults in Bnei Brak, Feb. 23, 2013. - REUTERS/Nir Elias

Former Knesset member Yohanan Plesner paid a steep political price for the determined struggle he led on behalf of drafting ultra-Orthodox Jews into the Israel Defense Forces [IDF]. The recommendations of the Knesset's Committee for the Advancement of Equal Burden that he headed in the previous Knesset (and which bore his name, the "Plesner Committee"), caused the dissolution of the short-lived coalition partnership between Prime Minister Benjamin Netanyahu and Kadima leader Shaul Mofaz, and the breakup of the Kadima party. Ultimately, it also left Plesner stranded outside the Knesset walls.

As one of Israel’s promising and highly regarded Knesset members in recent years, Plesner had presented guidelines for drafting ultra-Orthodox Jews; guidelines that were rejected by Netanyahu in order to save the latter’s partnership with the ultra-Orthodox parties. Plesner consoles himself that those same guidelines are being forced on Netanyahu now after the elections, by Finance Minister Yair Lapid and Trade and Industry Minister Naftali Bennett, as their mandatory condition for joining the government.

In an interview with Al-Monitor, Plesner says that he “prays” for Lapid and Bennett’s success, but worries that something will go wrong. He hopes that by the time the plan will reach the stage for authorization by the government and, soon after, the Knesset — that it won’t be transformed into a toothless law, thus squandering the opportunity for historic change. This week, when Bennett presented the main points of the plan, Plesner sounded somewhat worried.

This is almost a dream come true, as far as you are concerned. The plan you fought for, is being imposed on the prime minister …

“On the one hand, that’s true. The building blocks of the outline as presented by Bennett can generate historic change, but my concern is that until this very day, no enforcement tools have been decided on, to facilitate the conscription of the ultra-Orthodox. In the plan I submitted, I insisted upon economic sanctions — personal and institutional, on the draft-dodgers, as well as those yeshiva institutions that will not meet the draft objectives. I viewed that as a necessary precondition for success of the plan. Meanwhile, no sanctions have been set, and without them there will be no change.”

Plesner adds, “On the one hand, the goals and aims reflect an outline of historic compromise, with graduated implementation of conscription over several years, that will lead to the draft of most of the ultra-Orthodox to significant national service.

“On the other hand, many questions remain regarding enforcement. The plan that was presented, does not detail what tools will be used to implement the law. If ultimately the only sanction will be the abolishment of the 'Kollel stipend' [the stipend distributed by the Ministry of Religion to yeshiva students] to draft dodgers, to the tune of NIS 800 [about $210-$220] a month — that will be a victory for the ultra-Orthodox. The import of that would be that for the first time, a law was legislated allowing them to evade service without significant sanctions.”

Despite the fact that the political conditions that have been created today, are optimal for historic change?

“The conditions for changing reality on the ground today, are the best they have ever been. The second-largest party in the Knesset, Yesh Atid, placed ultra-Orthodox conscription at the top of its agenda. Next to them is another strong party [Habayit HaYehudi], under Naftali Bennett, which is also committed to the issue. And it’s a government without ultra-Orthodox parties. If no change occurs this time around, I don’t know when such a large-scale opportunity like this will ever emerge again.”

And if it is squandered, nevertheless …

“Even according to the most minimalist estimates, the significance of non-conscription of the ultra-Orthodox is expressed by a national product loss of more than ten billion shekels a year [around $3 billion]. These are large-scale figures. And if we look at future trends, we have an even bigger reason for worry: Almost a third of first-grade pupils in recent years, are ultra-Orthodox.

“The significance of this is that in the not-too-distant future, the Israeli welfare state will not be able to provide the same level of services to the citizen, as it does now. We do not have the privilege to choose otherwise. The ultra-Orthodox population is too large for the existing arrangements to continue to remain in place in the future.”

Plesner emphasizes that at this very moment, Israel faces an historic opportunity but also a real danger. “If no change will be generated here, we will slide into a reality where our current model of the people’s army will collapse. We will miss the opportunity to re-shape our social structure into one in which the ultra-Orthodox community will contribute a great deal.”

And what about the argument that the IDF does not need additional man power? That drafting the ultra-Orthodox will only make it difficult for the army, because it will have to make complicated and expensive provisions for absorbing the ultra-Orthodox, with regards to special Kosher foods and separation of the sexes?

“This is an argument that is sounded a lot in an attempt to halt the burden-sharing plan, but it’s nonsense. It has no basis in reality. All the professionals in the IDF testify to the fact that there are large man power gaps in the technical and technological systems, and also in the combat units. In other words, there is a man power shortage that is increasing all the time. In another decade, this trend will only intensify because security threats are growing and the demography is decreasing.”

And what about the Arabs? Haven’t you missed something? If you want equality in sharing the burden, then go all the way …

“We haven’t missed the target. These are two different things altogether. What needs to be done, beyond a significant increase in the number of Arabs serving in civilian national service, is to consolidate an overall national plan that will set a roadmap for imposing service on everyone — including the Arab population.

“There is no professional entity today that knows how to do this correctly. A system has to be set up that will be able to absorb 30,000 Arabs in every draft cycle. This is tremendously large-scale. We have to build, and fund, an entire apparatus of vocational training. And that’s why it would be irresponsible to designate now in the law that all Arabs are required to serve in civilian national service. At the moment, it is impossible to require them to do military service so long as 60% of them define themselves as Palestinians, with whom we are in a state of active conflict.”

Plesner adds, “There is a good reason that equal sharing of the burden became the symbol of the recent elections. People understand that if we don’t take serious action to integrate the Arab and ultra-Orthodox populations, our economy will become like that of a third-world country. We won’t have the resources to maintain a ‘first-world army,’ which is what is required in our world in order to survive.”

And Netanyahu, to what extent is he committed to this? You spent many hours with him …

“When Mofaz and I conducted negotiations with him on the plan, he made the political decision to adhere to the alliance with the ultra-Orthodox, and he paid a price for that. Things changed after the elections. In effect, Netanyahu has received a make-up exam date. Now he has the obligation to take advantage of the opportunity, in what is apparently his last term in office.”

And what about Lapid and Bennett?

“The two of them raised the issue to the national agenda  and knew how to create expectations, but they also have the obligation to stick with the struggle — to be involved in the formulation of the law and ensure its enforcement. It is their lot to have the opportunity to generate historic change but to the same extent, if they do not stand by their principles, they risk generating great disappointment in the public.”

Mazal Mualem started her journalistic career during her military service, where she was assigned to the Bamachane army weekly newspaper. After her studies, she worked for the second-largest Israeli daily, Maariv. In 1998, she joined Haaretz, covering local governance, and later, she was appointed chief political analyst of the paper. After 12 years with Haaretz, she returned to Maariv as their chief political analyst.