In an exclusive interview with Al-Monitor, the deputy foreign minister of the Hamas government, Ghazi Hamad, explains the far-reaching change in attitudes under way in his movement and the unchanged approach of not recognizing Israel. 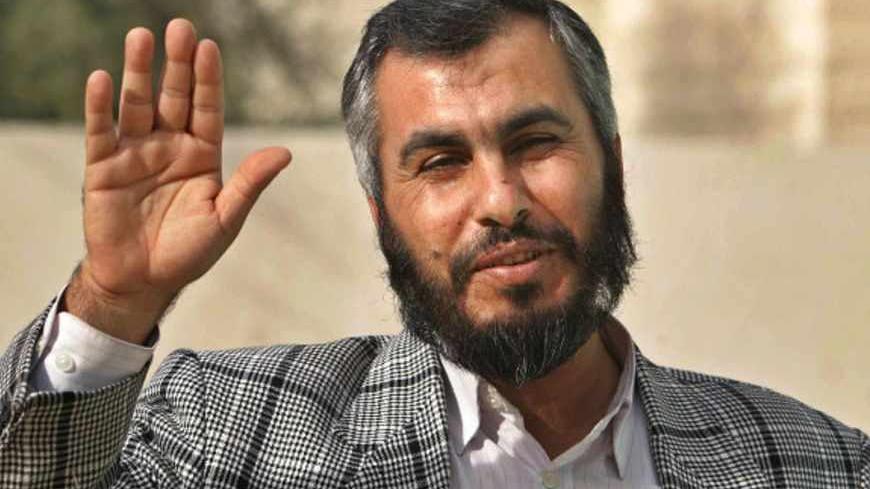 Ghazi Hamad, deputy foreign minister in the Hamas government, is thought to be one of the people spearheading the movement’s pragmatic wing. Two years ago, the secret channel of communication he maintained with Gershon Baskin led to a breakthrough in the protracted negotiations over the release of abducted Israeli soldier Gilad Shalit, in exchange for the release of over 1,000 Palestinians held in Israeli prisons. There can be no doubt that the results of these negotiations earned Hamad a position of honor within the Hamas movement and, more broadly, among the Palestinian public.

Hamad is considered to be very close to Hamas Prime Minister Ismail Haniyeh, whom he once served as spokesman, and to the chief of Hamas' political bureau, Khaled Meshaal, the movement’s newly reelected leader.

In an exclusive interview with Al-Monitor, Hamad analyzes the next steps that his movement will take, now that Khaled Meshaal has been reelected to head its reconstituted political bureau, and following the change within the movement's bureau .

Hamad:  First of all, we must remember that these were democratic elections, and as such, they are a credit to the movement. Elections for Hamas' other institutions ended a year ago, and that was the last time that the Hamas movement expressed confidence in its leaders and their proposal to institute changes to Hamas' policy. This included reconciliation with Fatah, among other things.

Al Monitor:  When you talk about new policy, do you mean an end to the armed struggle and a transition to what Meshaal calls a "popular uprising"?

Hamad:  As leader of the movement, Khaled Meshaal agreed to shift to a popular uprising. All of that began during the reconciliation talks. It emerged from a comprehensive vision of the movement’s future and the type of leadership that the Palestinian people need. And yet, though Meshaal is prepared to make a tactical shift to a popular uprising, armed struggle remains a legitimate right as long as the Occupation continues. At the same time, there is an extensive political and diplomatic program which we must advocate and work toward, and that includes joining the official institutions of the PLO. Those are our objectives, and that is our new approach.

Al Monitor:  Does that include agreement to go back to the 1967 borders?

Hamad:  Hamas has stated that it is prepared to accept a state within the 1967 borders.

Hamad:  We do not say "two states." We agree to the establishment of a Palestinian state with Jerusalem as its capital, within the 1967 borders, and that this would include a solution to the refugee problem. What I can tell you is that all factions in the movement agree to this and are prepared to accept it.

Al Monitor:  And there’s no argument about that?

Hamad:  I can’t tell you that there are no arguments about it. Some people in Hamas contend that Israel is not prepared to accept this principle [of the 1967 borders], as evidenced by its continued construction program in the settlements. However, in more general terms, I will say that Hamas agrees to a state within the 1967 borders.

Hamad:  There is still no change about that. Hamas does not recognize Israel.

Al Monitor:  Dr. Hamad, let’s talk about the next steps. You plan to integrate Hamas into the PLO and to hold elections in the Palestinian Authority. What then?

Hamad:  We would like to join the PLO, but first of all, we propose a structural change to the movement and the way its representatives are elected. There are plenty of problems that must be resolved first. We want to reform the way elections are held, to reformulate the Charter, etc. What I can tell you is that there are people who are working on that, and that once these problems are resolved, we will hold elections, both for Parliament and the presidency. But all of these steps will be taken in accordance with the understandings reached during our reconciliation with Fatah.

Al Monitor:  As Hamas' deputy foreign minister, you are responsible for convincing the American government to remove Hamas from its list of terrorist organizations.

Hamad:  That is a very important issue, and we are hard at work on it. It began once we felt a change after the war on Gaza [Israel's Operation Pillar of Defense]. There has been a change, such as the Muslim Brotherhood’s election in Egypt. It is part of the overall mood internationally. We are trying to convince anyone we can that the Hamas movement is not a terrorist organization. We are engaging with certain sectors in Europe, who are prepared to help us with that, and the reason that they are willing to help is because they are already convinced that it will improve the overall mood in the region. The current reality necessitates it.

Al Monitor:  On a practical level, are you holding direct talks with the Americans about that?

Hamad:  We have no problem conducting talks with the Americans, provided that they are interested. We are prepared to act through all of our institutions to prove that Hamas is not a terrorist organization. Hamas' position is clear. We accept the 1967 borders, and we are active in Europe, where there is a willingness and readiness to help.

Al Monitor:  Which European countries? Can you tell us?

Hamad:  No, but I have spoken with a lot of people who are convinced that Hamas is not a terrorist organization. Hamas put a stop to its resistance [terrorist attacks]. It respects the cease-fire. There has been a major change in policy.

Al Monitor:  Which leads us to the last time missiles were fired from Gaza. Why don’t you stop the Salafist groups, who are firing Qassam rockets and mortars into Israel?

Hamad:  I can say that things are under control. There is a cessation of hostilities. All of the factions are prepared to observe it on the basis of the agreements reached in Cairo. But it is true that there are some people who want to disrupt the calm and cause problems. That would not be beneficial to the people.

Al Monitor:  What are you doing about them?

Hamad:  We do not allow anyone to violate the cease-fire. As long as there is a comprehensive agreement to maintain this cessation of hostilities, everyone must observe it, without exception.