In an exclusive interview with Al-Monitor, Hamas official Mahmoud al-Zahar says "there is no agreement on the 1967 borders." 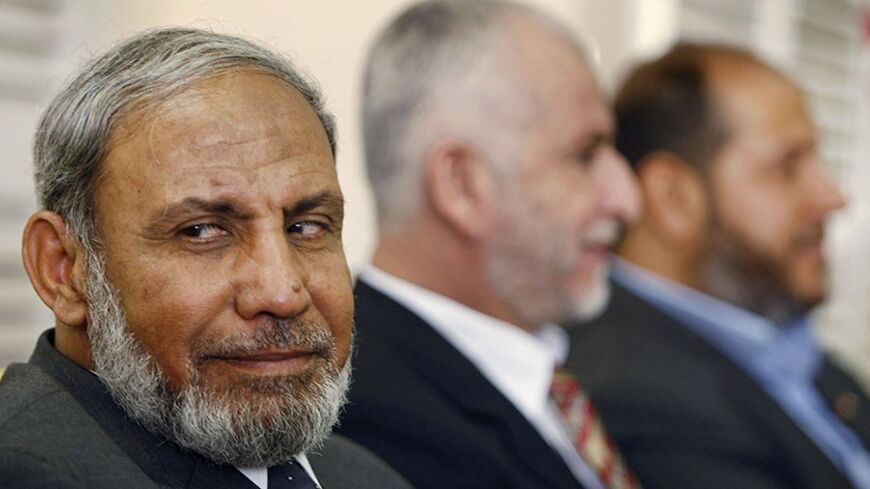 Mahmoud al-Zahar, a member of Hamas’ political leadership, is one of that movement’s most influential figures. In a clash with Zahar, Khaled Meshaal was forced to use all his weight and influence to prevent him from being elected to the movement’s Shura Council (supreme governing body). One year after those elections took place, the situation can be described as follows: Not only did Zahar not lose any of his power, but he actually managed to brace himself and reinforce his position within the movement.

Meshaal, chairman of the Hamas political bureau, has since come under harsh criticism, claiming that his policies and faulty judgment have brought Hamas to one of the most difficult moments in the movement’s history. Under his leadership, the Islamic resistance movement has lost all of its supporters and backers in the Arab world.

In an exclusive interview with Al-Monitor, Zahar says that his movement has deep roots and that it will know how to extricate itself from all its difficulties, just like it did so proudly in the past, despite all the obstacles along the way.

Al-Monitor:  You opposed the policy advocated by Khaled Meshaal. Where do you think he went wrong?

Zahar:  We don’t talk to the media about differences of opinion we might have. We don’t lay them out in public. All of our internal debates, if there are any, are resolved in-house. Even now, I don’t intend to break protocol by talking about it.

Al-Monitor:  But there is no doubt that Hamas is in a complicated situation today.

Zahar:  Listen, the members of the Islamic Mujama [the Islamic Center, established by Hamas founder Sheikh Ahmed Yassin that served as the infrastructure upon which Hamas was established] were in a difficult state for many years. Even when Hamas was faced with occupation, expulsions, assassinations and an unsympathetic Egyptian regime, it knew how to flourish. Let me remind you that under [ousted] Egyptian President Mohammed Morsi, Gaza was sealed off. We got through all of that. We overcame it and we grew despite all the obstacles and difficulties stacked up against us. The only thing that impacted us is that we were physically blocked from reaching Iran. Apart from that, we are in a familiar situation, which we have been dealing with for many years now.

Al-Monitor:  Your status in Iran isn’t like it used to be either.

Zahar:  You can hear all kinds of different statements. One of them is that Hamas was impacted by the change in government and it has problems [as a result], but you can also hear statements saying the opposite. Someone in the US administration claimed that the relationship between Iran and Hamas was not affected. There is a change, but it is not because Iran’s policy toward us has changed. It is because there is a new government in Iran with different priorities. We know that there are differences of opinion and even division within Iran. Those close to [Iranian Supreme Leader Ayatollah Ali] Khamenei, his spirit and the line he advocates say openly, 'We support the Palestinians,' and even add that this support is not a tactical step, but rather the result of a substantive and clear policy.

Al-Monitor:  What will happen if Gen. Abdel Fattah al-Sisi is elected president of Egypt?

Zahar:  Let me clarify something. Even before President Mohammed Morsi was deposed, Abdel Fattah al-Sisi wanted to fight against the chaos in the Sinai. He came and said, 'Help me fight terrorism.’ The world knows that the Muslim Brotherhood is not a terrorist organization, but he linked Hamas and the Muslim Brotherhood; Sisi accuses Hamas of everything that is now happening in Egypt. Those [in Egypt] are the Brotherhood, and those others [in Gaza] are Brotherhood, too. They’re the same thing. He then tells the Egyptian people that he is fighting terrorism. It is convenient for him politically, but none of that is true. There is not an ounce of truth in it. The question is what will happen after the elections. Will this policy continue, or will it change? It is hard to tell. Right now, he wants to impose his power on the Muslim Brotherhood and say that he is fighting terrorism.

Al-Monitor:  So you’ll remain hedged in by Israel and Egypt.

Zahar:  We’ve lived under siege for many years, but the people in Gaza broke through into Egypt. You remember what happened when the walls came down and thousands of people poured into the Sinai. If Israel and Egypt push Hamas into a corner, Hamas will not sit down and take it quietly.

Al-Monitor:  It has been reported that Hamas wants to use former Gaza strongman Mohammed Dahlan’s connection to build a bridge between you and Egypt.

Zahar:  It is a game being played out between Dahlan and [Palestinian President] Mahmoud Abbas. Dahlan is involved in the big crisis in Gaza. He hunted down Hamas’ leadership and members after being ordered to do so by Israel. He has a problem with the people of Gaza, whose children were killed because of him. He is not an acceptable mediator. If the Egyptians want to talk, they can do so directly, without any mediators. There are people in the Egyptian Mukhabarat [Intelligence] who know exactly how to contact us directly.

Al-Monitor:  What is your position regarding the negotiations between Israel and the Palestinian Authority?

Zahar:  In all negotiations, demands are made concerning borders and other significant issues. In the Palestinian issue, no agreements have been reached concerning borders. There are talks about the 1967 borders, but most of the people are unwilling to accept those borders. But let’s start with the assumption that those are the borders under discussion. Even those who agree to accept the 1967 borders still face difficulties. This can’t be implemented. There are settlements. There’s an Israeli presence in the territory and a presence along the eastern border. There’s the issue of Jerusalem and the right of return. Will they eliminate the right of return? Do you think anyone would accept that? Does anyone think that understandings and agreements can be reached for those issues?

Al-Monitor:  Let’s assume that there’s an agreement. What will your response be then?

Zahar:  That is a theoretical question. It makes no sense. Even the negotiators reached the conclusion that they will not be able to come to an agreement. No one will give up the right of return. Besides, Mahmoud Abbas doesn’t represent anyone: not the people living here and not the people living in the diaspora. Can he be the one deciding for them?

Al-Monitor:  In an interview I had with Fatah senior official Jibril Rajoub last week, he said that there are sensible people in Hamas, who would be willing to accept the 1967 borders.

Zahar:  There is a difference between a statement that we are prepared to accept the 1967 borders without recognizing Israel and the claim that we recognize Israel and make do with the 1967 borders. The people [in Hamas] who have said that they are willing to accept the 1967 borders were not properly understood. Take the withdrawal from Gaza for example. We said that we are prepared to end the occupation of Gaza, but that we do not forgo our other demands. That is what Jibril Rajoub did not understand. What do you tell a Palestinian who lived in Haifa or in Jaffa, and now lives outside of Palestine? That this is it? He has no chance of returning? No one has the right to make such a decision.

Al-Monitor:  Let’s be more precise. Are there any people in Hamas who are prepared to accept the 1967 borders?

Al-Monitor:  Where will the Palestinian state be created then?

Zahar:  Wherever it is established, there will be no recognition of Israel. Listen, what has happened to the word 1967 has suddenly become dangerous. It took on an undesirable political meaning, because people didn’t understand us. If we say that we accept the 1967 borders, but do not give up on all our other rights, people take just the first half of the sentence and toss out everything else. That is why our official position today is that there is no agreement on the 1967 borders.

Al-Monitor:  Meanwhile, the members of the Izz ad-Din al-Qassam Brigades secure the border between Gaza and Israel to ensure that no Qassam rockets are fired.

Zahar:  I want to be very clear about this. Not one of them is protecting Israel. What they are doing is intended to serve the Palestinian interest. After the war in Gaza, it was decided to guard the border for two reasons. The first is to ensure that there is no private rocket fire. The second is to declare war against collaborators with Israel and to cut off all ties between them. After they fired on Israel, Israel responded by sending jets over Gaza. It even attacked three targets. That is why we decided to stop guarding the border. You know that there are groups that want to stir up a crisis. We reached agreements with all of those groups that the resistance would be united to prevent any contact between collaborators and Israel. But not one of them is protecting Israel.

Al-Monitor:  What about the efforts to reconcile with Fatah? Where does that stand?

Zahar:  Mahmoud Abbas doesn’t want that. He is under pressure from the Americans and from Israel, but he does not say so explicitly. He can’t say, 'I don’t want reconciliation,' so he puts up obstacles and runs away from reconciliation instead.

Al-Monitor:  You have been making a concerted effort to have Hamas removed from the terrorist blacklist, but with no success until now.

Al-Monitor:  Finally, what do you see as the future of Hamas, in a year, for instance?

Zahar:  Everything changes in the region. Everybody changes. The only thing that remains stable is Hamas, fighting against a single enemy, Israel.