Infrastructure projects have begun in the Gaza Strip under the supervision of Qatar, which granted $400 million to the territory last November, reports Rami Almeghari. 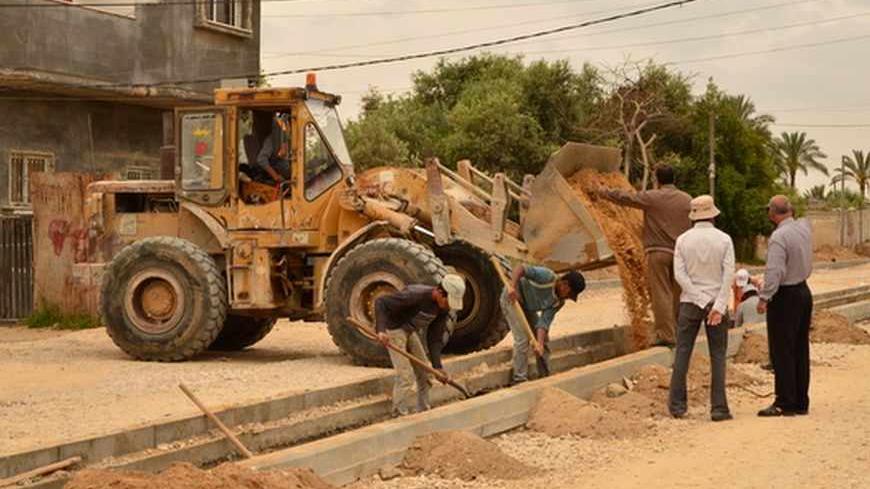 Construction workers work on a road being constructed by a Qatari grant in the Nusierat refugee camp, central Gaza Strip April 11, 2013. - Shadi Alqarra

Hundreds of thousands of Gaza residents will soon be driving on paved roads inside their towns and refugee camps after Qatari-funded construction works kicked off recently. Tens of thousands of other Gazans are also expected to be accommodated in new housing units, courtesy of Qatar’s $400 million pledge to upgrade Gaza’s infrastructure.

"This road represents a new stage of our lives in this part of the Gaza Strip. When I built this house ... in 1990, my neighbors and I would use the main Salah Eldin Road to reach the nearby village of Zawayda. Now we will be able to cut short the distance to Zawayda and other important destinations like schools and medical centers, using,” Refat Hassouna Abu Rabah, a 60-year-old resident of the Nusierat refugee camp in central Gaza Strip, told Al-Monitor.

The road currently under construction in Nuseirat is one of 23 other similar projects across the occupied Gaza Strip, marking the first phase of the rehabilitation of Gaza's infrastructure.

"This road is parallel to the main 40 km-long Salah Eldin road that connects the southern and northern parts of Gaza. Actually, such a project has been pending since 1996 and has been included in the urban schemes of the Nusierat municipality for decades now. Happily, we in the municipality could finally start such a vital project for tens of thousands of our locals here in the camp,” said Khalil Ismail, chief engineer of the Nuseirat municipality.

He added that the road is 1.4 km long and 20 meters wide and will serve the Nusierat area and the Zawayda village, costing just over $1 million.

Engineer Mahmoud Shahin, supervisor of the construction, added that the road will have banks extending from 2.5 meters to 4.5 meters, and that at some points there will be parking lots for vehicles.

"The road is of two sides, as you see, and each side is about seven meters wide, with a 1.5m interval in the middle, equipped with an electricity network for street lights,” Shahin explained.

The Gaza-based Ministry of Public Works and Housing finished bids for the second phase of road construction in the Gaza Strip, which will start in three months. The ministry expects completion of the two phases by the end of the year.

"We are working tirelessly on finishing the first phase, which includes 23 internal roads inside the towns and refugee camps. We have roads being constructed in Nusierat, Alshati, Jabalya, Gaza City and some other locations. By the end of this year, we would have completed construction of about 40 such roads in Gaza," Naji Sarhan, Deputy Minister for Planning and Development Affairs with the Ministry of Public Works and Housing, told Al-Monitor.

The official revealed that the government is planning to start a new phase of construction that includes the development of a new residential district in southern Gaza called Hamad, and a new hospital for artificial limbs in northern Gaza, also to be named Hamad after Qatar’s Emir Hamad bin Khalifa Al-Thani. The Qatari emir visited Gaza in November 2012, declaring the Qatari grant for the Hamas-run territory.

"We have completed the tender process for the second phase of the roads construction as well as for the hospital and the residential town, and we expect infrastructure works to take place soon. In three years from now, all projects covered by the Qatari grant will be completed,” the high-ranking Gaza official added.

Other vital projects to be covered by the Qatari grant include the paving of the Salah Eldin main road for 25 km, as well as the coastal Rashid Road with a similar distance and the Karama Road in eastern Gaza City.

Qatar will be responsible for raw-materials delivery.

Sarhan maintained that in agreement with nearby Egypt, Qatar is solely responsible for the delivery of all needed raw materials, construction tools and machinery for the infrastructure projects in the occupied Gaza Strip.

"Since the beginning of January, we have been receiving shipments of raw materials, including base course for roads and cement, quite regularly directly via the Rafah crossing terminal on the Gaza-Egypt border,” Sarhan said.

The official also added that the Hamas-run government does not oversee the funds, but rather a representative for Qatar in Gaza.

“Neither we, the Gaza government nor the various municipalities are in charge of the Qatari funds. A representative for the Qatari grant in Gaza, who stays in a northern Gaza hotel, is the one who coordinates financial issues directly with construction contracting companies that have won our tenders,” Sarhan said.

Qatar’s active involvement in Gaza comes at a time of growing regional prominence for the tiny oil-rich Gulf state. Moeen Rajjab, economics professor at Al-Azhar University in Gaza, said that while Qatar could assume “an effective role at the international level,” Palestinian reconciliation must come from within.

"Palestinian President Mahmoud Abbas has been maintaining good ties with Qatar. The government here in Gaza should not get too excited about any external political support, and I totally believe that a solidification of the Palestinian internal front comes mainly from inside. Palestinians should reunite for the sake of their own common cause, the conflict with Israel. Qatar, using its privilege now, can do a lot for the sake of improving the lives of Palestinians, not only here in Gaza, but also in the West Bank,” said the Gaza-based economist.

The infrastructure projects are the first of their kind in the occupied coastal enclave in six years. In March 2009, and two months after Israel's devastating war on Gaza, key international players and donor countries pledged in the Egyptian resort town of Sharm el-Sheikh $4 billion to reconstruct war-torn Gaza, none of which has been realized.