Two exiled Palestinian prisoners have opened a dessert shop in Gaza offering a delicacy from the West Bank, which is proving popular among locals, Abeer Ayyoub writes. 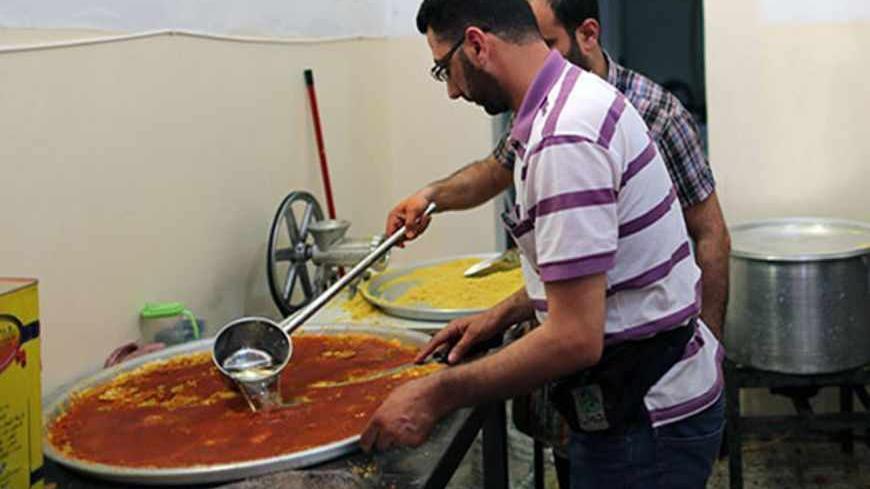 GAZA CITY, Gaza Strip — It took Nader Abu Turki, a freed prisoner from the West Bank who was deported to Gaza, more than a year to realize how nostalgic people in Gaza miss the desserts made in his home city of Nablus.

So, he teamed up with another ex-prisoner, Hammouda Salah from Nablus, who was also expelled to Gaza as part of an exchange deal between Hamas and Israel in 2011, and opened a beachside shop selling nabulsia, the famed kenafah dessert which originated in Salah's hometown.

The nabulsia is made of soft white cheese, topped with pastry noodles or orange-hued phyllo dough and dappled with a sweet syrup.

The two had each thought of the project separately, but were not able to support their ideas individually due to a lack of funds. They realized they shared the same objective when they met in a deported prisoners’ gathering in Gaza, and decided to open their shop, Al-Nabulsy.

“Only then, we decided to cooperate and seriously go ahead with the project,” Hammouda explained to Al-Monitor.

Abu Turki, who had been seeking a partner to both fund and work in the shop, said that he got the experience of making kenafah when he was in jail.

“For almost 13 years in the Israeli jail, I was the best at making kenafah. However, I was depending on the basic materials available at the prison,” said Abu Turki, while manually rotating the tray on fire.

After being deported, Abu Turki, 39, and his business partner Salah, 37, spent more than a year without jobs in their new exile.

Roughly 160 of the 1,000 Palestinians released in the prisoner exchange deal were deported to Gaza.

Nabulsia was easily accessible before the outbreak of the second intifada in 2000, with contact and movement frequent between the two occupied Palestinian territories.

Israel began restricting the movement of people between the two territories gradually as the intifada progressed. The restriction tightened following Hamas’ capture of Israeli soldier Gilad Shalit, with Israel limiting movement to the West Bank to occasional humanitarian and business purposes.

But with Abu Turki and Salah opening Al-Nabulsy in the besieged coastal enclave, Gaza’s Palestinians once again became reacquainted with a missed flavor.

“We wanted to bring something from our culture here so we can feel integrated in Gaza’s society, and thanks to God, it has worked as planned,” Abu Turki said.

Abu Turki said that his friends in the West Bank volunteered to give him “the trade secret” as a gesture of support.

Queues of customers wait outside the small, 4-meter square shop, and with a lack of capacity, the pair are struggling to keep up with demand.

Mustafa Muhammad, 32, a customer waiting in the queue, said that he heard about the shop and felt curious to check it out.

“I’m coming today to support the deported prisoners in Gaza, to encourage them, and to be a part of society,” Mustafa said.

Fatma Ashour, 30, a lawyer, said that she’s planning to go to the newly-opened shop only because she loves kenafah.

“I don’t look at the deported prisoners as people with special needs, they are strugglers and only deserve respect, not pity,” Ashour explained.

Abu Turki said that he and his colleague never expected this volume of success. “If we knew it would be this way, we would have probably tried to get more funds and expand the shop.”

Hammam Qufisha, 14, a son of another deported prisoner from Hebron to Gaza, was helping the five workers, including the owners, in the shop.  Qufisha said that he comes to the shop every day to help.

“After I finish my school in the morning and get my housework done, I come here to help Nader and Hammouda in their heavy work,” Qufisha interruptedly said while responding to customer orders.

Although he misses his hometown of Hebron, the 14-year-old says he is finding his feet in Gaza.

“I’ve been to Hebron only once since I moved to Gaza, I’m missing it. But I’ve started to make good friends here in Gaza. People in Gaza are very kind and helpful.”