Daoud Kuttab interviews Tariq Abu Hamdia, son of Maysara Abu Hamdia, who died April 2 in an Israeli prison despite appeals for him to be released for cancer treatment, which he never received. 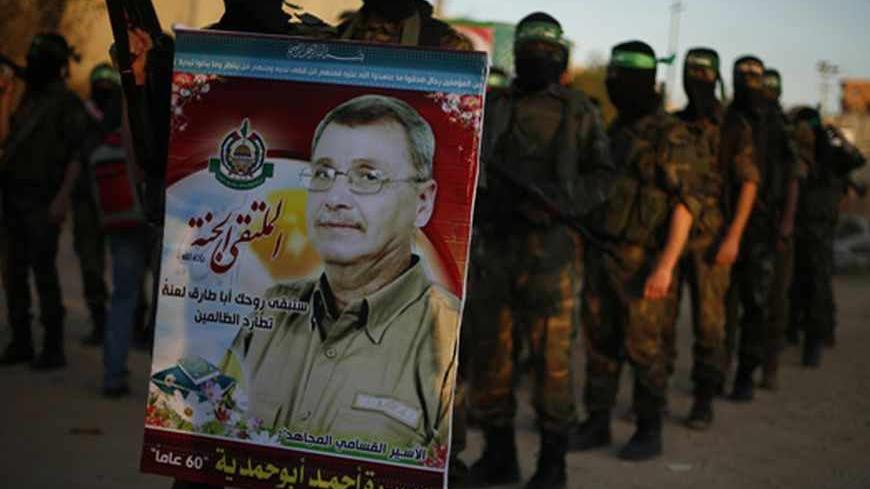 A Hamas militant holds a poster of Maysara Abu Hamdia before a protest in the northern Gaza Strip, April 2, 2013. - REUTERS/Suhaib Salem

When President Barack Obama visited Bethlehem, the loudest group of protesters were families of Palestinian prisoners, many of whom have husbands and sons locked up in Israeli jails. Some of the families were demanding that the Israelis honor promises made to release those held from before the Oslo agreements, other families complained that they have not been allowed to meet their loved ones for years. Yet, a third group said sick prisoners were not receiving appropriate medical care. According to the son of Maysara Abu Hamdia, who died Tuesday [April 2] after his cancer went untreated, that is exactly what happened.

Maysara Abu Hamdia, 64, was a colonel with the Palestinian Preventive Security Service in 2002 when he was arrested and charged with multiple offenses, mostly assisting Hamas operatives. According to Tariq Abu Hamdia, the prisoner’s oldest son, the Israelis had nothing on his father. They couldn’t extract a confession and had no serious evidence,” he said in a phone interview from Virginia Tech where he is finishing his Ph.D. in mechanical engineering.

Tariq says, while his father was serving his prison term in the Remon prison, his health began to deteriorate. “Last August, my dad started to have a bad cough, sometimes coughing up blood. He had a hard time swallowing and his repeated requests for treatment went unanswered.” Tariq says it took five months before an Israeli prison doctor checked him and told the old man that he had throat cancer.

“But they didn’t treat him even after telling him that he had cancer.”

It took the Israeli prison authorities two more months before they officially informed the Palestinian government of Maysara's condition. Palestinian Prisoner Minister Issa Qaraqae told his family that he was promised by the Israelis that Maysara would be released or at least allowed to be treated abroad. But nothing happened. Israeli prison services said that they would begin chemotherapy treatment, but this promise went unfulfilled.

“They did take my dad to an Israeli hospital but it was for a checkup rather than treatment. He never got chemotherapy treatment,” Tariq insists. Zahira Tamimi, Maysara’s wife, was allowed to see her ailing husband early in March. When he saw her, he told that her that he would not agree to go to hospital in the same way again. According to Tariq, his cancer-striken father had been sent to the hospital along with other prisoners in a prison truck. "If they will not take me by ambulance, I rather die in prison," he is said to have told his wife.

As Maysara’s condition worsened, his son Ala’a was allowed to visit.

When he made it to Remon prison, he found his father in a prison clinic unable to speak and unable to take any solid food. “They had no glucose at the prison clinic,” Tariq said.

Four days ago, Maysara fainted at the prison clinic and prison officials transferred him to the nearby Soroko hospital. Yet, even in this condition, Tariq says, they had his hands and legs shackled to the hospital bed and he had three prison guards watching him.

Family requests to obtain his medical reports were regularly refused.

Tariq says that Red Cross officials have told him that the Israelis are routinely refusing to give medical records to families of prisoners, in violation of international humanitarian law. “They are afraid of giving away any documents that can be used against them,” says Tariq.

According to Palestinian officials, 25 other Palestinians are also suffering from cancer. Others suffer from a number of other long-term illnesses. Palestinians in four Israeli jails reacted to Maysara’s death with protests and rioting.

As the oldest son, Tariq was asked by the Palestinian government if he's OK with the Palestinians conducting an autopsy. He agreed. “I want everyone to know about his condition.”

He said that his father’s death was caused by negligence. Tariq is also unhappy with the Palestinian government for abandoning his father even though he was a senior member of Palestinian security. He feels that the Palestinian leadership should do more for prisoners, or quit, stating: "So long as they claim to represent the Palestinian people, they must carry out their responsibility toward Palestinians or otherwise leave that position.”

Palestinian President Mahmoud Abbas and senior Palestinian officials have publicly accused Israel of medical negligence. “The death of Maysara Abu Hamdia shows the Israeli government's arrogance and intransigence over the prisoners. We tried to get him released for treatment but the Israeli government refused to let him out, which led to his death."

Tariq Abu Hamdia says that he prays that his father’s death isn't in vain. "I hope that his case will bring focus to Palestinian prison conditions, especially to those with medical problems."