Mahmoud Ahmadinejad may become the first former president under Ayatollah Khamenei to spend part of his retirement under house arrest, writes Meir Javendanfar. 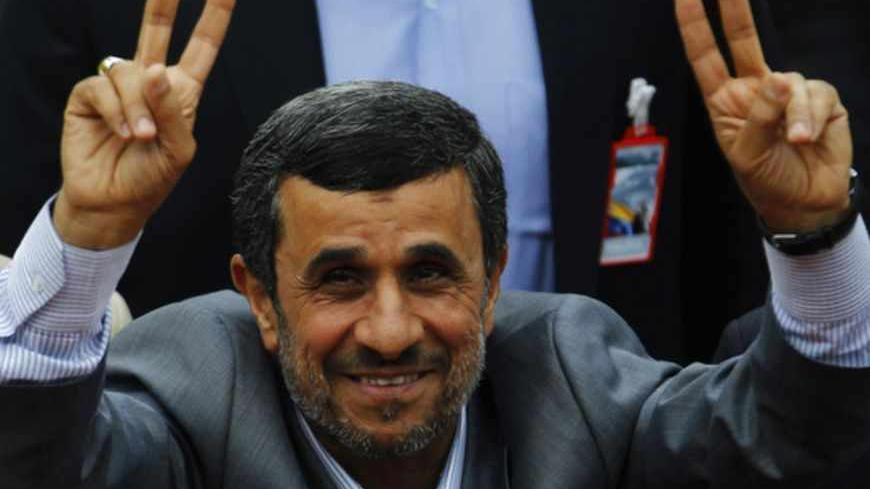 Until recently, Iranian President Mahmoud Ahmadinejad behaved like a boxer who always knew that in fights against his rivals, the referee (i.e., the Iranian supreme leader) would back him. And he was right. The referee, who clearly favored him, was willing to overlook many things in his favor. In some cases, he also helped him, overtly and covertly. As Khamenei is Iran's most powerful authority, there was little that Ahmadinejad's rivals could do. Those days are gone.

Ahmadinejad has six weeks left in office — six weeks in the highest political office he has ever held and is likely ever to hold in his entire political life. What’s worse for him, however, is that his rivals know that the supreme leader will no longer be willing to throw fights his way, so they are going after him, verbally and politically. Until Ahmadinejad leaves office, the pent up anger felt by his rivals for the last eight years will continue to manifest itself in blows against him, and things could get much worse after he leaves office. At that point, the attacks could become more frequent and more merciless.

Ahmadinejad has two options: to defend himself now, with all his might, to try to deter his rivals from attacking him after he leaves office or to hold his fire until after he steps down. Both options have advantages and disadvantages.

Going after his rivals while in office might deter them from future attacks, but it could also anger the supreme leader, as elections are a sensitive time for him. This would translate into even less support from Khamenei once he leaves office. By holding fire until after his term, Ahmadinejad will have much less power and influence at his disposal. Lack of action might also be interpreted as a sign of weakness by his rivals. This is, indeed, a dilemma.

For now, Ahmadinejad seems to be taking the option to ward off his rivals. This has included threatening to reveal their corrupt dealings and practices and in one case following through on his threat. The latter took place in early February, when Ahmadinejad aired tapes showing the brother of his rival Ali Larijani asking for bribes. There were also reports by the Iranian website BAZTAB that Ahmadinejad had taped evidence of cheating during the 2009 elections (oddly enough in his favor). The article that published this report was soon removed, and Ahmadinejad's office denied the story.

Now Ahmadinejad is taking the battle to the next stage: the elections process. For years, the Interior Ministry has been in charge of overseeing elections. Although the interior minister is typically considered close to the supreme leader, the president, nevertheless, has some influence in the all-important ministry.

Worried about Ahmadinejad using his influence over the Interior Ministry to promote his right-hand man, Esfandiyar Rahim Mashaei, the Iranian parliament passed a new law for the supervision of elections, and the Council of Guardians approved it in January this year. According to the law, in supervising elections, the Interior Ministry will act as part of an Elections Central Executive Committee, which will include the minister of intelligence, head of the country's judiciary, and an appointee from the Majles. All the involved institutions are staunchly pro-Khamenei, and in fact, the intelligence minister and the country's top judge are his appointees. Meanwhile, the interior minister has to nominate 30 religious, political, cultural and society personalities to the oversight committee of the Council of Guardians so that they can be vetted and seven of them appointed to the Elections Central Executive Committee.

Ahmadinejad saw the new law as a challenge to him by his rivals. To retaliate, he has held off nominating the 30 people to the Council of Guardians committee, although it was requested that he do so in mid-February. This response has raised the ire of Ahmadinejad's rivals so much so that he is being accused of playing “dangerous games” and warned that his behavior is “preparing for sedition before the elections.”

With six weeks before the presidential elections, Ahmadinejad seems to be trying to use the electoral process and his remaining influence over it to show his teeth. By doing so, he is also hoping to send a warning to his rivals. He also seems to be using his influence as political leverage to improve Meshai's chances of being approved by the Council of Guardians, should he decide to run.

This is a gamble. Should Ahmadinejad continue to drag his feet, Khamenei could simply appoint seven people himself. Judging by the reported cheating in the 2009 elections, fairness and procedure are not exactly the supreme leader's priorities.

If such a scenario were to unfold, Ahmadinejad might feel cornered and even more threatened, thus forcing him to react. This could include revealing more secrets about regime officials, which would lead to even more infighting and instability while damaging the legitimacy of the entire regime. If so, soon after the elections, Ahmadinejad would find himself pursued and possibly under house arrest. This scenario cannot be dismissed, given the sensitivity Khamenei has recently shown to those seen as destablizing elements. More important, the supreme leader needs to show that he will not stand by while his government officials spy on each other and use intelligence material to settle scores.

Regardless of what happens, upon leaving office, Ahmadinejad will join the three-member club of former presidents who served under Khamenei and then fell out of his favor. Whether Ahmadinejad will be the first member of the club to serve part of his retirement under house arrest depends on him.

Meir Javedanfar is an Iranian-Israeli Middle East analyst. He teaches contemporary Iranian politics at the Interdisciplinary Center in Herzliya.