Hezbollah Base Questions Support for Assad

With Hezbollah members increasingly dying in Syria, some of the party’s base are re-evaluating its role in the conflict, writes an Al-Monitor correspondent in Beirut. 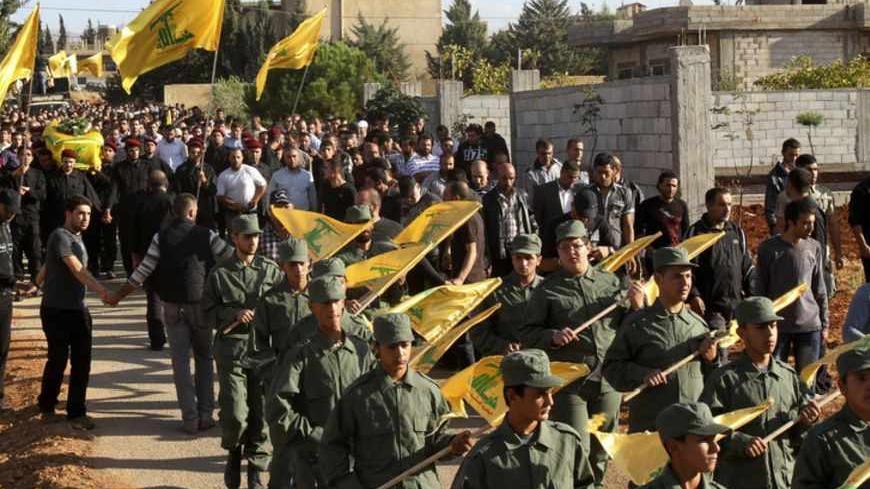 There is growing talk within the Shiite community in Lebanon about Hezbollah's new front aimed at defending the regime of President Bashar al-Assad in Syria. Villages in the Bekaa valley and the south, the strongholds of the party's social base, are beginning to bear the brunt of the war, as they receive the bodies of their sons who died on distant fronts in Syria.

A few days ago, the village of Mays al-Jabal, in the far south near the border with Israel, buried a young Hezbollah member who had gone to Syria just days before and returned wrapped in a party flag. Upon the arrival of his body in the village, a group of Hezbollah members wearing black uniforms received him and accompanied his coffin in a military procession to his parents' home. Among the masses of women dressed in black stood a large woman who broke into loud chants, a tradition of the region's inhabitants when they received the remains of martyrs who had fallen in the face of the Israeli army during its occupation of southern Lebanon. The relatives of Fayez, the fighter who had died in Syria, gave the chant a lukewarm response. His mother stepped aside, her forehead covered in dust, and lost consciousness for a moment as her husband glanced at her with sadness.

Meanwhile, an Israeli warplane left a white trail in the sky as it crossed the area at high altitude. The mourners barely notice these planes, as they have become accustomed to hearing them break the sound barrier on an almost daily basis. The appearance of the Israeli plane at that moment, however, perhaps signified a message to the children of the village — “their fight on the distant front in Syria is taking place while the immediate front with Israel still warns of possible war.” The mourners' steps were marred with frustration. They marched behind a group of party members who carried the coffin of Fayez that had come from the distant front in northern Syria to the cemetery of his hometown in southern Lebanon.

At any moment, any of the mourners might have broken the silence and voiced an objection to the killing of their sons in Syria. “It is simply not our war,” said one of the village residents speaking to Al-Monitor in a hushed voice. According to this citizen, in the past, “Villages in southern Lebanon supported Hezbollah because it defended our land against Israel, and we did not care about the number of our sons who died as martyrs in the party’s ranks. Today, however, the party is leading us into a battle that has nothing to do with defending our land against Israel. We support the Syrian regime, but it is not our duty to defend it. This is the duty of the Syrian army alone. President Assad helped us during the war of 2006 when Israel attacked us, but he did not fight in our place.”

The number of those raising questions among Hezbollah’s social base is increasing, although it remains small for now. It is not easy to show public opposition to the party within the Shiite social milieu, especially in remote regions, in southern Lebanon and in the Bekaa. The main cities in these areas are being shelled by the Free Syrian Army, namely in Hermel, which is home to a Shiite majority that supports the party.

Over the past three decades, the party has built deep social, cultural, economic and partisan structures in these areas. It is now in control of the region’s general climate on several levels, but the party now realizes that it faces a problem with its base against the backdrop of its descent into the Syrian war. Party supporters are not ready to offer their sons as martyrs for the sake of keeping Assad in power. The party is also aware that this sentiment is likely to spread should it not be addressed in a wise and thoughtful way.

Traditionally, whenever questions arise among party's supporters, Hezbollah Secretary-General Hassan Nasrallah has relied on the public confidence he enjoys and delivered a speech in which he explains the situation and reveals his thoughts on the ambiguity in question. This usually restores harmony between the party and supporters. Thus, Nasrallah is widely expected to make a televised speech in the next few days in order to explain the reasons that have prompted the party to fight in Syria and to indirectly try to calm the rising tide of questions by Lebanon’s Shiites concerning this decision.

One can already predict the main justifications he will offer: Hezbollah is engaged in a defensive battle because the party is fighting in Lebanese Shiite villages in Syrian territory, and Jabhat al-Nusra is waging a war of displacement in these areas. The villages, which number 11, are considered a geographic mistake created by the Sykes-Picot division. The border was drawn in such a way that these villages inhabited by Lebanese Shiites from families in the Hermel region in Lebanon fell inside Syrian territory. While the villages remain in Syria, their residents are legally considered Lebanese citizens.

But Nasrallah's justification — defense of Shiite villages — is not likely to be enough this time, as its members are fighting in different areas in Syria. The last martyr to fall in the north was fighting with Syrian army convoys on their way to expel the opposition from the town of Maarat Numan, whose fall could pave the way for a decisive attack on Aleppo, according to sources close to the regime.

Amid growing uncertainty on the part of Hezbollah and its realization that its social base needs some persuading to calm concerns about the killing of its sons in Syria, Hezbollah’s so-called doctrinal mobilization commissions have recently set to work, sending a photograph by e-mail to thousands of supporters. The picture shows Ayatollah Ali Khamenei, the supreme leader of Iran, standing next to Nasrallah. Those who thoroughly examine the picture will note that it is a recent one.

According to sources close to the party and familiar with its rationale, the release of this image at this time was aimed at suggesting to party supporters that the decision to fight in Syria was taken by Khamenei because of the urgent need to avert the serious threat that would befall Shiites in the region if the Assad regime were to fall. It is known that Khamenei's words have a special resonance among a wide swath of Shiites in Lebanon and throughout the world. He is a representative of Imam Mahdi, who, according to Shiite tradition, is expected to reappear to save them from “injustice.”

Despite his influence among Shiites in Lebanon, it appears that Nasrallah faces a real challenge in persuading them to pay with blood in support of Assad, and thus he truly needs the cover of Imam Mahdi on the ground.