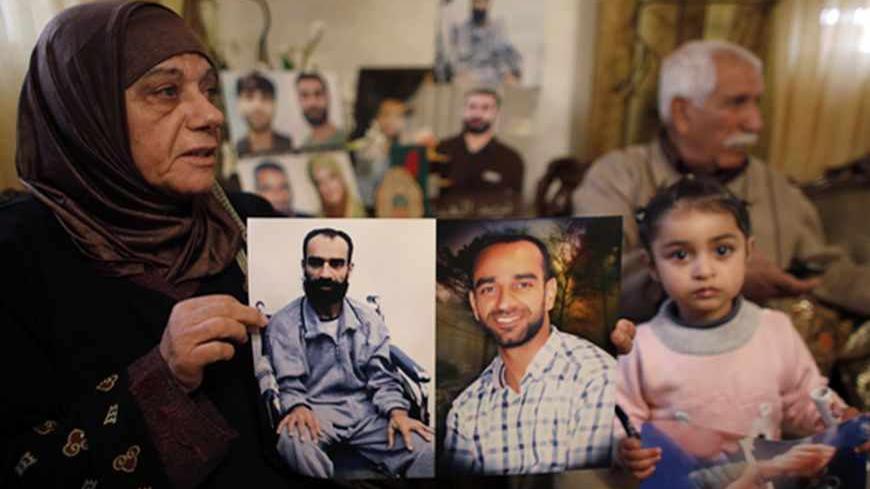 Layla Issawi holds a picture of her son Samer, who has been on hunger strike for 209 days while being held in an Israeli prison, at her home in the east Jerusalem neighborhood of Issawiya, Feb. 17, 2013. - REUTERS/Ammar Awad

For over three weeks, Tamar Fleischman has been coming to Kaplan Hospital in Rehovot, Israel, with a small bouquet of flowers. Once there, she makes her way to Internal Medicine D, room 15, where Palestinian hunger striker Samer Issawi is lying on his deathbed. Fleischman wants to hand him the flowers and tell him that she and many other women like her identify with his situation and are worried about him, but she is blocked again and again by prison service guards. Still, she keeps trying.

Fleischman is a leading activist in Machsom (Checkpoint) Watch, an Israeli women’s group established in 2001 to oppose the occupation and the denial of freedom of movement to Palestinians. She volunteers there every day. Nevertheless, in an interview with Al-Monitor, she says that she is not acting on behalf of that group when she visits the hospital and tries to see Is sawi. She is acting as “a private individual and an Israeli citizen who is worried about him.”

So you just decided to buy flowers and visit him?

“Yes. I read in the newspaper that he was hospitalized at Kaplan, and I couldn’t just let that go by. I went with a friend. They didn’t expect us, and when the guards saw us, they jumped up and blocked our way. Still, we were able to relay the message that there are people here who are concerned about his well-being.''

“I didn’t know him before this,” she emphasizes, “but there was a blatant violation of an agreement signed by the state, and that’s not the only problem either. What he is experiencing now is torture.”

Samer Issawi was the name heard most frequently during the demonstrations on behalf of Palestinian security detainees, held about a month and a half ago. Issawi, a resident of the village of Issawiya in the East Jerusalem area, was originally released from prison in the October 2011 Shalit Deal. He was arrested again in August 2012 on allegations that he violated the terms of his release when he left Jerusalem to go to the West Bank. The military prosecutor claimed that it has “confidential evidence” that Issawi went back to engaging in proscribed activities. According to security order 1677, the military committee is allowed to request his return to prison to finish the remainder of his original sentence for violating the terms of his release. In Issawi’s case, this means 26 years for membership in the Democratic Front for the Liberation of Palestine (DFLP), attempt to cause grievous bodily harm, possession of weapons, the sale of military equipment and participation in military exercises.

Ever since his arrest eight months ago, he has been on intermittent hunger strikes [According to activists, he takes vitamins to keep himself alive]. He now weighs 45 kg. (99 lbs.) and is kept under constant medical supervision at Kaplan Hospital.

“The first time I went there, I asked where he was and walked right into the ward. The nurse immediately went and called the prison guards, who blocked my way. I stood there holding flowers and a letter in Hebrew and Arabic, which said, ‘Samer Issawi has friends in Palestine and Israel who are worried about him.’ They wouldn’t let us in, but one member of the medical team promised to relay the content of the letter to him. I promised to come back.”

And you went back?

“A week later. It was around noon, and rather sluggish at the hospital, so the door was open. I didn’t ask for anyone’s permission. I just walked right in and found myself beside his bed. Three prison guards jumped out of their seats, but I was already standing beside him, talking to him. He straightened up, smiled, nodded and was silent. The guards looked startled. ‘What are you doing?’ they asked me. ‘What group are you with?’ I told them that my name is Tamar, and that I was not there on behalf of any organization. I explained that I was a private citizen who was deeply concerned about the well-being of a man starving to death because the state has callously determined his fate. Then they threw me out.”

How did he look? Were you able to assess his condition?

“He looked like a skeleton of a man. His hollow face has been swallowed up by his beard. Only his eyes stood out, and unnaturally at that. They were huge and they glistened, which is symptomatic of people who are starving. It looked like he was vanishing into himself.”

Did he say anything when you spoke to him? Or when you argued with the guards?

“He didn’t say a word, but he understood. I could see it in the way he looked at us. His face responded. He smiled. The whole encounter was brief, but there was so much there. So much. There was something succinct about that moment, which is very important to me. I don’t know how he feels about this, but I assume that just knowing there are people in Israel who oppose his arrest and support him is important to him.”

Apart from being held in isolation, Tamar claims that he might also be shackled, despite the fact that his medical condition has left him so weak that he can’t even get a word out. She reached this conclusion after listening to one of the doctors who told her, “He’s not shackled when I treat him. I’m not responsible for what happens when he is being held by his jailers.”

Did you see shackles?

“No, his body was covered with a blanket that reached past his shoulders.”

News of Tamar Fleischman’s repeated visits to the Department of Internal Medicine D at Kaplan Hospital spread quickly and started an interesting phenomenon. Almost every day, Israeli women from across the country arrive at the ward where Issawi is held. They bring flowers and try to see him, or at least make sure that he hears their voices.

“It started with some friends of mine, but it grew to include women I don’t know. This began to annoy the medical team and the prison service. I went there a few days ago, knocked on the door and went back in, but this time they were ready for me. They immediately threw me out. All I could see was the curtain between his bed and the door that they had drawn, which has made it impossible to see Samer Issawi anymore. But it is possible to speak to him. I spoke loudly to the guards, so that he could hear, and I told them that we will keep coming back even if they won’t let us see him, because there is nothing to prevent us from entering a public space.”

Why are you really doing this?

“Because it’s very important to me. I care about this country’s society, its future. It’s important to me that things change here. Israel is the one place that I am connected to with every fiber of my being. It is my place, for good and for bad. My job is to make it less bad.”

What do you think will happen if he dies?