The Syrian conflict is increasing the danger of a sectarian war in Iraq, Ambassador Nassif Hitti writes. 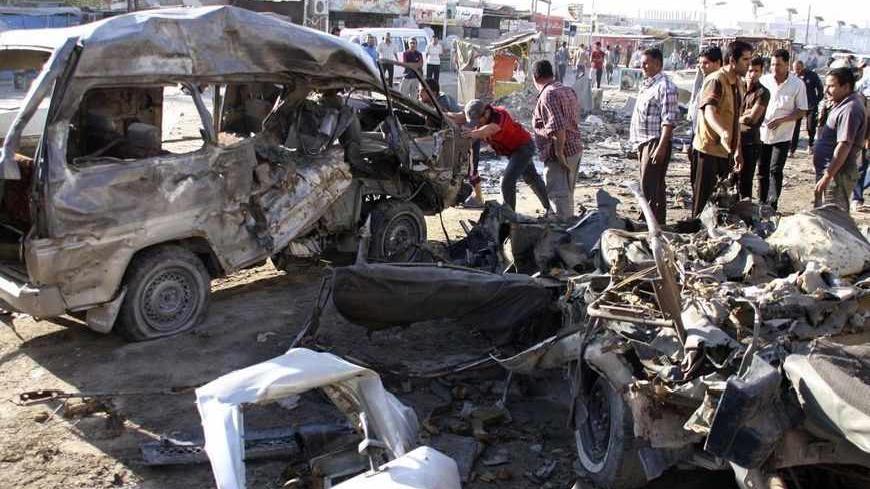 Residents gather at the site of a car bombing in Baghdad's Husseiniya district, April 25, 2013. At least eight people were killed and 23 wounded when a car bomb exploded in eastern Baghdad, police and medical sources said. - REUTERS/Wissm al-Okili

Tension has reached a very dangerous level in Iraq, with increasing violence open for escalation and strong polarization along sectarian lines.

What is happening, and which is expected to increase, is the trading of accusations between the government of Prime Minister Nouri al-Maliki and the demonstrators of a new Sunni uprising pursuing sectarian policies; the issue at stake is one of power sharing and political participation that has always been omnipresent.

The Kurdish constituency is still playing the role of balancer, torn between competing internal and external interests despite its increasing grudges against the central government and the recurrent political clashes between Baghdad and Erbil. Such clashes are taking place over the same power-sharing and political prerogatives with a further clash over what is sovereign and what is not. The former, of course, must lie in the hands of the central government.

Part of this legal debate is an issue of another dimension, of clashing identities, Arabness versus Kurdishness, organized peacefully but not successfully, via the constitutional relations and division of power between the national state and the autonomous Kurdistan Regional Government.

Yet as expected, and as we have mentioned many times, the increasing polarization in Syria along sectarian lines of Sunni versus Shiite has added to the problem. Shiites are supporting the Alawite-based regime because of religious affinities and because of their mutual fear and suspicion of Sunnis. There is an increasing radicalism in the opposing communities and a strong mobilization along Sunni versus Shiite lines. An overlapping and mutually reinforcing axis of conflict is also the Iranian-Arab fight over Syria.

Both are conducting offensives in Iraq to support and empower their friends. The fire in Syria is also sending its heat waves into Iraq. Nevertheless, Iraq is a very receptive environment to such polarization because it has been organized since its creation along a conflict-prone formula, consociational democracy, or the democracy of communities sharing power. It is a dangerous formula in times of raising sectarianism. This is a  formula that showed its vulnerabilities in Lebanon, a country organized since its creation along these lines.

The state organizational structure as well as geopolitical and sectarian contexts are facilitating the importation of the Syrian conflict with its external and internal dimensions into Iraq; all this is creating the conditions for a renewed conflict, dangerous and complex, to explode in Iraq. If Iraq is not shielded rapidly and properly, it will definitely slip into the Syrian quagmire.

Ambassador Nassif Hitti is a senior Arab League official, and former head of the Arab League Mission in Paris and permanent observer at UNESCO, and a member of the Al-Monitor board of directors. The views he presents here are his alone and do not necessarily reflect the views of these organizations.