Nassif Hitti writes that Lebanon cannot distance itself from the Syria war. 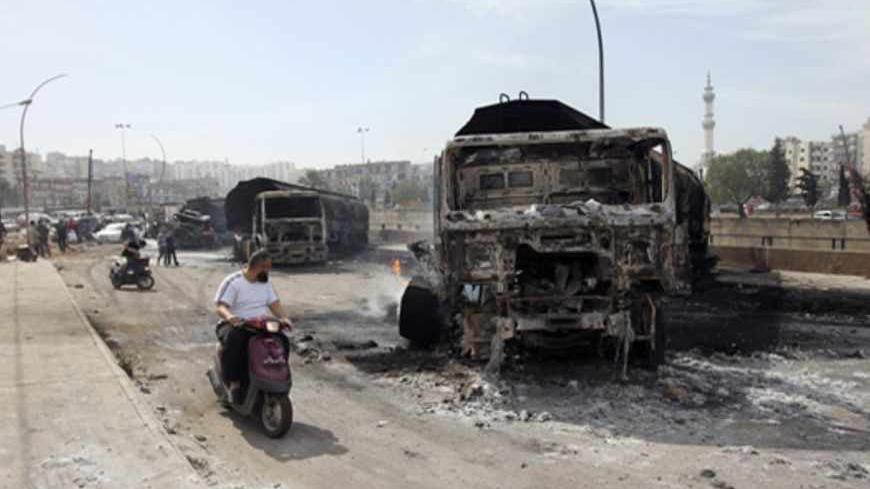 Lebanese policemen from the Security General unit march during a manoeuvre in a joint anti-terrorist exercise off the coast of Hamat in northern Lebanon, April 18, 2013. - REUTERS/Jamal Saidi

The village of Al-Kassir in Syria is becoming a symbol of the emerging Lebanese war. The proximity of Al-Kassir to the Lebanese borders and its geographic importance — located on the axis extending from Damascus to the Syrian littoral — adds a strategic component to this new offshore Lebanese proxy war.

What was once a timid, but not so discreet, backing of allies in Syria — be they the regime or the opposition — is becoming an open war.

Indeed, the clashes on and across the borders are becoming a recurrent phenomena. Regardless of the name or pretext given to the Lebanese incursion into Syria's war by each party, it has important sectarian as well as strategic meanings.

The weight of each varies from one actor to the other as well as the implications that go beyond the party's involvement. What is fought indirectly today between Hezbollah and the Salafists, who are mobilizing to join the jihad in "the land of Islam,” is a war over the future configuration of power in Lebanon.

This is a war that will be greatly shaped by the outcome of the different Syrian wars, and a reversed game. In the past, Syria always intervened in Lebanon for different reasons, as a balancer or as a security subcontractor on behalf of others, whereby its interests at one point of time coincided with those of others in imposing stability and containing or ending an internal war.

But at the end of the day, Syria came to install itself in the role of a hegemon, whereas Lebanon became a key card in the hands of Damascus to strengthen its geopolitical status and advance its interests in the game of power in the region.

The danger in this reversed role is the following: While the Lebanese state officially, but unsuccessfully, maintained a policy of distancing itself from the Syrian crisis, the fire is coming close to home now.

The fear of the unknown, by the key actors in Lebanon, concerns their future status in a new balance of power that is yet to emerge in the country. For some it is power they had and want to maintain, for others it is the power they want to have, which is fueling this new war. Yet, the danger resides in the fact that fire could reach Lebanon via unwanted or unplanned incidents between the highly mobilized constituencies of the two interventionist forces.  Such a scenario will add to an already dangerous sectarian and security situation.

Once dust settles entirely in Syria, and we are still very far from that day, regardless of the wishful thinking of the warring parties and their Lebanese allies, a new configuration of power will have to emerge in Lebanon.

The shape of which will be greatly influenced by the outcome of the Syrian crisis but not in its entirety. Indeed, one of the lessons of the Lebanon sectarian structure mainly in a moment of raising sectarianism is that no party could marginalize on its own or by the force of its external allies, its enemy. The wise policy for all would have been to refrain from intervening in the Syria crisis, regardless of their political affinities and concerns, and work together and with other forces in Lebanon to create a solid national safety net to invest in future stability and to build a protective shield from the coming Syrian storms.

This looks like a dream while Lebanon is slipping slowly but surely into the Syrian quagmire and everybody is rightly afraid of the potential nightmare.

Ambassador Nassif Hitti is a Senior Arab League official, and former head of the Arab League Mission in Paris and permanent observer at UNESCO, and a member of the Al-Monitor board of directors. The views he presents here are his alone and do not necessarily reflect the views of these organizations.