Hamas seems to be seriously planning to kidnap another Israeli soldier or settler after the success of the Gilad Shalit prisoner exchange, writes Adnan Abu Amer. 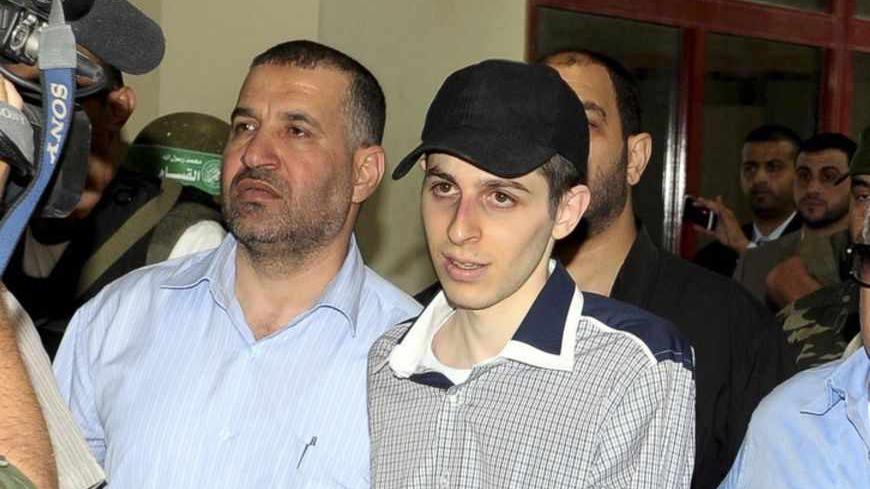 Hamas mediator Ahmed Al-Jaabari (L) escorts Israeli soldier Gilad Shalit on the Egyptian side of the Rafah border crossing in this Oct. 18, 2011 file photo. Israel killed Jaabari, the military commander of the Islamist group Hamas, in a missile strike on the Gaza Strip on Nov. 14, 2012 and launched air raids across the enclave. - REUTERS/Middle East News Agency (MENA)/Khalid Farid/File

On April 17 every year, Palestinians commemorate Prisoners’ Day.  But what was unusual this year were statements by Hamas leaders claiming that the only means to release Palestinian prisoners was by forcing Israel to exchange prisoners. That was said by the head of Hamas’s political bureau, Khaled Meshaal.

Prime Minister Ismail Haniyeh in Gaza made a speech that untied the hands of the Al-Qassam Brigades to resolve the prisoners’ issue and end their tragedy and suffering. He praised the successful kidnapping of Israeli soldier Gilad Shalit and holding him for five years.

"The imprisonment of Shalit by the Izz al-Din Al-Qassam Brigades, and the completion of the [prisoner] swap deal in exchange for his release, is evidence that this file is one of the open files in our central conflict with the occupation. The occupation will not enjoy security and stability as long as our prisoners remain in their prisons, being tortured in the ugliest of ways," he said.

The Vice-President of the Legislative Council, Ahmed Bahar, advised the armed factions to “set in motion their options” to liberate Palestinian prisoners from Israeli jails by all means necessary. The Prisoners’ Minister Atallah Abu al-Sabah stressed the necessity to activate the resistance option in the West Bank and the Gaza Strip because it is the most effective way to release the prisoners.

When Israel agreed to conclude a prisoner exchange deal with Hamas, it opened the latter’s appetite to repeat the experience by kidnapping more Israeli soldiers or settlers.

Hamas is considering carrying out such an operation on the outskirts of Gaza, where Israeli military patrols are present around the clock south, east, and north of the Strip. The Mourabitoun, which are the Hamas fighters in that area, can see the Israeli soldiers with the naked eye, as they revealed to this author. In the West Bank, they also see them face-to-face in the streets and at the checkpoints, prompting the Shin Bet to announce more than once that they have arrested Hamas cells planning kidnapping operations.

However, “special” military circles within Hamas recognize that several factors may hinder such operations. The most important factor is the geographies of the West Bank and Gaza Strip. The geography makes it hard to kidnap or ambush Israeli soldiers, although since Hamas was founded in 1987, the movement has kidnapped more than 20 Israeli soldiers and settlers, but not all of them reached the stage of carrying out an exchange deal for the reasons given above.

Israel has announced that in 2012, 400 Israeli soldiers reported being subject to a kidnapping attempt. Shin Bet investigations revealed that 11 of those were true and were thwarted by Israeli intelligence.

So it is interesting that in the first three months of 2013, Hamas conducted 24 kidnapping attempts, suggesting the presence of strong incentives for such operations by the movement.

To counter these attempts, three Israeli army teams composed of nine battalions and 1,800 troops started making plans to thwart possible kidnapping attempts, in light of increasing threats. This put the Israeli army in a state of alert, and it subsequently appointed an unprecedented number of soldiers to prepare for potential kidnapping operations.

The Israeli army also stepped up security operations around its senior leaders. The Chiefs of Staff ordered Israeli officers to take precautions against kidnapping. For example, they told their officers to avoid wearing military uniforms showing their rank or where they live so that they do not get identified and kidnapped.

Hamas held Shalit for five years and is well aware that Israel follows Hamas’s movements and spies on its conversations. Shalit underwent a thorough investigation by the Shin Bet to identify any security gaps that can be exploited in future kidnapping operations.

The most important obstacle that might hinder a Hamas kidnapping is the low number of West Bank and Gaza locations where such an operation can take place. Moreover, holding a soldier for several days may be very dangerous because it gives time for Israeli security agencies to thoroughly search the West Bank and Gaza.

So Hamas’s military leadership instructed its elements tasked with kidnapping operations to stay away from the places where the Israeli army routinely conducts search operations as much as possible. The Hamas kidnappers should rather prepare for kidnapping operations by staking out the areas where strangers renting apartments is common and draws no attention.

Moreover, communicating by telephone or other technology is a vulnerability that the Israelis can exploit. Israeli intelligence intercepts thousands of Palestinian phone calls around the clock. So Hamas is trying to set up its own communications network  in the Gaza Strip on which the Israelis cannot spy.

Another obstacle hindering a kidnapping operation by Hamas is the security coordination between the Palestinian Authority’s security agencies and their Israeli counterparts. According to Hamas, there were instances when the Shin Bet failed to identify the location of a kidnapped Israeli soldier but the PA found that soldier and handed him over to Israel without a price.

It is no longer a secret that Hamas is seriously trying to capture Israeli soldiers and hold them hostage to exchange them for Palestinian detainees. That was revealed by meetings I had with former prisoners accused of planning such operations. Israel claimed they were collecting information on its soldiers’ movements.

A “Field Manual for Kidnapping”

Hamas has even distributed an 18-page “Field Manual for Kidnapping” to its Qassam Brigades members. The manual explains in detail how kidnapping operations are conducted. It recommends that the kidnappers learn Hebrew and speak it fluently. It also recommends targeting a soldier with a weak physique, conducting the operation when it is raining, using pistols with silencers, and immediately replacing the vehicle that was used for kidnapping.

Hamas is trying to take advantage of Operation Shattered Illusion, during which Shalit was kidnapped on June 25, 2006. Hamas considers that operation to have been a qualitative military and security transformation, both in how it was implemented and in its serious consequences.

Hamas fighters were able to capture Shalit and take him out of the battlefield alive, which paved the way for scenarios that range from low to high cost and low to high danger. Hamas fighters were able to conduct the operation in the heart of an Israeli military outpost in southern Gaza. They killed and wounded a number of soldiers and calmly took Shalit to their base, something that unnerved Israeli generals.

Hamas estimates that holding another hostage in an area no more than 360 square kilometers [about 140 square miles] is extremely difficult if not impossible, because the Israeli army has more effective surveillance, eavesdropping, and reconnaissance tools. Yet it was unable to locate Shalit.

Moreover, the success of any future kidnapping of a soldier or settler depends primarily on how Hamas manages the so-called “war of nerves” by intentionally withholding information and irritating the Israeli army’s leadership, which would be thirsty for any piece of information no matter how minor.

At a time when Israel has gotten used to being the one that issues threats and warnings, the initiative is now on the Palestinians’ side. They are the ones who now issue warnings and grant the Israeli army a few days before “closing” the case of the kidnapped soldier or settler!

Hamas realizes that the success of an exchange deal depends on Hamas’s ability to reach the heart of Israel and bring the quarrel among Israeli military and security leaders out in the open, whereby generals and ministers would trade accusations of negligence. Hamas also realizes that the success of the Shalit exchange deal puts pressure on the Israeli government to repeat the experience, even if Israel extracts a heavy price from the Palestinians before agreeing to the exchange.