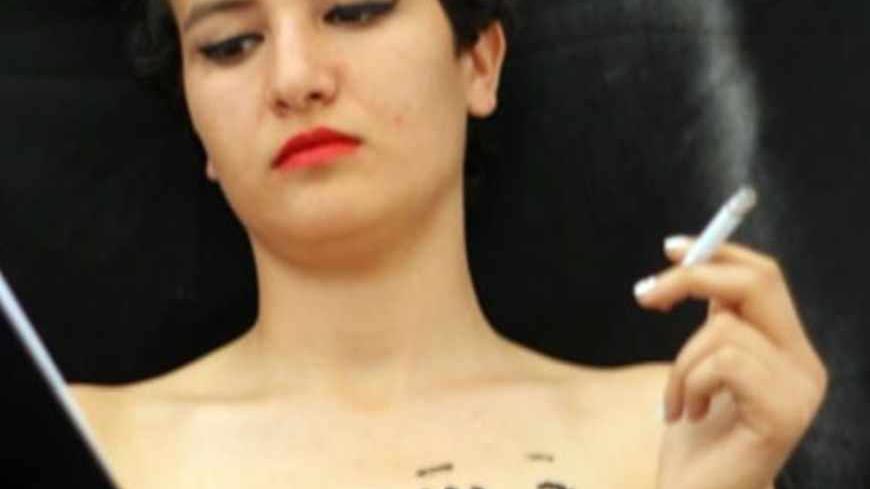 19 year old Tunisian FEMEN supporter Amina posing topless in a picture on her Facebook. "My body belongs to me, and is not the source of anyone’s honor" is written across her chest. - FEMEN
Yasmine Nagaty
@@yasmine_nagaty
April 1, 2013

In the aftermath of the wave of uprisings that took place across the Arab world in 2011, women were placed under the spotlight of post-revolution political discussion. During the Egyptian and Tunisian revolutions, the contribution of Arab women to the toppling of the Ben Ali and Mubarak regimes was both undeniable and admired.

Yet when Islamist regimes seized power in both countries, such recognition was withheld and replaced with advocacy for a range of oppressive policies for women. Indeed, various statements by Islamist figures have blamed women for both sexual harassment and domestic violence. As a result, a number of reactionary movements have sprung up for the purpose of rejecting Islamist agenda on women.

One of these movements, Uprising of Women in the Arab World, became particularly well known. The movement is a social media campaign dedicated to creating a platform from which Arab women can tell their stories and protest issues like domestic violence, sexual harassment and sexism. Movements offline also sprung up, particularly in light of the various attacks made on female protesters, which led to women taking to the streets to protest their governments’ neglect of their rights. Despite these initiatives, little change was evoked as both the Tunisian Ennahda Party and the Egyptian Muslim Brotherhood continued to propagate and encourage blaming women for the problems they face.

This process raises questions about the future of feminism and the advocacy of women’s rights in the Arab world. While feminist organizations have existed in the region for decades, it is the adoption of a more radical framework that has sparked controversy in the two years following the Arab revolutions.  One example of this is the alliance between some Arab feminists and a Ukrainian group called Femen. The first to publicly adopt the doctrines of Femen was Egyptian Aliaa el-Mahdi, who posted a nude photo of herself online that sparked public outrage and debates over the acceptability of public nudity.

Two weeks ago, a young Tunisian woman named Amina ignited a similar storm after she posted photographs of herself topless in which captions like “my body is my own and not the source of anyone’s honor” and “f--- your morals” are written on her chest. Predictably, just as with Aliaa, a number of Islamist statements have called for the stoning to death of Amina. Equally predictable, a number of people have showed staunch support for Amina by taking similar photographs and disseminating various petitions calling for her freedom.

Both Femen’s ideas about nudity as the only path to freedom as well as Islamist ideas about forced veiling are equally oppressive. First, it is crucial that we place the adoption of Femen ideas by some Arab feminists within the context of Islamist rule and reactionary movements to Islamism. For the past few months, atheism has appeared in various discussions in Egypt. It began with an article that was published by Daily News Egypt headlined A Generation of Atheists and continues with many newly proclaimed Egyptian atheists. What is intriguing about this supposed rise in atheism in Egypt is not some newly found adoption of atheist logic or belief, but rather an apparent representation of a stubborn response to Islamist policies. Indeed, in A Generation of Atheists, the author expresses her concern that the current generation of young Egyptians are being pushed away from Islam because the Islamist government is “letting those who defame and deform our religion speak in mosques and on television.”

After the article was published there was a general murmur of agreement from liberal circles, discernible especially on social media. It seemed as though being an atheist was above all the spiteful answer to get back at Islamist power. I use the term “spiteful” not out of contempt for atheist ideology, but because of the logic out of which converts have adopted it. Atheism is supposedly a rejection of belief in God. Here, it has become the rejection of a group of men’s forceful and oppressive interpretation of Islamic principles. The flawed nature of this logic is putting Egyptian liberals in a complicated situation. By admittedly adopting rejection of religion as a response to Islamists, they are operating under the assumption that Islam is correctly interpreted, and indeed owned by Islamist parties. Thus, they are playing into the very discourse they intended to oppose.

Consider the implications of such behavior for feminism and women’s rights. Just as the answer to Islamist policies among liberals became atheism for many, so too did nudity emerge as a response to various statements and practices intended to compel women to cover up against their will. Again, by critiquing Islamist rhetoric for oppressively sexualizing the female body and yet stipulating that liberty for women can only be attained through nudity, advocates of Femen’s ideology are guilty of adopting the opposite extreme of the very discourse that continues to oppress women. In the words of Sara Salem in her article about Femen, nudity then becomes just as much of a uniform as forced veiling.

At the end of the day, the parallels between Islamist power and atheism as well as Islamist power and nude protesting go a long way in explaining the dynamics that have perpetuated the behavior of individuals like Aliaa el-Mahdi or Amina. As the public outrage over Amina goes on, it becomes evident that the real danger now is that the oppressive discourse that has long hindered women’s rights, and taken away their rights to their own bodies, is being self-perpetuated by the interaction of its two opposing extremes.

Yasmine Nagaty holds a degree in political science from the American University in Cairo, and is currently employed at Misr El-Kheir, an Egyptian NGO.