Can Nude Feminism Succeed in Turkey?

In Turkey, the nude protesters of women's rights group FEMEN face a larger obstacle than male supremacy: They don't quite understand the real issues that strain Turkish politics and society. 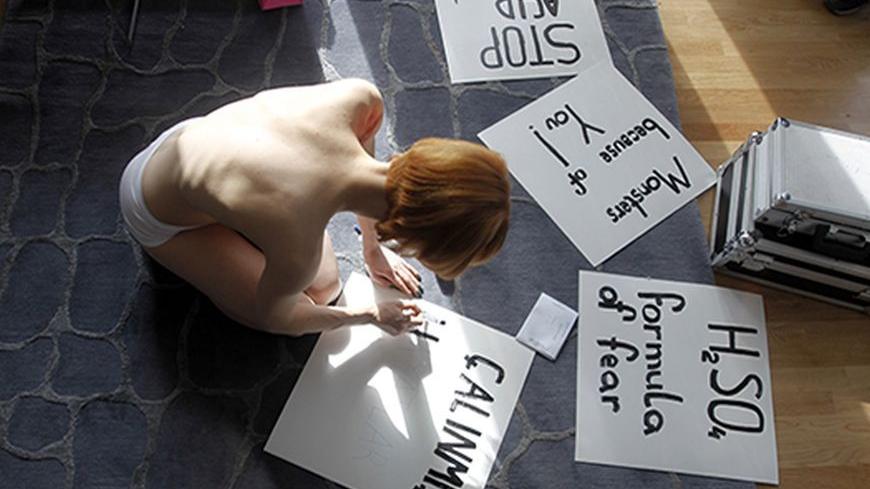 An activist of the women's rights group Femen prepares for a protest against domestic violence in Istanbul, March 8, 2012.

Originally founded in Ukraine in 2008 and headquartered in Paris, the international women’s rights group FEMEN has now opened a branch in Turkey. In order to publicize their opposition to what they call men’s “economic, cultural and ideological oppression” of women, FEMEN activists stage nude protests in public and paint slogans on their naked bodies. Furthermore, given its atheism, the group has attacked religious symbols and institutions.

Although FEMEN-Turkey is likely to face immense pressure from Turkish authorities because of the country’s restrictive laws on public morality, popular indifference is likely to be a bigger problem. It is fair to speculate that most women in Turkey will shy away from FEMEN because of its nudity. Conversely, most Turkish men, who have much to learn about women’s rights, are likely to miss the point and will focus on the sight of semi-naked women.

Turkey, of course, is no stranger to FEMEN activism. In 2008, the group held its first demonstration outside the Turkish Embassy in Kiev. The group’s activists, dressed as “sexy nurses,” protested the deluge of Turkish men who visit Ukraine for “sex tourism.” The following year, concerned that the deluge of thousands of male football fans would worsen conditions for women working in Ukraine’s sex industry, the group adopted its signature method of naked protest against the 2012 European football championship in Ukraine.

Since then, FEMEN has held many protests in different European cities, including one in Istanbul in March 2012 on International Women’s Day. The group also posted a short video in solidarity with the Gezi protests that rocked Turkey last summer.

But that pro-Gezi video showed how, much like Turkish men missing the point about FEMEN, the group may be missing the point about Turkey. In their solidarity video, the activists droned on about “resisting Islamization.” However, as many Al-Monitor contributors have pointed out, the Gezi protests were more about resisting the Justice and Development Party (AKP) government’s authoritarianism and crass negligence of social justice and the environment, not “Islamization.” A group that gained prominence during last summer’s protests is called “anti-capitalist Muslims,” hardly an outfit that would resist Islamization.

Can FEMEN succeed in Turkey? After all, this is a country where a high-ranking member of the ruling party can get a female TV host fired for her décolletage and where a lingerie shop is forced to shutter its storefront when the prime minister visits the shopping mall where that store is located.

And the problem is not just about politicians. In Turkey, where an overwhelming majority of the people define themselves as Muslim and many women wear the Islamic headscarf, public nudity will alienate potential allies. As Al-Monitor contributor Yasmine Nagaty pointed out last spring, FEMEN’s use of nudity as a uniform, much like the forced veiling of women in many Muslim countries, defeats the argument for liberating women.

FEMEN has other weak spots. The group is faced with accusations that it plays into the hands of the patriarchy by deliberately fielding attractive activists and that it uses some of its rallies to publicize for its corporate sponsors. That FEMEN’s online store sells "boobprints" on canvas, for which purchasers can specify their favorite activist-model, also contradicts the opposition against the objectification of women.

But rather than acting like the proverbial bull in a china shop, FEMEN might tailor its message to fit the medium. There are signs of that: FEMEN paired the announcement of the opening of its Turkish branch with an endorsement of the protests going on at the Middle East Technical University (METU) in Ankara. Even though the announcement contained pictures of a naked Turkish activist, the thrust of the message was solidarity with the protests against the AKP-controlled municipality in Ankara and its partial destruction of the METU forest to build a highway.

If FEMEN picks its fights carefully and sticks to methods that are more in tune with the Turkish context (that means clamping down on the atheism and wearing some clothes), the group might have a chance in its uphill battle against female oppression in Turkey.

Barın Kayaoğlu is finishing his doctorate in history at the University of Virginia. He was recently a Smith Richardson Foundation fellow in International Security Studies at Yale University. Follow him at www.barinkayaoglu.com. On Twitter: @barinkayaoglu and Facebook: BarınKayaoğlu.com