The recent sectarian violence and rhetoric in Egypt is allowing President Mohammed Morsi to distract the public from the country’s real problems, writes Yasmine Nagaty. 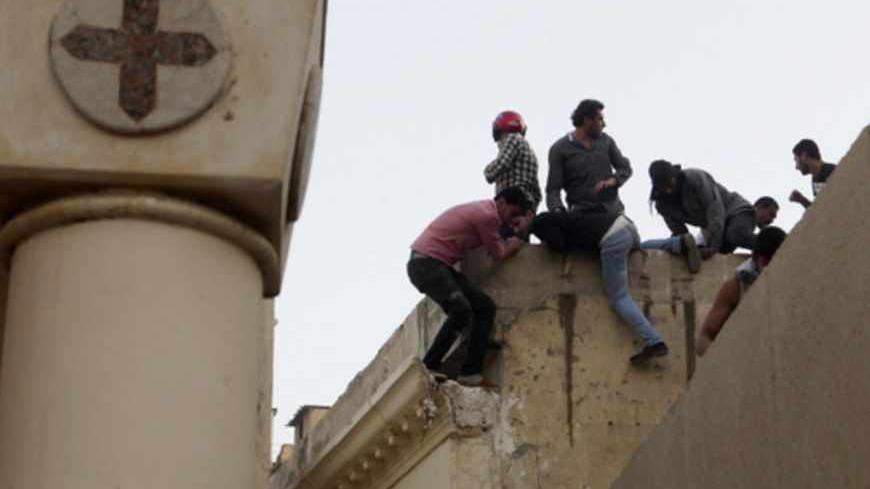 Coptic Christians run on the roof of the main cathedral in Cairo as police fire tear gas during clashes with Muslims standing outside the cathedral, April 7, 2013. - REUTERS/Asmaa Waguih
Yasmine Nagaty
@@yasmine_nagaty
April 17, 2013

On Saturday, March 8, the clashes that started in Cairo were reignited in the town of Al-Khosous in Qaloubia, where four Copts and one Muslim were reportedly killed and eight others were injured. The following day, two more were killed and at least 90 injured when unknown assailants attacked mourners outside the cathedral in Abbaseya. Tension mounted further still on Monday, March 9, as a video labeled “Proud Muslim Men Rape Coptic Women” went viral on various social-media outlets. The video displayed an attack made on a woman in an Egyptian market in which the attacker yelled "Allahu Akbar" (God is great) as he attempted to pin her to the ground. The video was in fact first posted in 2009 and has now been removed from YouTube.

What remains of that morbid week is a public state of anxiety over the prospects of sectarian conflict in Egypt, especially in light of the Islamist seizure of power under President Mohammed Morsi. For years, as sectarianism has continued to be one of the most sensitive and avoided topics of political discussion, the inequality with which Copts are treated by the state has become evident. Today, as various Islamist figures make “anti-Copt” statements and after the presidency blamed Coptic youth for the cathedral clashes, it is clear that the Egyptian state has failed to learn its lessons from the 2011 uprising.

Indeed, one of the events that ignited the anger of Egyptians was the bombing of the Two Saints Church during the 2010 New Year’s Eve mass. Two years later, in the aftermath of the Jan. 25 revolution, we still know nothing about who was responsible for the church bombing which killed 23 people. However, there is more certainty than ever regarding the state’s role in perpetuating sectarian tension between Egyptian Muslims and Copts.

Such a role is part of a strategy of governance that is no different in Morsi’s Egypt from that of deposed president Hosni Mubarak’s. A few weeks ago, in my article on women’s rights under the Morsi regime, I attempted to trace the Egyptian state’s neglect of women’s rights to the stipulations of neoliberal philosophy, whereby the state has taken on the role of a mere market player rather than a purveyor of public goods. For this reason, I argued, the Egyptian state continues to ignore its responsibilities to protect various groups of its citizens that are unable to compete in the market.

The matter has become highly complicated, however, as the failures of such a system become undeniable in the form of skyrocketing prices and attendant soaring poverty rates. In fact, a staggering 86% of Egyptian households are now unable to meet their needs, and things are expected to worsen as Morsi’s regime embarks on an IMF loan and will be required to end subsidies on various basic goods.

These conditions were indeed true of both the Mubarak and Morsi regimes. Now, however, more demands are made on Morsi given that the January revolution was instigated precisely against such conditions. Since both the Mubarak and the Morsi regimes were persistent in their employment of economic policies that marginalized their citizens, it became necessary for Mubarak and now Morsi to engage their citizens in distractive clashes in order to avoid the very mobilization against socioeconomic injustice that occurred on Jan. 25, 2011.

In reality, in terms of the dynamics of sectarian strife in Egypt, there is no real difference between Mubarak’s reign and Morsi’s. In his article "Tracing Sectarian Violence in Egypt," Mohammed Kheir provides a historic timeline of sectarian tensions in Egypt since Sadat. Kheir, among others, however, makes the argument that “the Brotherhood continues to oppose the modern state as an institution that equates between citizens.” While such arguments may explain the rhetoric used by some Islamist figures in defense of the current Islamist government’s policies, they fall short of explaining the dynamics through which the recent clashes have taken place.

There are numerous factors affecting the issue of sectarianism in Egypt, whose scope goes beyond the space of a single article. However, when we speak of sectarianism, how useful is it to limit our analysis to the behavior of extremist factions on both sides? How do we even define sectarianism? In the case of Egypt, at least, the role of the state in perpetuating sectarian strife is undeniable. To speak of sectarianism without speaking of the state and the extent to which its policies are marginalizing its citizens, whether Muslim or Coptic, puts us at risk of abandoning the very causes for which Egyptian youth lost their lives during the revolution, and which are essential to the welfare of Egyptians.

Yasmine Nagaty holds a degree in political science from the American University in Cairo and is currently employed at Misr El-Kheir, an Egyptian NGO.