What Really Happened Between Netanyahu and Obama

From confidential, well-placed sources, Ben Caspit discloses the arguments in Prime Minister Benjamin Netanyahu's chambers hidden behind friendly gestures in public during the US president’s visit. 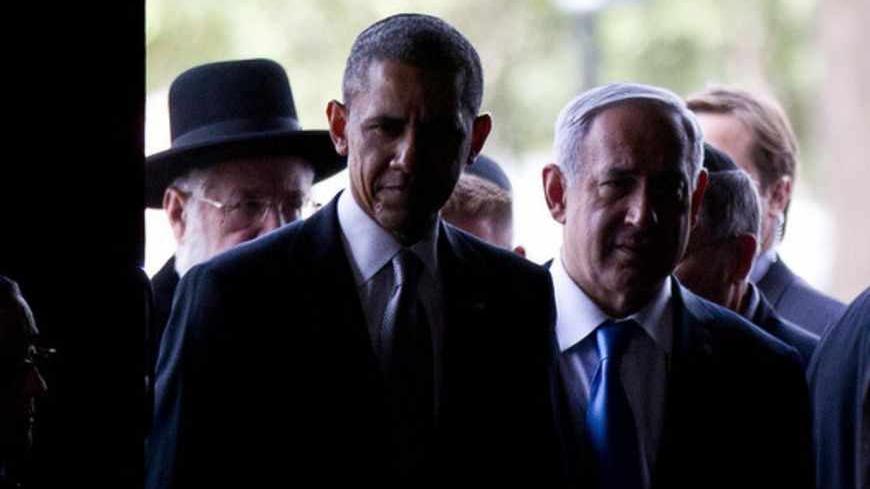 Now that all the confetti has scattered and the euphoria has died down, we can start looking into what really happened during US President Barack Obama’s visit to Jerusalem March 20.

Outwardly, the visit seemed very cordial and warm. There was every indication that there had been a significant improvement in the frigid relationship between the US president and Israeli Prime Minister Benjamin Netanyahu. The few dramas that occurred took place behind closed doors.

According to confidential sources close to the meeting, the two leaders’ relationship certainly improved, but mainly because they had no choice. They are stuck with each other for the next few years. Still, most of the debates and disagreements remain exactly as they were.

Let’s start with the Iranian issue. According to reliable Israeli sources that are well informed, Obama reiterated his commitment that he would not accept a nuclear Iran, nor would he be satisfied with containing a nuclear Iran. He would pay any price to prevent the ayatollahs from obtaining nuclear weapons, even if it meant using force. The following conversation is paraphrased.

“You have to trust me on that,” he told Netanyahu.

“Give me a date,” Netanyahu asked. "A target date, some deadline after which you will not agree to any more Iranian maneuvering. After all,” Netanyahu explained, “they’re only trying to win more time. They’re pulling you along by the nose. The longer it takes, the less the chances of stopping them on time.”

Obama did not agree to give him a time frame. “At this stage, we have no intention of releasing statements, talking about dates, or issuing an ultimatum,” he told Netanyahu, and he tried to calm him down. “As president of the United States, I hereby declare to you that I will not let them reach nuclear capabilities. There’s still time. We are fully aware of the progress they are making. You and I see eye to eye when it comes to reading the situation and the intelligence reports. We have the capacity to prevent them from reaching their target, when we decide to do that.”

Netanyahu doesn’t believe Obama. On principle, Netanyahu has a hard time trusting anyone. He is a suspicious person by nature, verging on the paranoid. He has no real allies or close friends. When it comes to Iran, all of his suspicions are exacerbated and his paranoia goes into overdrive. Why should he believe Obama?

It is worth noting that plenty of people in Israel do believe Obama. For example, President Shimon Peres believes Obama. According to reliable Israeli security sources, many of the top military brass and many leaders of the country’s other security forces also believe him. They hear similar things from the American generals with whom they are in regular contact.

The Americans tell them, “We have the ability to put an end to the Iranian nuclear program in just a few weeks, and at minimal cost. If you tried to do that, you’d be gambling with your national security, your air force and your future. When we do it, it will be much simpler and easier. We have everything ready. You know the plans.”

Though Israel’s security forces trust the Americans, the real decision-makers in Israel are the country’s political class. We have already noted how they lack trust. Netanyahu gave Obama North Korea as an example.

“Look at how they’re sticking their tongues out at you,” the prime minister said. “The fact that you are restraining yourselves and letting them go wild and do whatever they want reverberates all the way to Tehran. What are the Iranians supposed to take away from all that?”

Obama wasn’t frightened by this. He explained to Netanyahu that there is a difference between North Korea and Iran.

“We have a problem taking action in North Korea,” said Obama. “Our allies, the South Koreans, don’t want us to act. North Korea has thousands of artillery pieces lined up along the border, and these can destroy Seoul the moment we act. They prefer other solutions.” Obama continued, “As for Iran, there is nothing like that holding us back. Once we reach the conclusion that it is time to act, we will take action.”

Did Obama manage to calm Netanyahu down? No. Netanyahu is not a person who actually calms down. Now, in the spring, as always, they’re taking a head count. Who in the cabinet and government is for an Israeli attack on Iran, and who is against it?

At the same time, there is the Palestinian issue. Obama has been active in this as well, and Secretary of State John Kerry has been even more so.

The Americans keep a very close watch on Israeli politics. They know that Netanyahu is vulnerable. Behind closed doors they say that Bibi (Netanyahu) lost the elections, that he suffered a major blow and that he is weak. He is no longer "King Bibi,” who did whatever he wanted with them during his previous term. He can no longer tell them that if he makes progress with the Palestinians, his government will collapse. The Americans know how to present him with an alternative coalition, with Labor party leader Shelly Yachimovich and her party instead of HaBayit HaYehudi chairperson Naftali Bennett, if he is only willing to make progress on the diplomatic front.

But Netanyahu does not want to make progress on the diplomatic front. He makes promises. He made promises. He even said that he was ready to transfer additional territory from Area C to the Palestinians as a special goodwill gesture, but when it comes to making real progress, he prefers to focus on the Iranian issue.

In fact, that’s the bottom line. On the Iranian issue, Netanyahu said that there is no time, and that we have to act now, while the Americans told him to calm down. They said that there is time, and that they will only act when the conditions are ripe, and they have no other options on that. As for the Palestinians, it was the exact opposite. The Americans say that there is no time, that we have to act now to rescue Palestinian President Abu Mazen, support the moderates and establish a strategic alliance between Israel, the Palestinians, the Turks and the Jordanians. Such an alliance might also include a post-Assad Syria and have an impact on Egypt. In contrast, Netanyahu says, “Calm down. There’s still time. We’re not ready yet. I will act. I want peace, but only when the conditions are ripe.”

What will ripen first? We’ll have to wait and see.