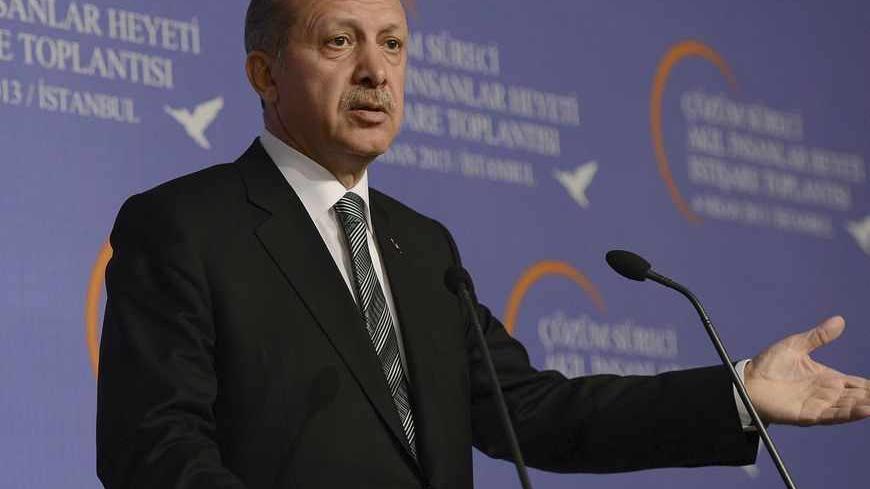 The peace process between the Turkish government and the Kurdish movement that has been in progress since last December is not the first attempt of the AKP government to find a political solution to the PKK issue. The first experiment was in 2009 that ended in what is best described as a fiasco. The title of the process, which began in July 2009 and fizzled out in October, was changed three times by the Erdogan government, which was sensitive to the reaction of the AKP constituency and Turkish public in general: It started out as ”Kurdish opening.” When faced with resentment of  the word Kurd, that was discarded and replaced by ‘’democratic” and the process was thus renamed "democratic opening."

By the time the process was abandoned in October because of a strong reaction of the Turkish public to victory festivities and demonstrations by tens of thousands of Kurds to the return of several PKK guerillas unarmed but in uniform to Turkey through the Habur gate, the official border crossing between the Kurdistan regional government and Turkey, the name of the process had become ‘’National Unity Project.” The most salient reason for the ”opening fiasco” of the AKP government was its lack of preparation intellectually and politically and its inexperience.

Another aspect which was ignored was the reality that the peace process was actually a “negotiation process.” Not only professionalism was lacking in contacts with various units of the Kurdish movement that was a part of the conflict, another similarly important dimension was totally overlooked. These were the ‘’parallel talks” — the talks focusing on persuasion of segments of the public who could fear and be intimidated by radical changes that peace would bring and resort to reactive social and political actions that could impede the process. That would be talking with the Kurds, while simultaneously carrying out talks with the Turks.

The segments that could fear the process were nationalist Turks, whether religious or secular, who constitute the majority of the population.

And now the AKP government, which apparently learned the lessons of its past mistakes, has launched a “parallel talks” experiment, naturally compatible with its own style and mind-set, as of April 4. This time the project is called “Wise People Delegation.”

In summary, it goes like this: The delegation publicly named on April 3 is made up of 62 people (50 men and 12 women), personally selected by Prime Minister Recep Tayyip Erdogan or approved by him from those proposed by others. Among them are movie stars, singers, writers, journalists, lawyers, unionists and businessmen. The vast majority of them are widely known, highly reputable people.

Among them are Turkey’s famous actress Hulya Kocyigit and actor Kadir Inanir. Orhan Gencebay, a legendary Turkish popular music singer who was identified as the founder of Arabesque music in Turkey in the 1970s, is also part of the delegation. Leftist intellectuals Murat Belge and Baskin Oran are two other outstanding delegation members. A controversial name could be Hasan Karakaya, the editor-in-chief of the radical Islamist daily Yeni Akit, who until recently was showing peace proponents as targets.

On April 4, Erdogan met with these 62 people in his office at the Ottoman Dolmabahce Palace on the shores of the Bosporus and thus officially launched the work of the “’Wise People Delegation.’’

In a TV interview with journalists on March 29, Erdogan had said the function of the “Wise People Delegation” will be to develop “public perceptions” of the process. That was his most substantive clarification on the subject until that moment.

It will not be unjust to say that the organization of the delegation reflects a centralized and bureaucratic spirit. They are equally divided to seven geographic regions of Turkey. Only the Aegean has eight members. Each regional sub-delegation has a chairperson, a vice chair and secretary elected from among themselves. First we were told that they will serve one month, but now two months is being mentioned. They will visit towns, meet with people, organize meetings with civil society and explain the benefits of the peace process to ease public concerns. In the end, they will prepare a report to be submitted to the prime minister. All their expenses will be paid for by the state.

Before the delegation started its work, Erdogan had said that they will be working together with the Prime Ministry’s Undersecretariat for Public Order and Security, but this was eventually put aside.

Who are these Wise People? The vast majority of them are figures who are known to be pro-government, some with Islamic identities or those who would think of criticizing the government as the very last resort.

But their common denominator is to believe in and advocate for a peace solution to the Kurdish question.

Nevertheless, the delegation with former AKP deputies and parliamentary candidates is expected to promote the peace process formulated and implemented by Erdogan.

But to defend peace and a solution should not mean blindly supporting the entirety of the AKP policy with all its mistakes and flaws.

On the other hand, it would also be unfair to assume that some of the important and reputable intellectual members of the delegation would surrender their virtues and independence to the political will of Erdogan. But, still, it would be excessive optimism to claim that the delegation as it stands has the capacity to persuade public segments as the Kemalist nationalist Republic People's Party [CHP] or Turkish nationalist, the Nationalist Action Party [MHP].

The reality is that as they are today, these Wise People can only contribute to persuade the religious conservative nationalists in the AKP’s constituency base. This will prevent AKP from losing votes.

If in the coming fall there is to be a referendum for constitutional amendments in line with Erdogan's political career plans alongside some arrangements needed for a solution to the Kurdish issue, AKP has to preserve its base that appears to be around 50% of voters.

CHP and MHP have already launched propaganda to denigrate the Wise People Delegation. The one who has really taken the lead in this campaign is Devlet Bahceli, the chairman of MHP, who has been opposing talks with the PKK and a political solution on nationalist grounds. When talking to his party’s parliamentary group on March 9, Bahceli said Erdogan is manipulating these 62 people, that delegation members were AKP and PKK sympathizers, that they are acting as PKK spokespersons and that they were aiming at dividing the Turkish nation. He also accused some movie stars and musicians in the delegation of being ignorant and actually spoke in terms of making them targets.

On the other hand, pro-government daily Star’s banner headline on April 14 was all rosy: “Public embraced the Wise People.”

The sub-headline read: “Wise People who have gone out to seven regions of Turkey were embraced by the people. The halls where the Wise People met the public were full. They were overwhelmed by invitations to other gatherings. Negative reactions were much below expectations.”

This ”Alla Turca” Wise People experiment that is very peculiar to the new regime of Turkey, because of the way they were selected, organized and tasked, could well constitute a model to solve potential conflicts in the Middle East.