Israel Should Embrace Immigrants From Africa

Instead of rejecting African immigrants, Israel should integrate them, becoming a multicultural society such as in Europe, writes Shlomi Eldar. 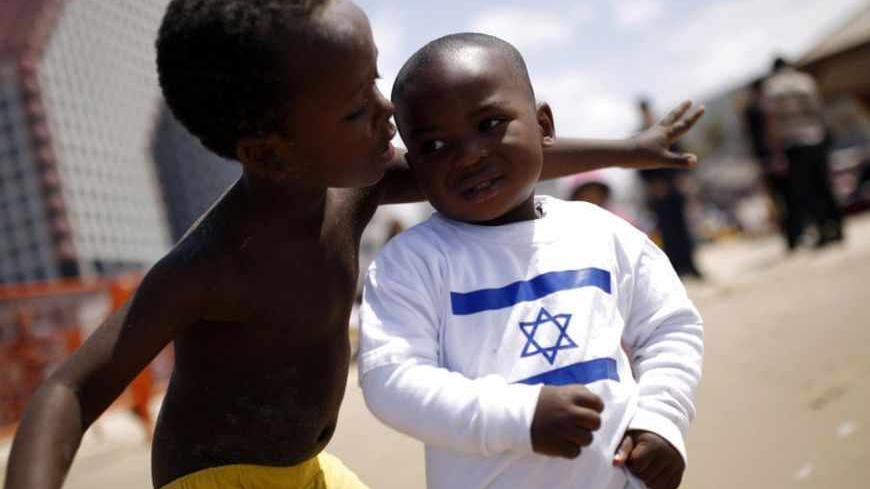 Children of migrant workers play on a beach in Tel Aviv, on Israel's Independence Day, marking the 65th anniversary of the creation of the state, April 16, 2013. - REUTERS/Amir Cohen

London. They say “the sun never sets on the British Empire.” I have just returned from a visit to this capital and witnessed multiculturalism in all its glory. London may have a reputation as being an elitist city, but it is packed with people from every continent and of every color and religion. Unlike immigrants seeking work in Israel or sneaking across the border in search of safe harbor and a livelihood, London’s immigrants roam its streets with a sense of security and peace of mind. They feel no need to constantly glance every which way as they walk, trying to avoid an unsolicited encounter with the immigration police. Meanwhile, an efficient public transportation system takes masses of people to wherever they might want to go. The bars are full, and the restaurants, which once had a well-earned reputation for their uninspired offerings, now feature an eclectic and exciting range of flavors, representing every imaginable style of cooking from every country and every culture. Fusion actually thrives here. In other words, it really isn’t that hard to find a decent restaurant in London any more.

The very people who arrived in the kingdom seeking to earn a decent livelihood have transformed London into a truly cosmopolitan city, like Paris, Berlin, Geneva or New York. In Europe, as in Israel, there is considerable concern about the flood of immigrants from underdeveloped countries, as more of them find their way to the wealthy nations of the West. The difference lies in how those countries deal with this phenomenon.

The British government, like others in Europe, realized that it was impossible to put a complete halt to such immigration, but that it was possible, and even necessary, to use common sense in tackling the problem. Instead of pushing new immigrants to the fringes of society and fostering a sense of alienation and anger, it was decided to integrate them and to embrace the best that they have to offer. Extensive, pragmatic programs were developed to absorb the immigrant flows from the Middle East and Africa. Of course, this demanded close cooperation among the ministries of welfare, housing, and education and the police, but it seems to be working, at least for now.

It is true that British Prime Minister David Cameron has bemoaned the fact that Great Britain has not been completely successful in integrating its immigrant communities. On the other hand, that he confessed to this indicates that there is a genuine desire to do so and that this desire is the result of goodwill.

By the way, from an Israeli perspective, this same immigration phenomenon is perceived as “an attempt by foreigners to take over Europe,” which, in all its naiveté, fails to understand the dangerous implications. It is also possible that many Europeans would prefer to see their countries “refugee free.” Nevertheless, most of them also realize that globalization comes at a cost. They have come to understand that instead of waging war against this phenomenon, they should simply accept it and move on. The result of this is that refugees who go to the United Kingdom feel as if they share a British identity. It is doubtful whether they would feel the same way if the immigration authorities hunted them down and the welfare institutions ignored them.

Refugees, people seeking work and undocumented immigrants from Eritrea and Sudan have also rushed to Israel, making their way through breaches in the security fence along the Egyptian border. As in Europe, many of them were not fleeing a harsh dictatorship or the horrors of hunger and war. Some simply came in search of a better life. The problem is that for most of them, the dream has become a nightmare.

These people trekked a long way across the desert through Egypt, experiencing chilling brutality at the hands of Bedouin gangs in the Sinai who regard them as little more than easy targets for extortion and blackmail. Some were captured by human traffickers and forced to pay a steep ransom of some $3,000 or more per person before being released. Their captors did not spare any means to prove to them how serious their threats were. The loss of a finger, an ear or some other limb was just one of the “means” that these African refugees faced. The data banks of Doctors for Human Rights in Israel contain hundreds of chilling eyewitness testimonies verifying such accounts. They talk of the sale of the limbs of refugees captured and tortured as they made their way toward the Israeli border and of hundreds of women who were raped but somehow still managed to muster the strength to continue northward, hoping that their suffering would end once they reached Israel. When they got here though, they discovered that there was no end to their travails in sight.

Israel, itself a nation of refugees, showed no tolerance toward their suffering. Xenophobia and hatred of the other, much like hatred of the Arabs, has reached terrifying levels here. What is most horrifying, however, is that no attempt is made to hide it.

On Oct. 31, 2009, one day before the government discussed whether it would deport the children of foreign workers, former Interior Minister Eli Yishai of the Orthodox party Shas was interviewed on Channel 2 News. He said, “If hundreds of thousands of foreign workers come here now, they would bring all sorts of diseases with them: jaundice, measles, tuberculosis, AIDS, drugs.” At the same time, he described those immigrants who crossed the border seeking work as “an existential threat” and “a danger to the Zionist enterprise.” Now, imagine what would have happened if a British minister were to say such a thing, and about Jews at that. Yet, during its election campaign, Shas actually prided itself on mistreating these foreign workers.

When the terminology in use includes such expressions as “existential threat,” it is no wonder that the proposed solution is all-out war, using every available means, including imprisonment and the deportation of children who grew up as Israelis in every imaginable way, who attended Israeli schools and whose first language (and in most cases, whose only language) is Hebrew. They and their parents end up being shipped back to their countries of origin, despite the real threat to their lives that this entails.

I am not saying that Israel should open its border to all and sundry. This is, after all, a tiny country. It is incapable of absorbing hundreds of thousands of immigrants fleeing their countries of origin in Africa. The fact is that the fence built along the border with Egypt is also an important means of stopping terrorists from infiltrating from the Sinai and of creating a physical boundary line, just as in every normal country. What I am saying is that we need to create a comprehensive, inter-governmental plan about what to do with those immigrants who are already here. By this, I mean those people who have already been living here for several years, who have children, who were born here and who have nowhere else to go. We have to absorb them and help them adapt. We have to embrace them, just like they did in Britain.

What happens in Israel instead is that we push these immigrants into a corner. We mock them and even demonstrate against them. Were it not for the many aid agencies established in Israel by wonderful people, the situation would be much worse.

I can understand the fear felt by the people of southern Tel Aviv, where tens of thousands of foreign workers are concentrated, who suffer regularly from thefts and harassment by the homeless who seem to have crowded on their neighborhoods, though it should also be pointed out that several surveys have already proved that crime levels among refugees and illegal immigrants are no higher than they are among the general population. I simply think that deportation is not the way to handle this problem.

I believe the exact opposite. I am convinced that Israel must support these immigrants. It must provide them with aid and assistance, at least in the beginning. That way, instead of feeling alienated and resentful, they will come to identify with Israel and feel a commitment to their new home.

In the end, we only stand to benefit from this. Just like they do in London.