In recent months, Sudanese refugees have been trying to enter Israel by slipping across the tense border with Lebanon. 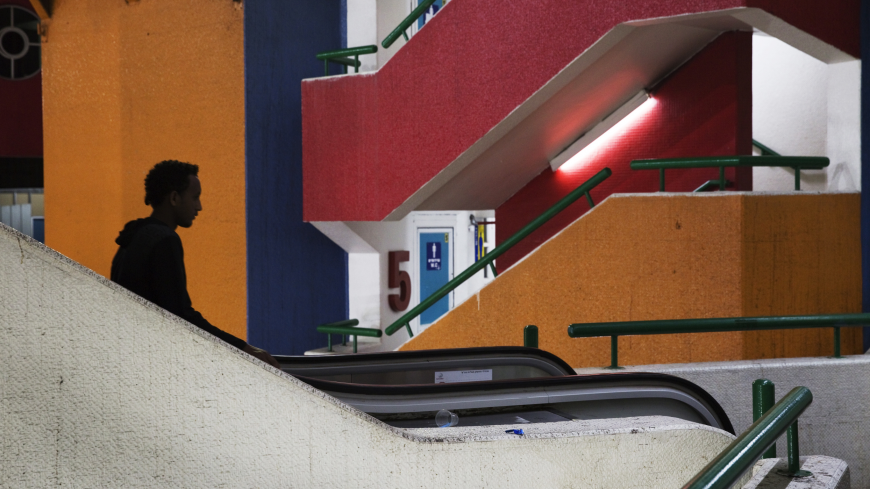 An African migrant rides an escalator at the Central Bus station in Tel Aviv, Oct. 21, 2014. In 2020, Sudanese in search of work have been attempting to cross into Israel from Lebanon. - REUTERS/Finbarr O'Reilly

“I entered [Israel] on Tuesday, along the border with Lebanon. … I was helped by someone named Abu Abdo. He is a smuggler, who told me where I could get in and took me halfway there. I walked the rest of the way on my own. When I got to the fence, I crossed it alone. I continued walking for another half hour, before someone saw me, brought me water, and called the army. … They called the Nahariya Police Department, which interrogated me at the immigration division. Then, at court, they gave me papers. … Once I was released, I walked to my brother in Tel Aviv. I traveled from Sudan to Syria, and from there, I went to Lebanon. I wasn’t tortured. I wasn’t hurt. I’m healthy.”

This story was told by Muhammad Abshar Abakar, a 25-year-old Sudanese refugee who was caught in January after crossing Israel’s northern border. Two weeks later, he was brought before the custody court in the Givon holding facility. Abakar said he worked as a dishwasher at a restaurant in Beirut. He said that after the eatery was shut down, he decided to sneak into Israel and find work at a restaurant in the north.

Abakar may be the first refugee who has been able to get across one of the most heavily guarded borders in the Middle East (the border between Israel and Lebanon) and arrive safely in Israel. Others followed in his wake, apparently because he eventually found work in Tel Aviv after spending nearly three months in custody. Rumors about him spread like wildfire, and dozens of others tried to get across. The way things look now, the flow across the northern border is likely to intensify.

On May 3, a group of five Sudanese attempted to cross the border. They were caught and sent back to Lebanon. On May 17, an IDF force following a routine near Har Dov saw a Syrian attempting to enter the country. He was shot and taken to a hospital in Israel in critical condition. On May 19, the IDF caught two suspects of Sudanese origin who crossed from Lebanon into Israeli territory. Just one day earlier, IDF troops located several holes in the border fence. The suspicion is that these were made by people attempting to enter the country. According to a Channel 2 report, 13 Sudanese migrant workers attempted to cross the Lebanese border into Israel near the agricultural village of Shetula on May 30. Three were caught by the Israel Defense Forces (IDF), while 10 were caught by the Lebanese army.

“As the economic situation in Lebanon deteriorates, Israel is becoming more attractive to guest workers in Lebanon,” Col. Orna Mizrahi (ret.) told Al-Monitor. The former deputy national security adviser for foreign policy is now a senior researcher at Israel’s Institute for National Security Studies. “Today in Lebanon, over 50% of the population is said to be living below the poverty line. It is only natural that when there is such a severe economic crisis, one of the populations to suffer most is the immigrant community. They have less job security, especially in Lebanon, where they already suffer from serious discrimination.”

Mizrahi said this is one of the tightest borders in the region, especially given the growing tension between the IDF and Hezbollah. Both sides wander about armed to the teeth, and everyone is suspicious and nervous. Nevertheless, Sudanese immigrants are still willing to gamble on it. “The situation in Lebanon is so desperate that they are willing to take a huge risk in the hope that they might find a better future in Israel,” she said. “It may also be the fact that there is a large Sudanese community in Tel Aviv, which works and makes a living here. This encourages other Sudanese to take such a big risk.”

Nevertheless, Mizrahi suspects that at least some of the attempts to cross the border over the last few months were orchestrated by Hezbollah to test Israel’s alertness and to collect intelligence. “We know that Hezbollah pretty much controls the sector. It is not impossible that they are actually following the people trying to get into the country. It allows these refugees to get to the border, and it uses them, whether they know it or not, to learn about the IDF’s activities and gauge its vigilance.”

Israel wants to stop the phenomenon. Politicians are calling for a halt to the trend once and for all. Former Justice Minister Ayelet Shaked wrote on Twitter on May 31, “13 infiltrators from Sudan tried to enter Israel from the border with Lebanon over the weekend. … It has to stop now, before a few individuals become thousands.”

The current practice in Israel is to return people who crossed the border back to Lebanon as soon as they are caught and to take them past the fence. Nevertheless, human rights organizations are critical of this practice. According to Shira Abbo, a representative of the nongovernmental organization Hotline for Refugees and Migrants, the fact that Israel is returning these Sudanese refugees to Lebanon without first investigating their cases and interrogating them is illegal. “Israel is a signatory to various international conventions, which obligate it to allow anyone seeking refuge to present his or her request in an organized manner the moment they reach Israel’s border,” she told Al-Monitor. “The current procedure, which is known as a ‘hot [on the spot] return,’ was only permitted by the Supreme Court on condition that refugees are first interrogated by authorities specifically authorized to do that, and this is not happening. We are certainly considering our next steps.”

The Hotline for Refugees and Migrants represented Abakar in court and was able to get him released from custody after almost three months in prison. “We provide assistance to all people who cross the border illegally and to migrant workers, but most of the people requesting sanctuary in Israel are war refugees from Sudan,” Abbo said. “In principle, Israel approves requests for sanctuary from Sudanese citizens, so if these Sudanese citizens reach our borders, we want to see a serious assessment of their requests for sanctuary.”

In contrast, Attorney Yonatan Yakobovich, the director of the Israeli Immigration Policy Center, told Al-Monitor that the Sudanese are not refugees per se but migrant laborers who consider Israel to be a preferable destination because of changes taking place in Europe. “Until now, Israel was less appealing to Sudanese immigrants for the simple reason that there were other, more attractive alternatives, particularly in the European states. But now Europe is starting to take a tougher stance, and some of the nations there are already sending Sudanese immigrants back to Sudan. There are also steps being taken directly with the governments of African states to prevent the arrival of these immigrants in advance. On the other hand, Israeli courts have all but eviscerated any tools the country had to deal with immigration, including the Financial Security Law, which was recently overturned. That is why these immigrants believe that it is in their interest to try and come here.’’

He added, “This is why we are seeing an increase in attempts to infiltrate the country by way of Lebanon. I expect this phenomenon to continue.” Yakobovich said he believes attempts to enter the country will intensify over time. “We are already seeing an almost exact repeat of what happened at the start of the waves of illegal immigrants from Egypt, who arrived here in 2010. If Israel doesn’t wake up, hundreds of migrant workers from Sudan will try to get into the country in the very near future.”