Obama Makes His Case for Israel To Resume Peace Efforts 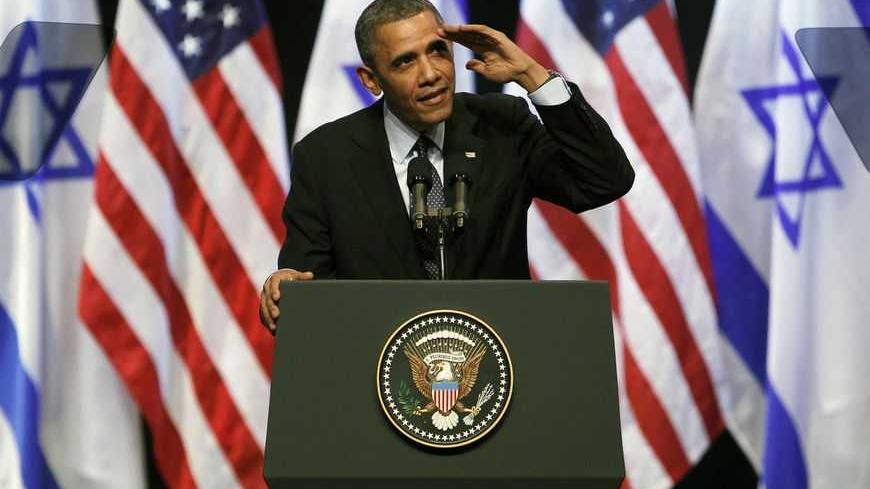 President Barack Obama gestures during his address to Israeli students at the International Convention Center in Jerusalem, March 21, 2013. - REUTERS/Baz Ratner

For their far gentler criticism of Israel’s occupation policy than that expressed by President Barack Obama, the former heads of the Shin Bet security service who starred in the [Oscar nominated] documentary The Gatekeepers were castigated by Israel’s ambassador to the United States, Michael Oren. If, instead of making his historic speech before young Israelis at the Jerusalem Conference Center, Obama had chosen to speak at the Knesset about the settlements damaging peace prospects and the forgiving attitude adopted by the Israeli establishment toward settlers who violate the law, one can easily imagine the volume of jeers he would have encountered from the Likud and the HaBayit HaYehudi party.

Minister Limor Livnat would have certainly been hard-pressed to conceal her expression of loathing at the sound of the words, “neither occupation nor expulsion are the answer.” And just imagine how the Minister of Housing, the settler Uri Ariel, would have reacted to the words of an “American gentile” in the Israeli Knesset, that “given the demographics west of the Jordan River (Obama did no use the terms Judea and Samaria, A.E.), the only way for Israel to endure and thrive as a Jewish and democratic state is through the realization of an independent and viable Palestine.”

One may assume that Prime Minister Benjamin Netanyahu was not pleased to hear Obama quote former Prime Minister Ariel Sharon, who said before the pullout from Gaza that one cannot maintain a Jewish and democratic state and at the same time rule over the entire Land of Israel. Netanyahu undoubtedly did not appreciate Obama’s decision to quote left-wing author David Grossman, who lost his son in the second Lebanon war and said that “a peace of no choice … must be approached with the same determination as one approaches a war of no choice.”

Had he spoken in the Knesset, Obama could not have afforded an appeal to the Israeli public above the heads of his hosts, the Knesset members, urging the citizens to demand that their political leaders take the necessary risks involved in making peace and telling them that their “voices must be louder than the extremists who would drown them out”. Some of the representatives of those extremists would have been sitting in the audience, at the table reserved for government ministers.

It's obvious why Obama decided to skip the Knesset and speak directly to the Israeli public from the stage of the Jerusalem conference center. Never, yes, never have more candid and courageous words of rebuke over the policy of occupation been uttered than those sounded by the leader of the free world. Obama’s message was said in a loud and clear voice: You, the Israelis, are not alone. You can always count on us, the United States. There is also a Palestinian people, living under occupation, and it, too, deserves to live freely in its land. You, the Israelis, are not alone. You are surrounded by a turbulent Arab and Muslim region which is closely following your attitude toward the Arab and Muslim population which has been crushed for years by Jewish occupation. Gone are the days of autocratic Arab leaders who dictate policies to the public. You, the Israelis, are not alone, you are surrounded by an international community that is backing away from you because of the occupation and the settlements.

I do not remember when a foreign leader (or any Israeli politician) spoke in such a way to the Israeli people about the notion of “justice” and suggested that they put themselves in the shoes of the Palestinians. For most Israelis, the Palestinians are, at best, people devoid of a face and identity. In the worst case, they are enemies devoid of rights. In his speech Obama brought into Israeli living rooms the experience of his meeting with young Palestinians. His message was that the freedom of those young people is not just a matter of justice, but also an Israeli interest. In order for you, the Israelis, to feel happy and secure, your Palestinian neighbors must feel free and happy.

Obama managed to deliver his sharp words in kid gloves, rife with thoughtful Jewish and Zionist symbols.  To the sound of the cheering crowd of students, he recounted the tradition of the Passover meal he had brought with him to the White House so that his daughters could experience the reading of the Haggadah and learn how the Jews had been slaves for hundreds of years, wandered in the desert and withstood persecution.

A veiled reference to occupation by a foreign nation? Perhaps.

Nor did Obama forget to say that the next day he would pay tribute to the history of Zionism at the tomb of Benjamin Zeev Herzl, the visionary who foresaw the founding of a Jewish state, and would also visit Yad Vashem, which eternalizes the memory of the greatest disaster to befall the Jewish people and humanity in its entirety. Obama will also pay his respects at the grave of Yitzhak Rabin, who, as he said in his speech, “understood that Israel’s victories in war had to be followed by battles for peace.”