With the death of the “Mother of Martyrs,” Mariam Farhat, who sent her sons to commit suicide attacks in Israel, Shlomi Eldar hopes that her legacy of bloodshed will not survive her. 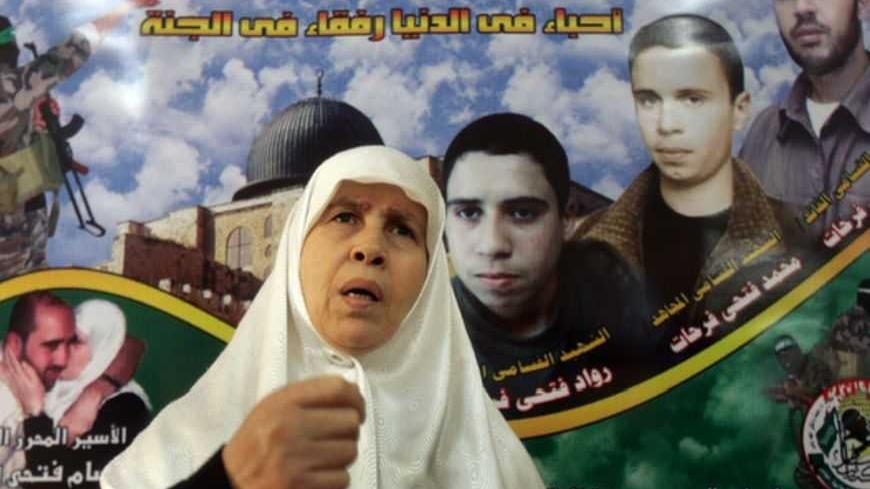 Mariam Farhat, then a Hamas candidate for the Palestinian parliament, is seen in front of a large mural of her three dead sons inside her house in Gaza Dec. 8, 2005. - REUTERS/Suhaib Salem

Mariam Farhat, “Mother of the Palestinian Martyrs,” who passed away on Sunday, March 17, received the “glorious” title of the "Palestinian al-Khansa” in tribute to the sixth-century poet Bint Amr from the pre-Islamic period. The original al-Khansa, who converted to Islam during the life of the Prophet Muhammad, lost her four sons at the Battle of Qadissiyyah, in which the Muslim armies defeated the Persians. According to tradition, she ordered her sons to go to battle, and when she was later informed that they had fallen, responded with the words, “Praise to the lord, who has honored me with their deaths.”

Al-Khansa is considered the first “Mother of Martyrs.” She became a symbol in the narrative of Hamas, and almost certainly in that which Mariam Farhat, “the second Mother of Martyrs,” adopted for herself. Farhat, who was also called Umm Nidal, turned herself into a “terrorist factory.” She encouraged her sons to launch terrorist attacks against Israel, and like the ancient poet after whom she modeled her life, she expressed her gratitude at the news of their deaths.

I have never heard another mother express joy that her son was killed.

Mariam Farhat first gained public exposure in March 2002, during the Second Intifada, when she appeared in a chilling video. In it, she was shown sending her son Muhammad to launch an attack against a Jewish settlement in Gush Katif, in the Gaza Strip. Knowing that the chances of him returning alive were slim, she kissed him and encouraged him to sacrifice his life. There is not the slightest hint of sadness in her face. All we can see is the smile of a woman imbued with the terrifying belief that death is a small price to pay on the path to achieving the ultimate goal. Armed with a rifle, grenades and the knowledge that he was fulfilling his mother’s mission, Muhammad infiltrated the settlement of Atzmona and killed five young students attending the military preparatory academy there before he was gunned down by the IDF.

Farhat’s second son, Nidal, was probably the most famous of her children, and certainly the most deadly, as he was considered the inventor of the Qassam rocket. For years, Nidal worked on the idea of a Palestinian-made rocket that could be fired at Israeli settlements from mobile rocket launchers in the Gaza Strip. It seemed like a fantasy at the time, but Muhammad Deif, head of the Izz ad-Din al-Qassam Brigades (Hamas’s military wing), brought Nidal together with his deputy Adnan al-Ghoul so that they could develop the first Palestinian rocket. The rest is history.

What suffering, destruction and death that rocket developed by Farhat’s son bring on the people of southern Israel! But the Palestinian people paid an even steeper price. Israeli reprisals resulted in thousands of deaths, tens of thousands of injuries and the destruction of infrastructure whose scope and cost cannot even be calculated. That one rocket design brought about the hermetic closure of the Gaza Strip, massive reprisals, military operations and untold misery and hatred.

Nidal was the second of Farhat's sons to be killed, but he didn’t die in battle. He and five of his comrades from Izz ad-Din al-Qassam were killed as they tried to develop an explosive drone. Their prototype exploded in a hangar while being tested.

Farhat lost her third son, Ruwad, in 2005 during a targeted Israel aerial strike. It was then that she gained the title “Mother of Martyrs,” but it wasn’t because she had sacrificed her sons. It was what she said at Ruwad’s funeral.

“I have four sons left,” she intoned with blood-curling equanimity. “I hope that they all become martyrs.”

I saw her twice during my time as a journalist in the Gaza Strip. The first time was after the IDF’s “Days of Repentance” operation, which was intended to stop the rocket fire aimed at Israel’s southern settlements. It was Israel’s response to the very rockets developed by her son Nidal. Some 120 Palestinians were killed in that military operation.

The second time I saw her was during the Palestinian election campaign of 2006. Farhat was given the 22nd slot on the Hamas list of candidates, and later served as a member of Gaza’s parliament.

The scene was unforgettable. I saw a woman in her mid-fifties, full of bluster, wandering among the people of the refugee camps with a semi-automatic rifle in her hands and a white veil covering her head. Crowds of admirers tagged along, clearing a way for her wherever she went, as if she were some living saint.

Of course, some people will say that everything I write here is tainted with condescension. They will claim that I fail to understand the pain suffered by this Palestinian patriot who dreamed of ending the occupation and in order to achieve that goal, was prepared to sacrifice what she held most dear, her children. Others did not understand her reasoning and the encouragement she offered her children to embark on suicide terror attacks. They claimed, in private conversations, that she had lost her mind. When I asked all of them how a mother could say, ''I wish that my other children would also perish in jihad," some would answer that there are also Israeli mothers who lost their children in this country’s wars, and in their grief and loss, found some comfort in the notion that their children died for a noble cause.

As befitting the legacy she left behind, the “Mother of Martyrs” received a full military funeral, attended by thousands of people. The eulogy was delivered by Hamas Prime Minister Ismail Haniyeh himself, who said, “You were a symbol of jihad.”

There is an old belief that the gates of heaven are opened by the angels of peace. I can only wonder whether those same angels will open the gates to this “Mother of Martyrs” when she asks to rest beside her sons, who arrived in Heaven before her — with her encouragement.

by Haitham EL-TABEI with AFP correspondents in the Middle East | AFP | May 17, 2022
END_OF_DOCUMENT_TOKEN_TO_BE_REPLACED