Cafes and homes in the Gaza Strip have been destroyed by Israeli bombardment, which local Palestinian activists say constitute war crimes. 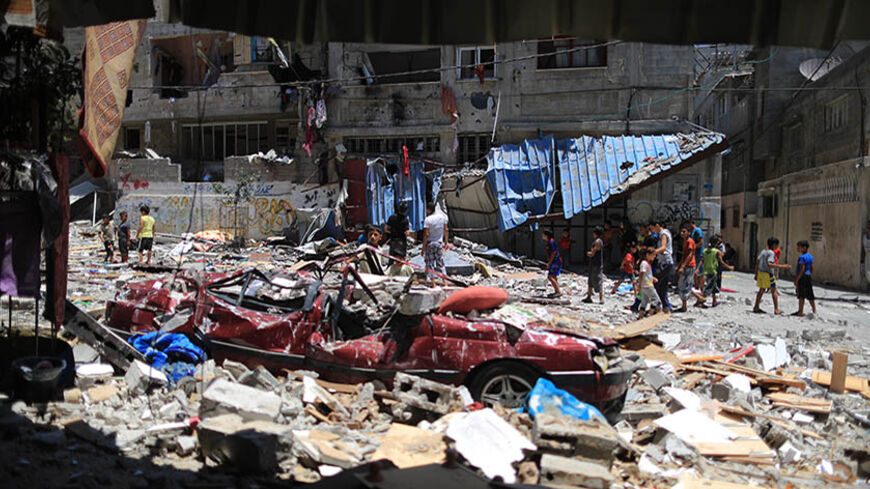 Debris litters the streets after an Israeli airstrike in Gaza, July 10, 2014. - Wissam Nassar

GAZA CITY, Gaza Strip — Ashraf al-Qadra, the spokesman for the Ministry of Health in the Gaza Strip, confirmed to Al-Monitor that the number of martyrs in the Israeli war on Gaza had risen to 110, in addition to more than 800 injured. He added that the martyrs included 23 children, 19 women and six senior citizens.

The Israeli occupation continued to target civilian houses in various areas of Gaza, and the number of homes completely destroyed by the occupation's aircraft reached more than 120. Among these was the home of the Hajj family, located in the refugee camp in Khan Yunis. Eight members of the family died at dawn on July 10, in the strike that destroyed their home.

Mahmoud al-Hajj, 27, a relative of the martyrs, told Al-Monitor, "I heard a terrifying explosion. I never expected that [it had hit] my uncle's home. They are a very normal family, none of the family members are involved in military activity. I ran to the area and found people in a state of hysteria, crying and screaming. I discovered that eight members of my uncle’s family had died under the rubble."

Mahmoud recalled his relatives by name and age, saying, "We found [the body of] my uncle Mahmoud in pieces, and he was 54 years old. His wife Basima, 54, had her legs torn off. She took her final breaths in the hospital. Then there are his sons — Omar, Tariq and Saad — and his daughters — Najlaa, Asmaa and Fatima. They were all in high school, middle school or elementary school. We searched for their limbs and heads, which had been severed by the intensity of the bombing."

He confirmed that the bombing was not preceded by any warning, resulting in all of them dying and dozens of nearby families sustaining injuries. He noted that they had just returned from a visit to their grandfather's house and were preparing to sleep, when the eldest son Yasser went out to visit one of his friends.

"Yasser, in addition to their married daughter who is living in another area, are the only two surviving members of the family. They are now taking tranquilizers and sedatives because of the trauma," he added. He noted that they were all buried on the afternoon of July 10 in a mass funeral.

Qadra clarified to Al-Monitor that the targeting of the Hajj family killed eight people and injured more than 15 others, with injuries ranging from moderate to serious.

About two hours before the killing of the Hajj family, the occupation forces committed another war crime, on the evening of July 9, when occupation aircraft bombed the Waqt al-Marah cafe along the Qarara Beach, located to the west of Khan Yunis in the southern Gaza Strip. Nine youths who were watching the soccer match between the Netherlands and Argentina were martyred.

Among the dead were three brothers who owned the cafeteria, according to their brother Mohammed al-Sawali, 36.

"I heard that the cafeteria had been hit, so I ran there and found that their bodies had been blown far away by the shelling. The cafe is nothing but a few chairs and a TV, and the aircraft bombed it as though it were a military base. It is crazy what is happening," he told Al-Monitor.

He continued, trying to contain his tears, "I found that my brothers Ibrahim and Hamdi had been martyred, and after a day of searching we found the body of my brother Salim."

He noted that anyone who sees the place cannot imagine the size and reason of the crime committed against youth who were watching a soccer game. "The bombing led to the death of nine people, including my brothers, the children of my neighbors and my friends," he added.

Hundreds of audio messages were sent to locals on their mobile phones — particularly residents of northern and southern Gaza — requesting that they leave their homes and head to the city centers.

Abdullah Jumaa, an eyewitness from the city of Rafah in the southern Gaza Strip, told Al-Monitor, "Dozens of families are standing in front of their homes in the Tel al-Sultan region, carrying their belongings. They are unsure of whether or not to leave, yet afraid to return to their homes for fear of them being bombed, after they received audio messages warning them not to stay [in their homes]."

The spokesman for the Interior Ministry in Gaza, Iyad al-Bazm, told Al-Monitor the goal of the audio messages was to terrify citizens, cause panic and weaken the internal front in light of the failure of the occupation.

Lawyer Salah Abdul Ati, the director of the Independent Commission for Human Rights, said that the Israeli aggression against the Gaza Strip constitutes war crimes and massive violations of human rights, which require prosecution and accountability.

"The silence of the international community has encouraged Israel to launch more aggression against the Palestinian people," he told Al-Monitor. He pointed out that when one monitors and documents the current crimes, it becomes undoubtedly clear that Israel is deliberately targeting civilians and causing huge harm to civilians.

Abdul Ati warned that "the inaction of the international community, and its failure to perform its legal and international duties, means the death of more civilians, especially women and children, whom it has become clear comprise the 'bank of targets' for the occupation."

On the other hand, the Izz ad-Din al-Qassam Brigades, the military wing of Hamas, revealed on the afternoon of July 10 a new type of rocket made by its mujahedeen — the Shale 55 missile — which struck for the first time Rehovot and Bat Yam with 10 rockets.

Qassam added, "Furthermore, the brigades revealed on Tuesday [July 8] another new type of rocket, the R160 rocket, which reached for the first time in the history of the conflict with the enemy to occupied Haifa, which lies more than 100 kilometers [62 miles] from Gaza." The Izz ad-Din al-Qassam Brigades indicated that they called this rocket the "R160 rocket" after the martyred commander Abdul Aziz al-Rantisi.

In parallel to the scene of bombings and death within the cities is another scene on the southern border of the Gaza Strip. Hundreds of citizens are gathered at the Rafah land crossing, trying to leave after the Egyptian authorities opened the crossing in an exceptional and limited manner, on the morning of July 10, allowing for the exit of injured persons and Egyptian passport holders.