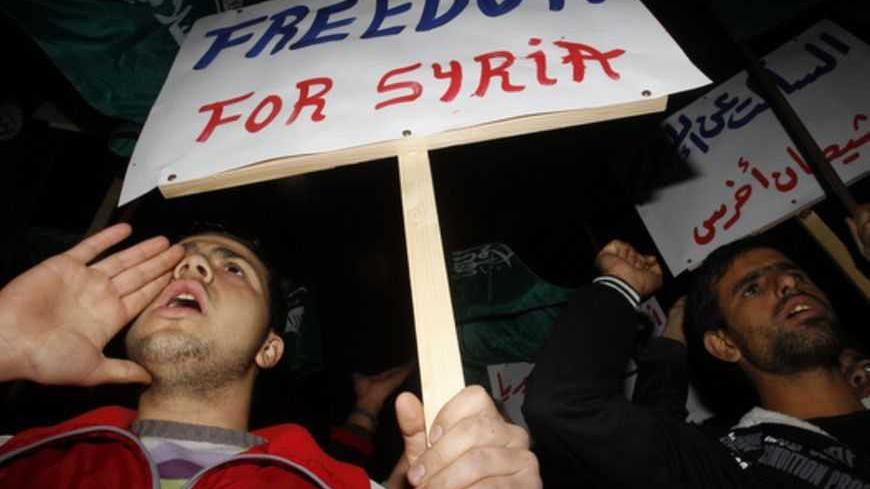 Supporters of Lebanon's Muslim Brotherhood party take part in a rally in the port-city of Sidon, southern Lebanon, against attacks by Syrian President Bashar al-Assad's forces on the Syrian city of Homs Feb. 9, 2012. - REUTERS/Ali Hashisho 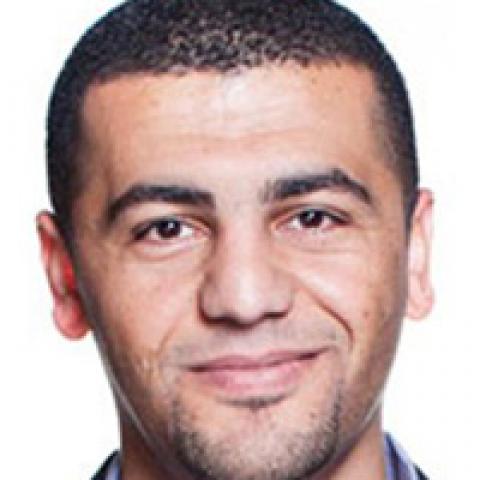 Ghassan Hitto, a naturalized US citizen from Damascus, was selected on Monday, March 18, by members of the opposition Syrian National Coalition to become the interim prime minister. Little known among Syrians, his appointment is by far the clearest indication of the Muslim Brotherhood’s monopoly over the opposition’s political and military bodies. At least nine figures suspended their membership in the National Coalition in protest, including the coalition’s spokesman, Walid Buni, and Vice President Suhair Attasi, who then retracted her suspension a day later.

Hitto is not known to be a member of the Muslim Brotherhood, but he is ideologically close to it. A Syrian close to Hitto told me that he is “100% supported and trusted by the Brotherhood.” His brother is a member who was jailed for many years, his acquaintance said, which is why Hitto fled Syria. The source located Hitto in terms of independence somewhere between Moaz al-Khatib, the coalition’s president who proved to be independent, and the Brotherhood. Hitto is one of very few opposition figures who were involved in groundwork inside Syria after the uprising, distributing aid to people in various areas. He is also well-spoken in both Arabic and English. But his appointment appears to be based on a key credential: his consistent rejection of dialogue with the regime, a policy advocated by the Muslim Brotherhood and its allies Qatar and Turkey.

There had been deep disagreements among the opposition about the formation of an interim government. Khatib had opposed it, saying the government would deepen divisions among forces on the ground. In a letter he sent to the coalition members, he wrote: “If members of the coalition cannot agree on one person to represent them, how can they expect that person to represent all Syrians?” Instead, Khatib said that an executive authority would be a better option for the time being, as countries can grant that authority access to resources and even embassies. The Arab League, in its latest meeting on March 7, asked the coalition to form an executive authority to allow it legally to take Syria’s seat.

Disagreements involving the interim government are particularly worrying because an interim government, unlike previous entities that are supposed to represent the opposition outside the country, has to represent and organize the forces on the ground. Its ability to work with the various forces will hinge on its representativeness and legitimacy. It remains to be seen whether this is possible, and whether its cabinet will be inclusive.

The Brotherhood’s first choice for a prime minister was Osama Kadi, an Islamist based in Canada. Kadi’s appointment was due to be announced in February, but the coalition delayed the government’s formation due to disagreements. Last week, Qatar and Turkey pushed for selecting an interim prime minister. Out of the 63 coalition executives, 45 attended the voting session and 35 voted for Hitto. Before the sham voting process started, Khatib and several other members stormed out of the room in Istanbul, but Turkish officials convinced Khatib to return later and endorse Hitto’s appointment. Qatar reiterated the same promises offered to the Syrian opposition before the formation of the National Coalition, including a seat in the Arab League and increased aid.

According to sources in the Syrian opposition, Qatar asked Mustafa Sabbagh, the coalition’s secretary-general, to ensure the appointment of Hitto. Mustafa Sabbagh, a businessman from Latakia working in Saudi Arabia, was appointed the coalition’s sectary-general in November after he showed up in Doha with 16 people claiming to represent provisional councils across the country. As it turned out, almost all the 16 people were either Sabbagh’s employees in Saudi Arabia or his relatives, some of whom had not visited Syria for decades. Sabbagh and the 16 coalition members met with the Brotherhood and told them to drop Kadi and vote for Hitto. Although the coalition had a secretary-general, there was neither a general secretariat nor any clear function for the post. Shortly after the coalition was formed, Sabbagh tried to assume executive powers — unsuccessfully, due to opposition from several prominent members.

The appointment has been a significant victory for the Brotherhood and its allies, restoring its control over the opposition after a period in which talks of dialogue threatened the group’s vision for regime change in Syria. The Brotherhood, along with Qatar and Turkey, hopes for a complete downfall of the regime to steer the transitional period and ensure its enduring control over the state. As US academic and Syria expert Joshua Landis pointed out, the move was partly aimed to kill Khatib’s initiative of dialogue with the regime.

“To this end, Hitto’s first words were that he would not negotiate with the Assad regime,” Landis wrote on his website, Syria Comment. This argument is further bolstered by the fact that neither Saudi Arabia, Jordan nor other key (Western) players were informed of Hitto’s appointment, according to a senior diplomat familiar with the process.

Misrepresentation has been one of the Brotherhood’s tactics to ensure supremacy within the opposition’s political and military bodies. Suhair Attasi said she suspended her membership in the Coalition because of the “non-institutional mindset that allows a group of people to control the Coalition considering the rest as subjects”. It is unclear what changed for her to retract her suspension.

But apart from concerns about the independence of the National Coalition, the episode bodes ill for the country’s future. The idea of an interim government has been debated within the opposition for three months, but the discussions had been limited to who would lead the government, rather than discussing the project and its mechanism for governing rebel-held areas. Also, forming a government is a card the opposition cannot afford to lose; such a government should have been kept as a means after the collapse the regime to bring the various forces together under a representative body. If the interim government fails in terms of credibility, and by design scuttles the slim prospects for a negotiated political solution, this will serve only to prolong the bloodshed.

Hassan Hassan is an editorial writer for The National newspaper in Abu Dhabi, UAE. He also writes for The Guardian, Foreign Policy and Carnegie Endowment, among other publications. Follow him on Twitter: @hhassan140.