Writing from South Sinai, Mohannad Sabry meets with local business owners in the tourism sector who tell him that they keep hoping for political stability to bring back tourists — but that Egyptian President Mohammed Morsi's inability to govern has been making a bad situation worse. 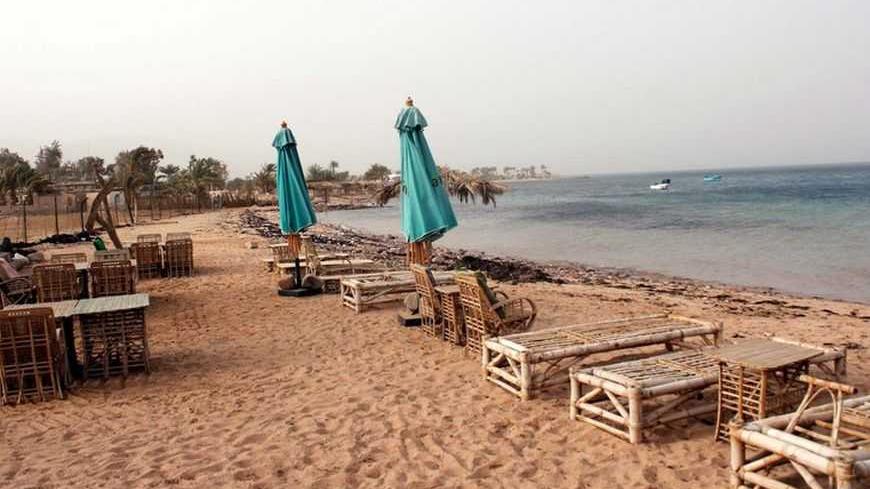 The private beach of Habiba Beach Camp in the Red Sea town Nuweiba, one of South Sinai's most popular destinations, has been empty for the past six months. Photo taken March 26, 2013. - Mohannad Sabry

NUWEIBA, South Sinai — Over the past six months, tourism sector investors in South Sinai have sold their furniture, kitchen equipment, safari jeeps, diving gear and in some cases were forced to give up whole facilities in return for the debts they’ve compiled due to severe income shortages and flaring prices.

Driving from Taba, Sinai’s last beach town on the Israeli border, dozens of resorts and beach camps dotting the 45-mile road to Nuweiba were deserted. The Red Sea’s powerful winds, once ridden by thousands of surfers from across the world, tore down the palm-leaf bungalows and blew piles of sand into the wooden beach cabins viewing the Aqaba Gulf and a sun rising above the mountainous shores of Saudi Arabia.

Business owners in Nuweiba and Dahab, two of South Sinai’s top tourist destinations, believed that the tourism sector scored its highest losses since President Mohammed Morsi took office in June 2012, a state of depression that shattered their expectations of a flourishing business that would emerge with the political stability Egyptians hoped the elected president will bring after a couple of years of instability that followed the January 25 uprising that overthrew former president Hosni Mubarak.

“The profit I am making now is barely a quarter of what I used to make last year,” said Amr Hagras, a 30-year-old who owns a restaurant on the beach front of Dahab.

Hagras, who lived and worked in Dahab since 1997, explained to Al-Monitor the three levels of suffering that business owners are enduring in South Sinai. “You barely make enough money to cover your expenses, you make less money and cover the rest from your savings, or you finish your savings and you get indebted to the landlord and suppliers.”

“The third level is the worst, and it’s the highway to losing your business premises and its contents,” said Hagras, who is already in the third level.

According to Hagras, two of his fellow business owners had to surrender their premises and contents to landlords and suppliers after compiling more than $20,000  in debts.

“The reason we kept fighting over the past couple of years is that we always waited for political and security stability, and the fact that we have nowhere else to go and make a living, this is where we grew up and built our lives.”

Amr Al-Mokhtar, a 38-year-old antiques shop owner, hadn’t seen a customer all day when he sat down for coffee at his neighbor’s beach restaurant. They both dwelled over the ailing tourism sector that once garnered hundreds of millions of dollars to both investors and the state.

“The arrival of the Muslim Brotherhood to power influenced tourists and triggered a lot of concerns that could be totally false, but the government is not doing anything to fight it,” said Al-Mokhtar. “Now we are hearing rumors that the Islamist powers, including the government, of slowly killing beach tourism which doesn’t rhyme with their ideologies, not to mention the major security crisis that the government fails to control.”

A few hours after Al-Monitor’s talk with both Hagras and Al-Mokhtar, an Israeli and a Norwegian tourist were kidnapped on their way to Dahab on Friday, March 22, by armed Bedouins.

“The government called me to mediate their release, but why should I help them?” a tribal leader from South Sinai told Al-Monitor at his beach tent near the town of Nuweiba. The popular but feared tribesman spoke on condition of anonymity. “They kidnapped them because their Bedouin relatives are jailed on trumped-up charges. It happened several times before and every time security officials reached out to me. I mediated the immediate release but the government never fulfilled its promises of retrials or dropping the unjust sentences,” said the tribesman.

He made a phone call and ordered whoever was on the other end of the line to “treat the hostages well, feed them generously and give them a night tour in the valleys to see the stars and the almost full moon.”

Both abductees were released on Tuesday.

Back in Nuweiba, Habiba Village received its first tourists in more than a week, two Dutch tourists on their way to the Jordanian port city of Aqaba. They rented a room for one night.

“This is the first guest we receive in a week. Last time it was a Swiss man who also stayed for one night,” said Maged El-Said, the founder of Habiba Village and Organic Farm, who lived and worked in South Sinai since 1989.“Before the revolution, our village was a guesthouse for tourist groups to have lunch or dinner on their way to the main destinations. We catered to around 400 tourists per day. After the revolution, business dropped to around 50 customers per day.

“Since Morsi took office, business dropped again but this time to less than 30 customers per week, that’s when we’re lucky,” said El-Said, who decided to redirect all his finances, workers that he pledged never to lay off, and effort into an aspiring organic farming project that now involves dozens of Bedouin families that lived mainly off tourism, and have been suffering for the past couple of years.

“The government is now demanding me to pay around $10,000 in taxes and insurance; they are charging me according to the profits I made before the revolution,” said El-Said, who awaits the government’s action after he failed to pay.

But it’s not only tourists that fear coming to Egypt, international tour operators and travel agencies lifted the volatile country off their destination maps, and the state-owned Egyptian Tourism Authority didn’t take part in the Romanian Tourism Fair, one of the world’s most famous travel fairs, held in Bucharest on March 14, 2013.

Egypt’s no-show at the tourism expo was unexplained and came amid repeated statements by Prime Minister Hisham Kandil confirming the government’s support for the struggling industry.

“I don’t know where the government stands from all this, it was such an embarrassment to Egyptian businessmen that our country failed to be represented in international fairs,” said Gasser Riad, who owns a multimillion-dollar tourism business based in South Sinai.

Riad believes the lack of security that led to kidnappings and shutting down major roads in Sinai and gasoline shortages are the top reasons that drive tourists away.

“The Nigerian embassies in Israel and Egypt warned their citizens against traveling to Sinai; we lost 7,500 Nigerian tourists in the past six months, the state lost more than $120,000 paid for travel permits only and businessmen lost millions of dollars,” said Riad, “and that’s only one example among dozens.”

On Tuesday, as the abductees were released, the Dutch tourists at Habiba Village were about to leave to Jordan, and the 1% occupancy of the sandy beach resort will once again drop to zero.

“We have never been as hopeless as we are now,” said Maged El-Said.

Mohannad Sabry is a Cairo based journalist and a finalist of the 2011 Livingston Award for International Reporting. Follow him on Twitter @mmsabry

[Habiba Village & Organic Farm in Nuweiba, where Sabry spent two nights, refused to charge him for accomodation. The owner, Maged El-Said, believes that journalism is equivalent to volunteering at the community farm. In return, Sabry volunteered to clean the beach and moved around 300 kilograms of seaweed that would be turned into organic fertilizer. He also collected around 30 kilograms of plastic waste dumped by ships in the Aqaba Gulf and washed ashore by tide. — Editor]