Despite recent meetings in Cairo between Fatah and Hamas aimed at reconciliation, in light of current conditions the two sides are still far from reaching a lasting agreement, writes Naela Khalil. 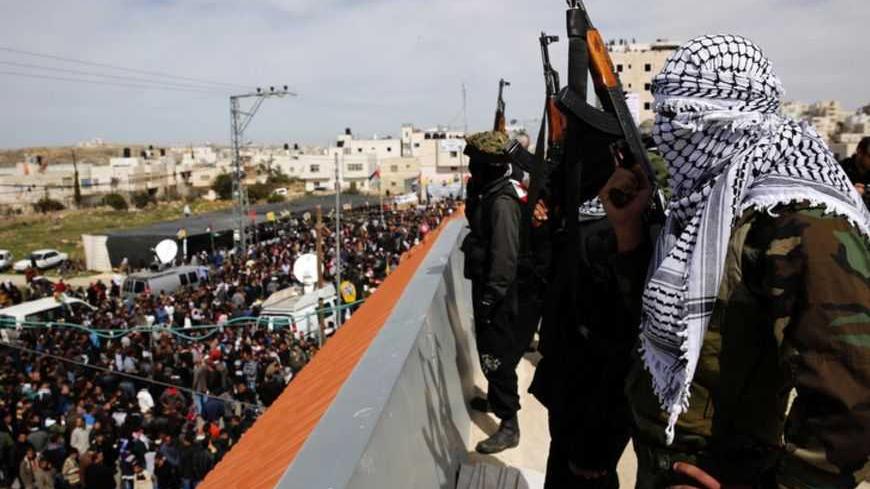 Masked Palestinian gunmen hold weapons atop a roof during the funeral of Arafat Jaradat in the West Bank village of Se'eer, near Hebron Feb. 25, 2013. - REUTERS/Darren Whiteside

Despite the "warm peace" witnessed between Azzam al-Ahmad, the Fatah official responsible for the reconciliation file, and Moussa Abu Marzouk, the deputy chief of Hamas' political bureau, on Feb. 28 in Cairo, the meeting's good feelings did not transfer to the West Bank or the Gaza Strip in any way. Moreover, the relationship between the two movements continues to deteriorate.

Political analyst Hani al-Masry, who is currently in Cairo following up on Palestinian reconciliation meetings, noted, "Yes, today there was a meeting and a  'warm peace' between Ahmad and Abu Marzouk, whoever saw them would even assume they were friends and that the relationship between Fatah and Hamas was fine. However, the situation on the ground between the two movements is drastically different."

The recent exchange between Ahmad and the head of the Legislative Council, Aziz Dweik, had a significant impact, deepening pessimistic feelings among a broad sector of the Palestinian people that any talk of reconciliation is just for media consumption, having no effect on the ground.

This exchange of words, which began on Feb. 21 and was covered by media outlets, has snowballed. It has led to Dweik appearing on a Palestinian TV channel on Feb. 26 to say: "I am upset that Ahmad is the head of the Fatah delegation. This man is incompetent both psychologically and intellectually. The fact that he has accused me of coordinating with former Israeli Prime Minister Yitzhak Rabin means that he is either drunk or detached from reality."

According to Fadel Hamdan, a leader of Hamas in the West Bank, "The recent media crossfire is characterized by a personal dispute between the two sides — Dweik and Ahmad."

These accusations between Fatah and Hamas have cemented a general belief that the ongoing meetings between the two sides in Cairo are meant to give the Palestinian public the impression that reconciliation efforts are continuing, and to perpetuate the idea that is only a matter of time before the two sides overcome existing obstacles and reconcile regarding contentious issues, thus preparing for a reconciliation that has been in the works for more than six years. The reality, however, is different.

All of the reconciliation meetings that have taken place since the beginning of this year have failed to reach an agreement on any of the contentious issues. This includes Hamas' demand to partner with the Palestinian Liberation Organization (PLO) and the security services, as well as Fatah's demand to organize elections. According to Mohammad Younis, a journalist who focuses on reconciliation efforts, the latter demand has raised fears among Hamas that Fatah intends to strip it of control of the Gaza Strip in the event that elections are held according to the current status quo.

According to Masry, "Until now, there is no joint political program between the two sides to end the division. There has been a rapprochement of sorts, but it has yet to reach the level of any joint program."

He explains, "Any reconciliation that does not include an agreement to end the institutional division, as well as the division of security services and control over the Gaza Strip, will be useless, only maintaining the current division among the Palestinian body."

While both Fatah and Hamas have emphasized via their leaders their determination to achieve reconciliation, the facts on the ground indicate that the atmosphere is heading towards division. In the best of scenarios, reconciliation efforts between the two sides will remain at a standstill. The media crossfire between the two is at its peak and the level of freedoms on both sides continues to deteriorate.

Mustafa Barghouti, the coordinator of the Freedom Committee aimed at building confidence for reconciliation meetings in the West Bank, emphasized that "freedoms in the West Bank and the Gaza Strip continue to deteriorate. Efforts are now focused on stopping this deterioration."

The committee is now primarily focused on stopping this decline, not preventing it. Not a day goes by without the committee observing the violation of Palestinians' human rights in the West Bank and the Gaza Strip. These violations begin with travel bans and go on to include arrests based on political beliefs and preventing people from working.

Although Barghouti hopes that the deterioration will not intensify — and thus be exploited by the media to cause a further decline in reconciliation efforts — he refuses to say who is responsible for this regression in freedoms. He only says, "There are those who are deliberately withholding information in order to influence matters on the political level and prevent any progress in reconciliation efforts."

Examining the level of freedoms can measure the extent of progress — or lack thereof — in reconciliation efforts on the ground, independent of statements made by leaders of the two factions. There has been a massive decline in freedoms in the West Bank. This includes security services questioning journalists and those affiliated with Hamas — both employees and students — and arresting some of them for their political affiliation. Meanwhile, dozens of non-governmental organizations in the West Bank that are affiliated with Hamas have been closed since 2007.

This situation is no better in the Gaza Strip, where members of the Fatah movement continue to be persecuted and arrested. Moreover, Fatah delegations are prevented from entering Gaza. The most recent manifestation of this restriction on freedoms was a decision issued by Hamas' Ministry of Interior and National Security, which require citizens who want to travel through the Beit Hanoun crossing to get approval from the ministry's General Administration for Residency and Foreigners' Affairs. This means than any Gazan who wants to travel outside the strip for any reason — including education, medical treatment, or visiting family in the West Bank — must first get consent from the Interior Ministry in Gaza.

Ahmad Assaf, a spokesman for Fatah, attributed the lack of any tangible progress in reconciliation — despite recent intense meetings in Cairo — to "the intransigence of Hamas, which was terrified that approximately 351,000 voters had the courage to register for elections. Given this, along with the fact that thousands of Gazans participated in the launch of Fatah [in the Gaza Strip], it is obvious that Hamas is afraid."

He said, "Hamas is witnessing a crisis in their leadership, whereby certain leaders are in favor of reconciliation and others are against it. This latter group, however, is currently the strongest."

The Fatah movement notes that "the repression of freedoms has become characteristic of the Gaza Strip. Citizens are not allowed to organize marches similar to those that citizens in the West Bank organized following the martyrdom of Arafat Jaradat in an Israeli prison, or to show solidarity with prisoners on hunger strike. Hamas has banned any demonstration near Israeli checkpoints and in the buffer zones."

Hamdan, however, denies that this is true. He stresses that "the people of Gaza reacted in a remarkable way to the situation of the prisoners. Yet the scene there was different from that of the West Bank due to the delicate security situation."

But in the midst of the media war between the two factions, it is impossible to deny that the word "reconciliation" has lost its meaning to the people; they no longer await the meetings in Cairo with enthusiasm.

Hamdan noted, "We know that the term 'reconciliation' has lost its meaning as a result of its constant mention. However, the political dispute between Fatah and Hamas is very old and dates back to before 2007. Nevertheless, we must come to a political agreement to emerge from this crisis."

Yet Masry, who has been following reconciliation meetings since they began, summarizes the situation: "It is important that both movements do not tell the people they are working to end division. Reconciliation efforts have transformed into a process in and of themselves. They resemble the peace process that began decades ago and could not end the Israeli occupation or achieve peace."

Naela Khalil is a reporter for the Palestinian daily newspaperAl-Ayyam. She was a reporter for the UN humanitarian news and analysis agency IRIN (2005-2006), the UAE magazine Al Maraa el-Muslema (2003), the Jordanian dailyAl-Dustur (2002-2003), and the An-Najah Office for Media and Journalism (2001-2002).