Abdullah Ocalan, imprisoned leader of the Kurdistan Workers Party (PKK), calls for "armed members to move out of Turkey's borders." 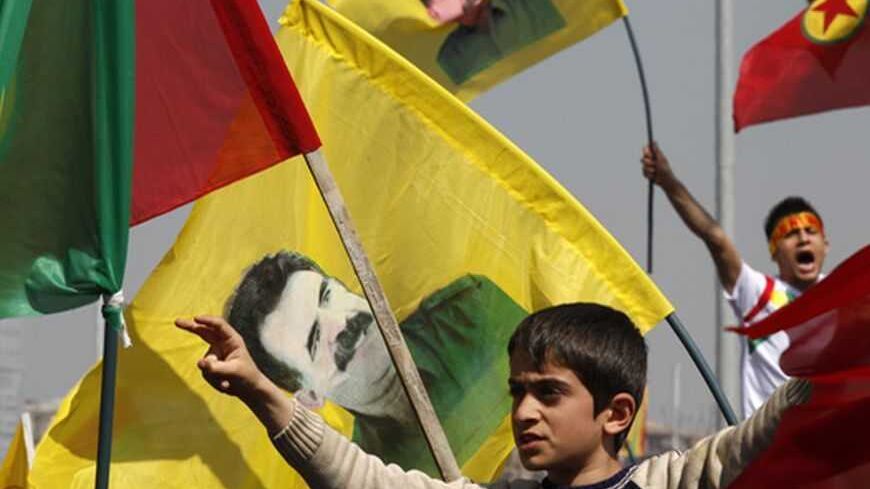 Jailed Kurdistan Workers Party [PKK] leader Abdullah Ocalan’s Newroz message to a large crowd in Diyarbakir on March 21 revealed some significant overlaps with Turkish Foreign Minister Ahmet Davutoglu’s lecture in the same city at Dicle University on March 15 asking Kurds to give their full support to the government’s new initiative and aiming to end the bloodshed in the country.

Swinging between the fifth century B.C. and the present, Davutoglu chose to bypass the Republican era as he laid out his vision of building a new way forward in shaping the minds, culture and politics of the region. He referred heavily to the Islamic architecture of mosques that symbolized the unity of people in these lands. Ocalan, too, talked about ancient times and referred to the three Abrahamic religions in reference to respect and harmony that existed for centuries on the Anatolian peninsula. Surely, it was quite a thought-provoking reference from Ocalan to have religious prerogatives in his message as his rebel movement is structured around the Marxist-Leninist ideology.

Falling short of calling a cease-fire or laying down arms, Ocalan asked the “armed members to move out of Turkey’s borders” on Thursday [March 21] as Kurds marked the beginning of their new year. His remarks complemented what Davutoglu said earlier. “For the last two centuries, the imperialist powers injected problems among Arabs, Turks, Persians and Kurds as they imposed superficial borders by creating nation states. These exploitative regimes, oppressive and rejectionist policies outlived themselves,” Ocalan said. “Peoples of the Middle East and Central Asia are now waking up. They are returning back to their origins. They want to stop the wars and conflicts against each other … People who filled the city squares in their millions now want peace as they celebrate Newroz.” He moved on to say, “The truths in the messages of Prophet Moses, Prophet Jesus and Prophet Mohammed are being realized today with more good news, and mankind is trying to win back what it has lost.”

From Davutoglu’s and Ocalan’s remarks it becomes clear that both would like to come to terms with past mistakes of the state and benefit from the unity of “religious brotherhood.” While this synthesis of using Islam to solve problems may introduce a new set of problems moving forward, it is a fact that jailed rebel leader Ocalan asks parliament to establish “truth commissions,” so that the state would be upheld to face its past sins while fighting against the PKK, which it labeled as a “terrorist organization.” How it will be implemented or how the people at large, mainly in Turkey’s western regions, will approach it are all big unknowns for the time being. The path ahead is not an easy one and it still remains uncertain whether the ruling party has worked out its steps from beginning to end before getting started.

Turkish Prime Minister Recep Tayyip Erdogan, for example, expressed regret for the absence of Turkish flags in Diyarbakir during the Newroz celebrations. “There are still some who try to negatively impact this process, and the absence of a Turkish flag [in Diyarbakir] to me implies a provocative act,” Erdogan said. “Such acts contradict Ocalan’s message. I hope we will soon end the 30-year struggle.”

The US State Department also expressed full support for the Turkish government’s efforts to end the bloodshed in the country. “The United States welcomes today’s [March 21] announcement by the Kurdistan Workers’ Party (PKK) to halt the violence as a positive step toward ending more than three decades of tragic violence in Turkey,” the statement read. “This violence has claimed too many lives and too many futures, and must end. We applaud the courageous efforts of the Government of Turkey and all parties concerned to achieve a peaceful resolution that will advance democracy in Turkey and improve the lives of all of Turkey’s citizens.”

For now, there seems to be a will by the Kurdish nationalists for writing a different chapter, and there is no doubt that permitting Ocalan to address from his jail cell millions in the free world marks a turning point in the government’s attempt to find a solution for Turkey’s Kurdish issue. But despite this atmosphere, the real content of these talks remain somewhat enigmatic and, that whatever it is, it cannot be implemented without bringing it to the full attention of the Turkish Parliament. Therefore, let’s mark today as the beginning of a period where the ruling party has shouldered a tremendous responsibility for bringing closure to the Kurdish armed movement and hope the path ahead brings peace.

Tulin Daloglu is a contributing writer for Al-Monitor's Turkey Pulse. She has written extensively for various Turkish and American publications, including The New York Times, International Herald Tribune, The Middle East Times, Foreign Policy, The Daily Star (Lebanon) and the SAIS Turkey Analyst Report. She also had a regular column in The Washington Times for almost four years.