Ocalan’s Message Is Much More Than a Cease-Fire

PKK Leader Abdullah Ocalan’s message of a “cease-fire” is only the starting point for democratic discussions with the Turkish government, writes Cengiz Candar. 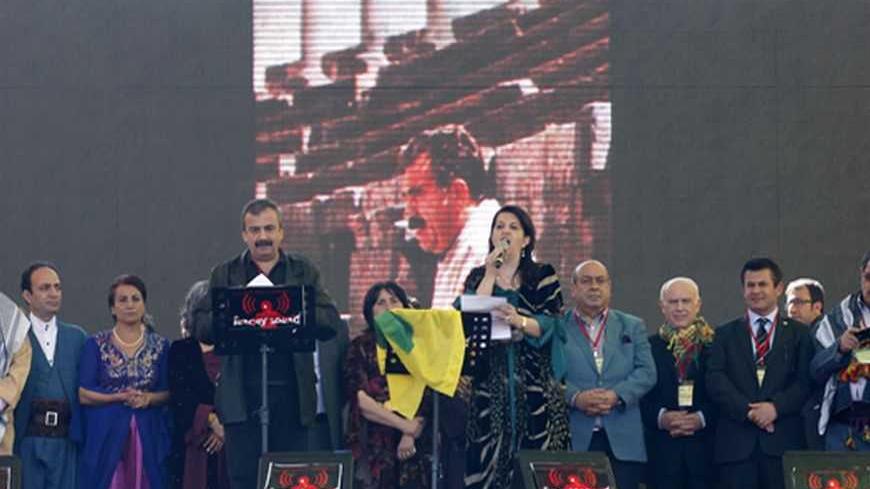 Pro-Kurdish politicians Sirri Sureyya Onder and Pervin Buldan read the statement of jailed Kurdish rebel leader Abdullah Ocalan as they are flanked by other Kurdish politicians during a gathering to celebrate Nowruz in the southeastern Turkish city of Diyarbakir, March 21, 2013. - REUTERS/Umit Bektas

Nowruz was celebrated with unprecedented euphoria by nearly two million people in Diyarbakir, the center of southeastern Turkish — revelers danced in the streets adorned in yellow, green and red, the Kurdish national colors.

The difference between this year's and previous Nowruz celebrations was the expectation to hear a letter by Kurdistan Workers Party (PKK) leader Abdullah Ocalan read out in two languages that everyone believed would be “historic.’’ He was expected to declare a “farewell to arms” and withdrawal of PKK’s military forces from Turkey.

That would effectively end what was described as a 30-year low-intensity war by a former Turkish Chief of General Staff. According to official lexicon of Turkey, terror would thus come to an end.

On March 21, life stopped in Turkey at 1 p.m. [11 a.m. GMT] when two parliamentarians of the pro-Kurdish Peace and Democracy Party [BDP] began reading out Ocalan’s message. The Kurdish version was read by a female parliamentarian and the Turkish one by a popular ethnic-Turk whose true profession is film directing. At that moment, the vast number of television news channels began live transmissions. Events we could not have dreamt about three months ago were taking place in front of our eyes.

Ocalan, in his brief “historic” letter, did not even once use the words “cease-fire," "truce" or "cessation of hostilities.” His text was deeply philosophical. The letter was of an intellectual nature that would not really be congruous with labels affixed to Ocalan in Turkish official lexicon, such as “head separatist,” “terrorist chieftain” or “baby killer.”

The next day, Turkish mainstream press reported Ocalan’s message with headlines such as “A Declaration of Farewell to Arms.” Among them, the tabloid Radikal placed the Kurdish headline “Biji Turkey” [Long Live Turkey] with a photograph of tens of thousands celebrating Nowruz at the Diyarbakir square.

Foreign press opted for a shortcut interpretation implying that Ocalan's message was a declaration of a “cease-fire.”

Pro-PKK Kurdish-language daily Azadiye Welat [Free Country] interpreted Ocalan’s message as “Manifestoya Azadiye” [Manifesto of Freedom] and used those two words as a banner headline for a photograph of the crowd in Diyarbakir.

Or was it rather an ”armistice” as claimed by some media outlets? No, it wasn't that either. The most appropriate definition would be “a call for cessation of hostilities,” but Ocalan’s assessment and appeal is far ahead of even that.

The Kurdish leader set out  from a paradigm shift. Accordingly, he emphasized that the Kurds have acquired their identities and true selves as a result of the PKK struggle, and as such there is no more need to pursue an armed struggle against Turkey and it is time to move the struggle to democratic politics.

The motto of his appeal could be interpreted as “letting the weapons fall silent and allowing ideas and policies to speak out.”

One of the points he underlined was that the solution would be achieved by preserving Turkey’s territorial integrity, within the country but without a nation-state model. This was his way of saying that there will not be an “independent Kurdish state” through secession or dismemberment of the existing country or by partition. By saying that, he also rejected any country or state based on a “single nation,” including that of Turkey.

He described the current borders of the Middle East as superficial borders that at one point in history splintered the Turks, Kurds, Arabs, Persians and other peoples. He talked about ”unity” and "partnership” and defined the Turks and the Kurds as “two strategic powers” in the Middle East.

The entire spirit of the message was based on ending the “fight” and “conflict" between the Turkish state and the Kurds and unifying their forces. For this, above all, guns have to be silent. That is, a ‘’cease-fire” will be the logical outcome of the road Ocalan will take with the Erdogan government. But it is not the end of the road. It is a logical starting point. Departure of armed PKK militants from Turkey beyond borders will then follow. Ocalan did not mention a timetable or its method, but simply stated a principle. He said, “Witnessed by millions listening to my appeal, I say that a new era has started. Politics and not guns will be in the forefront. We are at the phase of withdrawing our armed elements to beyond the border.”

He did not say how and when this will be done. This obviously will be settled through negotiations. There are also steps the government has to take, such as drafting a new constitution that will eliminate the ethnic definition of citizenship, releasing thousands of Kurdish politicians from prison and writing laws that allows cases against them to be dropped.

All these are mutual steps to be taken over time. The end of the process will mean full democratization of Turkey and Turkish emergence in the Middle East and international political arena as a democratic center where Turks and Kurds have become one.

Ocalan evaded potentially polarizing issues such as whether the Kurds will achieve their status in a federal structure or in an autonomous region. An increasing number of people in Turkey are aware that Ocalan’s design for the future, which could be described as constructive ambiguity, will empower the prime minister who further enabled the process while the accomplishment of the ongoing process depends on Erdogan's success.

This is why it seems Erdogan and Ocalan have become two odd partners whose fates fused. And, both are clinching to Turkey’s fate. Given that the Kurds have stepped onto a new historical stage as formidable new actors in the wake of the developments in Iraq and now Syria, perhaps the fate of the whole region is being sealed.

Such was the implication of Ocalan message on Nowruz, March 21, 2013 — it was much more than a cease-fire.

He clearly stated: “Today we are waking up to a new Turkey, a new Middle East and a new future …”

Cengiz Çandar is a contributing writer for Al-Monitor's Turkey Pulse. A journalist since 1976, he is the author of seven books (in Turkish), mainly on Middle East issues, including the best-seller Mesopotamia Express: A Journey in History. He contributed to two Century Foundation publications: "Turkey's Transformation and American Policy" and "Allies in Need: Turkey and the US." He is currently senior columnist of Radikal in Istanbul. Candar was a special foreign policy advisor to Turkish President Turgut Özal from 1991 to 1993.