Ocalan Signals Openness to Talks With Turkey on Kurdish Issue

Cengiz Candar interprets news reports about the meeting between members of the Peace and Democracy Party and PKK leader Abdullah Ocalan at the prison on Imrali island where he is serving a life sentence. 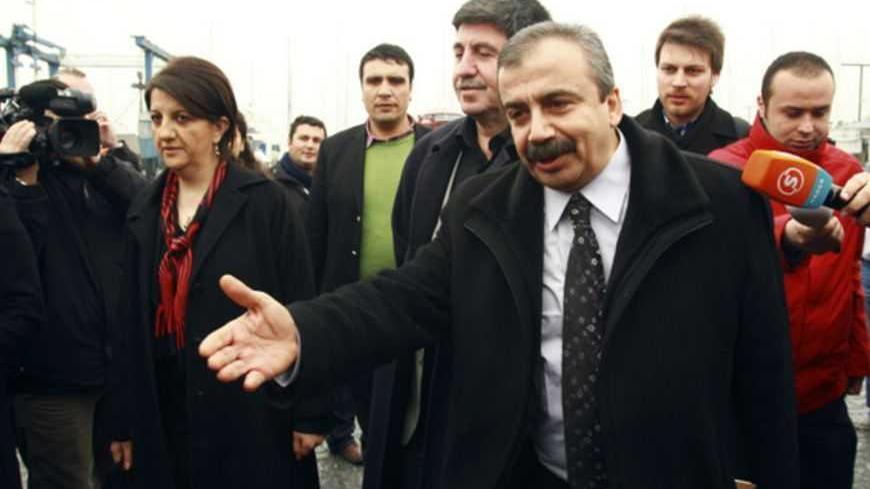 Milliyet, one of the most influential dailies of Turkey, rattled public opinion last Thursday. Milliyet headlined the notes of the meeting between three parliamentarians from the Peace and Democracy Party [BDP] and the PKK leader Abdullah Ocalan at the prison on Imrali island where he is serving a life sentence. In journalism jargon, Milliyet scored a true scoop.

But in Turkey’s fragile and even volatile political climate, it is impossible for such a news report to be received as pure news. The opposition immediately went on the offensive. Devlet Bahceli, leader of the Nationalist Action Party [MHP], the rigid and passionate representative of Turkish nationalism, alluded to the notes of the meeting with Ocalan, accusing Prime Minister Recep Tayyip Erdogan of “treason” because of the steps he had taken for a solution to the Kurdish issue.

Ruling party circles quickly went on the defensive and counterattacked by claiming the meeting notes published by Milliyet did not reflect the truth and that they were a provocation to sabotage the reconciliation process.

AKP parliamentarian Yalcin Ozdogan, who is very close to the prime minister and has the title of “senior adviser,” in his March 1 column in the daily Star defined the Milliyet report in his article’s title, “Saboteurs in Action,” and declared the contents of the report as “null and void.”

Negative voices were also heard from inside the government, although they were not as severe. Egemen Bagis, the minister responsible for EU relations, and several other ministers expressed their displeasure.

The international press, even the most prestigious among them, did not report the event accurately, probably because of the difficulty in comprehending Turkey’s complex politics. For example, Reuters reported the Imrali meeting notes with Abdullah Ocalan under the headline, “Kurdish Rebel Leader Airs Frustrations in Turkey Peace Process.” In the report, it wrote: "Ocalan has accused the fighters he commands of hampering his efforts to end decades-old conflict and warned the Turkish government against any attempt to dictate terms."

Reuters came closest to truth when it said, “… warned the Turkish government against any attempt to dictate terms.” The headline and the rest of the report did not tell us about Ocalan but suggested that to understand him would require expertise similar to understanding the Kremlin.

For those who have adequate comprehension of the mindset of the PKK leader, his approach to issues and his lexicon, there was nothing surprising or even new in his views transmitted to the public via Milliyet. I am one of them.

The dialogue re-launched by the Erdogan government through the head of the National Intelligence Organization [MIT] to bring an end to the very bloody period of clashes with the PKK over the past year and a half was explained to the outside world as “a move to end terror,” and it was suggested Ocalan is set to issue instructions to move the PKK outside of Turkish borders in coming months.

Some writers close to the prime minister and journalists manipulated by the MIT took it upon themselves to shape public opinion by giving the impression they had a monopoly on the information about talks with Ocalan.

In the news reported everywhere, it was claimed that the PKK leaders at Kandil Mountain in northern Iraq were resisting Abdullah Ocalan. Reading those reports, one would get the feeling that Ocalan’s authority was being tested. Similarly, the Peace and Democracy Party [BDP], which is believed to share the same political line with the PKK and has effective representation in the parliament, was being portrayed as a tool closer to Kandil than to Ocalan, therefore making it a target of polemics.

The meeting notes with Ocalan printed in Milliyet reflected a reality that would upend all reports and speculations on this issue for the past two months. When you look at Ocalan’s words, it is clear that he was not a partner who had lost all his aces and had no conditions as desired by the government.

He openly says that he wants to declare ‘’non-hostility,” in other words a lasting cease-fire, before March 21. This date marks Newroz, the most important holiday of the Kurds, which welcomes the coming of spring. But you could also sense that he isn’t eager to take a step for unconditional withdrawal of PKK’s armed forces as soon as possible out of Turkey, which would be seen by his constituency and the Turkish public as a kind of surrender. His entire oratory signals to the Kurds that he would negotiate and even bargain with the government to achieve an era as “equal citizens.”

In view of major gains that would be made, he lets people understand that he is flexible enough to lay aside concepts and aims such as “”autonomy for the Kurds” that cause allergic reactions in the Turkish people, the state and the government. By saying that “democratization of Turkey” would mean freedom for all, he considers asking for amnesty for himself or to improve his conditions by transferring to house arrest. In a way, as Nelson Mandela did, he appears to be putting his own conditions on the back burner for the sake of a ‘’peaceful reconciliation.’’

Of course there are some other typical elements of Abdullah Ocalan's style in the meeting notes that caused much excitement. They not only reflect a spectacular megalomania but also his success in preserving his authority over a sizable segment of the Kurds, still being heeded by the outside world despite his 14 years in prison.

In the meeting notes, he gives the impression that he is the one shaping the recent history of Turkey. Naturally Erdogan and his cohorts who claim the same were happy hearing that. Perhaps those shouting out, “Sabotage, provocation,” from AKP ranks are actually worried that the prime minister would terminate the reconciliation process as a reaction to Ocalan’s rather overblown claims. Hence the panic over the printing of the meeting notes.

Of course there are those who believe there is truth behind Ocalan’s wish to be “considered dead should the process fail.” In case of such a failed outcome, “50,000 PKK guerrillas” together with the fighters in Iran, Iraq and Syria will continue the war as a threat. But “Ocalanology experts” interpret his words not as a “threat” against the state or a negotiation ploy, but as a message to his own base that there will not be a surrender.

The most important was his message to Erdogan that, in case there is an accord on articles related to the Kurds in the new constitution, he will be supporting Erdogan’s presidential system. This means that to achieve his most vital strategic goal, he is willing to support Erdogan. That would mean an inevitable AKP-BDP alliance in the legislative arena.

An AKP-BDP alliance would mean a total overhaul of the “strategic structure of Turkish domestic politics.” This is why the opposition parties, most of all the rigidly Turkish nationalist MHP, made a big flap about the meeting notes and termed Erdogan’s legitimizing of Ocalan as ‘’treason.”

Discomfort in the ruling party has two sides. One group feels that their hands have become weaker in further negotiations with Ocalan, and another group worries that such public exposure of Ocalan’s views could bring an end to the process.

Most notable has been Erdogan’s coolheadedness in all this mayhem and his staying out of the "sabotage choir.”

BDP leaders who went to meet with the PKK leaders to deliver Ocalan’s letter used the most polite words ever about Erdogan in later statements.

For a while, the grapevine has been full of reports that the accord worked out by the MIT head, who is talking to Ocalan with the prime minister’s support, is much more advanced than what the public knows and is told.

It is becoming apparent that the talks with Ocalan have crossed the Rubicon. Since nobody will ever be willing to pay the political price of ending this process, the process has become irreversible.

Turkey, a paradise of conspiracy theories which is unaccustomed to transparency in solving such complex issues, is now living through the trauma and shock of the publication of the meeting notes with Ocalan.

If we recover — and we will — and cure ourselves of the shock effect, we will witness a series of unpredictable and unprecedented developments. Surely this is not a process immune to provocation.

Yet, an unorthodox reading of Milliyet’s scoop heralds the most hopeful near-future for Turkey.