Daoud Kuttab writes that, for Palestinians, what matters is not just what was said, but more importantly what happens next. 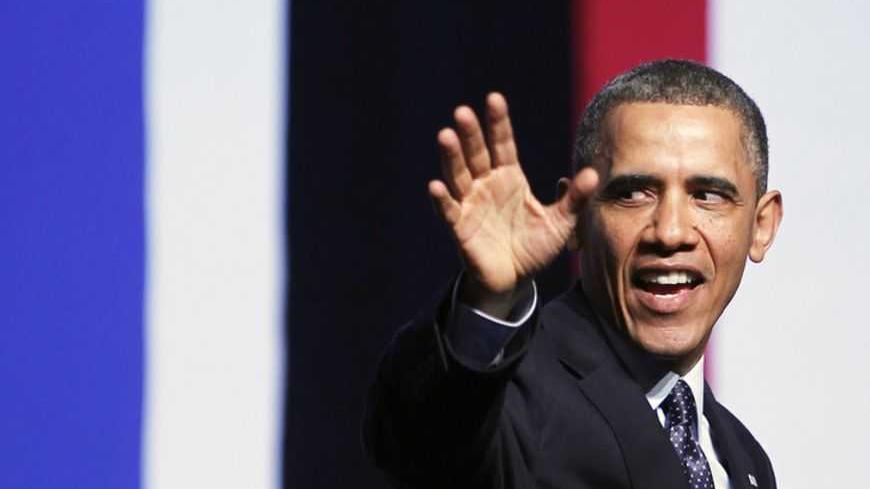 The hashtag that was trending on Thursday afternoon said it all. ObamainIsrael was one of the top hashtags on Twitter most of the afternoon of March 21, especially during and after the speech made by President Barack Obama to a group of young Israelis.

There was no doubt about the goal of the visit: to smooth relations with Israel and to attempt to reconnect with the Israeli leader Benjamin Netanyahu, whom the president fondly called by his nickname, Bibi.

This charm offensive could be seen in one of two ways: that Obama has surrendered to the pro-Israel lobby and came to mend relations with Israel its leadership and its people. He made all the right moves, visited the right places, said the right things and smiled every time the cameras captured him and his new friend Bibi together. Obama gave the Israelis a green light to attack Iran when it chooses, repeatedly said to them, "We have your back," and announced all kinds of goodies for years to come. He praised Israeli enterpenuership, high tech, medical research, patents, as well as brought back the biblical stories and reconnected the Christian-Judiac ethos. He adopted Netanyahu’s line that Palestinians must recognize not only Israel and its so-called right to exist, but that Palestinians have to recognize Israel’s Jewishness. Even when he was urging peace with Palestinians, he took Israel’s side at every juncture, blaming Palestinians for missing opportunities for peace, shooting rockets that deny Israeli children their sleep, and that Israel lives in a bad violent neigborhood (not that it forced itself on the region by brutal terror and violence).

The other scenario is that all of this lovefest was aimed at winning over Israel because the president understands that this is where all the heavy lifting will have to take place. Those who agree with this argument believe that he wants to soften the target before going in for the kill. To do that, he wants to remove all security excuses that get in the way of taking the hard decision of ending the occupation and allowing the creation of a viable Palestinian state.

It is unclear which of these two scenarios are the real goals of the Obama visit. What is important, however, is not the words but the actions that will follow. What will the president and his men do to restart the talks on clear and unambiguous terms of reference that will not be used to delay and obfuscate the process?

For Palestinians, the trip was largely a sideshow, part of the needed décor to complete the scene and to show ‘respect’ to the Palestinian aspirations. Little time was spent in Ramallah and the US president who will lay wreaths at the grave of the founder of Zionism, [Theodor] Herzel, and the hawk-turned-dove Yitzak Rabin as well as Yad Vashem didn’t show respect to the founder of the modern Palestinian national movement, nor did he even think of visitng the grave of Palestine's famous poet Mahmoud Darwish. No doubt US officials will say that they didn’t want to be drawn by Israelis into side debates, which again proves the point that this is an "ObamainIsrael" mission.

To be fair, the US president did take a little time out of his long, 5,000-word speech to talk about Palestine and Palestinians, the need to end occupation and the importance of Palestinian statehood (mostly for the security of Israelis). He also slammed the Israelis in three important areas, which could be an early litmus test to see if the president’s words have any more than rhetorical reach: He said that settler violence is not punished, that Palestinians are not allowed to move around and that farmers are not given access to their own land.

In the comings weeks and months, it will be interesting to see if settler vigiliantism and unbridled violence will continue without punishment, especially with such high-profile settlers in the new government and in the seat of the deputy Knesset speaker.

Access to Palestinian lands, especially in Area C which compromise over 60% of Palestinian land is yet another test of whether the Israelis want peace or not. The European Union and the US have supported the plans of Prime Minister Salam Fayyad (who received a badly needed positive nod) to develop Palestinian lands in the Jordan Valley and other rural areas will be crucial to the growth of Palestine and its economy. A good sign in this regard that would combine these last two points would be if the Israelis allowed the Fayyad government to start building the Palestinian airport, which is planned in Area C near the sea-level sign on the Jerusalem-Jericho road.

In all languages, there are sayings to the effect that talk is cheap. While words are important, the frustration of Palestinians after decades of living under a foreign military occupation has thickened the skin and made people skeptical even of the most genuine-sounding leaders.

Just last week, Israel banished a Palestinian political prisoner whom it couldn’t charge, and who was on a prolonged hunger strike, rather than release him. Ayman Sharawneh, a West Bank Palestinian, was released on condition that he remains in Gaza for ten years. This banishment would become obsolete if Palestinians from the West Bank and Gaza were allowed to travel freely.

Obama spoke forcefully about the issue of freedom for Israelis and Palestinians. To applauding Israelis he said neither occupation nor expulsion is the answer. Palestinians have a right to be a free people in their own land. The freedom of Ayman Sharawneh or Samer Issawi, who has been on hunger strike for a long time in protest of administrative detention without charge or trial, could be a sign that the process for the freedom of a nation is on track.

If such freedoms of movement and access to land are denied and if settler violence continues with impunity, it will be much more difficult to convince anyone that Israel has any serious plans for ending its occupation of lands occupied in 1967.