Is Kuwait Serious About Bedoon Naturalization?

Given the history of unfulfilled promises by the Kuwait government, the Bedoon community is skeptical of the country's seriousness in granting them citizenship, Mona Kareem writes. 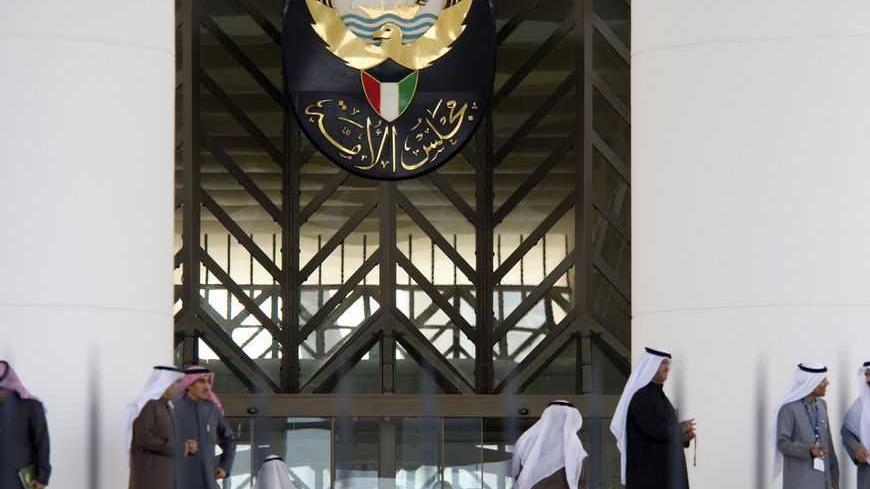 Kuwaiti men stand at the main entrance of the Kuwait Parliament, Dec. 10, 2009, after a session on the issue of Bedoon (stateless Kuwaiti residents) was canceled due to the lack of quorum. - REUTERS/Stephanie McGehee

When the opposition dominated the parliament for few months in early 2012 before it was dissolved, the Bedoon (the Arabic word for stateless) were disappointed that their issue was not a priority. Bedoon activists are still standing with the opposition with the logic of having the government as a common enemy. Another reason to this coalition might be the common tribal background of both groups that make them feel discriminated against by the state. The community is not hoping for much from the opposition, but within the past few years, they have been able to compare the outcomes of an oppositional parliament to a puppet parliament that was elected last December, despite boycotting campaigns and the amendment of voting law.

The Bedoon have been very loud about their demands since the beginning of the Arab uprisings. They have been in the country for generations, but the government still claims that they are ‘hiding their original documents’ from Saudi Arabia, Iraq, and Syria. In 1986, Kuwait decided to deprive this community of all their rights; education, health care, employment, and any form of documentation. Since February 2011, Bedoon protests prompted strong political changes, pushing the opposition to adopt the cause and placing the government under the spot to face international criticism.

Recently, Kuwaiti parliament passed a law to naturalize 4,000 of the Bedoon. The law was widely welcomed, but not by the community itself. Such laws were passed before, but were not met with commitment. It takes years for the parliament to approve such a decision and it takes years for the government to waste and buy time with all the corruption and bureaucracy. This highlights the limits of the parliamentary power in Kuwait as it is not able to carry a process of accountability and monitor the government’s performance and responsibilities.

There are three main problems with the newly passed law.

First, the naturalization was not specified for the stateless of Kuwait. Instead, the law was made to naturalize 4,000 "foreigners." On a theoretical level, this means that the parliament does not acknowledge the Bedoon as a community of Kuwait. On a legal level, this makes naturalization choices open to any non-citizens. In previous naturalizations, many of those who received the citizenship were not stateless, but Iraqis, Saudis and some other nationalities. It was clear to everyone that those got citizenship because of their relationships to some officials or ruling family members, especially that they were registered as residents of the country.

For example, the head family of the Eniza tribe was naturalized in 2008 despite having both Saudi and Iraqi citizenships; this was directly understood as a purchase of tribal approval. With such choices made, Kuwaitis spill their anger on the stateless community as they confuse the Bedoon for those residents who are being naturalized for the interests of those in power. Previously, anti-Bedoon parliament members such as Ahmed Al-Mulaifi used those examples to stop any attempts to naturalize the Bedoon. In short, the naturalization process must be transparent to be carried in a healthy way that does not reflect negatively on the stateless community and any similar future decisions.

The second problem is, perhaps, more political. Right after this law was approved, a group of 29 Kuwaiti academics and writers wrote a public petition to the parliament regarding the regulations of naturalization. The group demanded that the parliament’s committee for human rights put regulations for naturalization of Bedoon regardless of racial, geographical, tribal or sectarian differences. In other words, those writers were speaking against administrative discrimination practiced against the Bedoon in previous naturalization lists. The Bedoon believe that most of those who get naturalized are Sunni Muslims of Persian descent or tribal Saudis, but not those of Iraqi tribal roots.

In 1996, Kuwait formed a committee to investigate the origins of the Bedoon as if one’s background criminalizes them and omits their right to citizenship. Considering the tribal dominance over the opposition movement in the past three years, I expect those naturalized to be as far as possible from those of tribal families in a way to disempower the opposition and bring more loyalists nearby. This is a long-term vision since those naturalized will carry Article 7 of Kuwaiti citizenship that does not allow them to vote or run for elections.

The most important problem is the lack of a systematic solution. NGOs did not miss the chance to congratulate Kuwait for such a decision although it has not yet been executed. I mentioned the opposition in the introduction of the article as I see how it forms the new political reality of the Bedoon community. The opposition-run parliament last year proposed two important laws for the Bedoon; one that grants them complete right to public educational institutions and another that grants them all sorts of documents and some access to employment in the public sector.

Over the years, Kuwaiti officials continue to emphasize that naturalization is “a sovereign decision and a right for the state to decide in accordance to its higher interests.” This use of “sovereignty” is what is at stake here. Naturalization of the Bedoon needs not to be a sovereign decision, but a systematic process that meets the needs and demands of the Bedoon themselves.

Mona Kareem is the founder of BedoonRights.org and a graduate student in Binghamton, N.Y. She is a blogger, journalist and poet with two published collections. You can follow her blog at www.monakareem.blogspot.com.