Al-Qaeda in Iraq has increased its violent attacks to exploit the political and sectarian turmoil gripping the nation, focusing on the Green Zone in Baghdad, writes Mushreq Abbas. 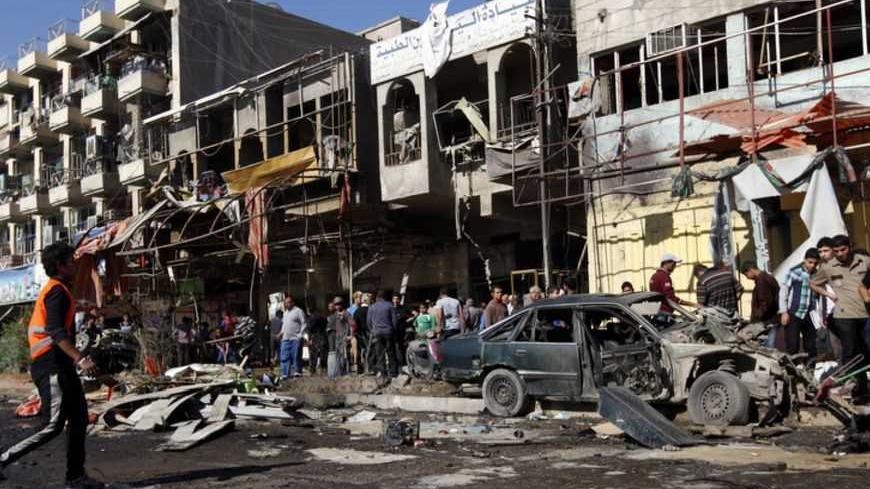 Residents gather at the site of a car bomb attack in the Al-Mashtal district in Baghdad, March 19, 2013. - REUTERS/Mohammed Ameen

It is no coincidence that al-Qaeda has chosen to aim for targets near the boundary walls of the fortified Green Zone in central Baghdad. The Ministry of Justice, which was stormed by militants last week, is less than 500 meters [about 550 yards] from the government’s headquarters and 1,000 meters [.62 miles] from the US Embassy. The bombing that took place in the Karadat Maryam neighborhood a few days later on March 19, 2013 was no more than 100 meters from the government boundary wall.

The attacks — which have resulted in a total of around 300 dead and wounded in 72 hours, and 2,800 casualties from terrorist attacks and political violence, including more than 1,000 deaths so far in 2013 — reveal different messages.

Hours after carrying out the attacks, al-Qaeda not only issued statements claiming responsibility for the operations, but also meticulously detailed the way in which it carried them out. It went so far as to  accurately describe the movements of its members at the moment of the ministry storming. Militants ascended the different floors of the building — which is the “symbol of justice” in Iraq — until they reached the floor that contained sensitive files related to Jihadists, according to the statement, in order to blow it up.

Aside from Iraqi security forces’ interpretation of al-Qaeda’s goals and objectives — interpretations which are often political and are much more interested in exploiting events to topple political opponents, and are less centered on the indications, developments and consequences of these events — al-Qaeda seems to be  more willing than ever to take advantage of this critical moment in Iraq to shift the balance of power in its favor on the ground. It seeks to restore the strategy used by the first generation of jihadists — led by Abu Musab al-Zarqawi — in order to control, adhere to, and turn neighborhoods into permanent strongholds.

The time that it will take al-Qaeda to organize an armed presence in the rural areas of Baghdad, or in a neighboring city, will be determined by the Iraqi government’s inclinations and vision regarding events.

In this regard, it should be noted that in the past few days, al-Qaeda primarily sought to prove that everything located outside the Green Zone is subject to its attacks, and that the group is the only one that determines the right place and time to carry out these attacks

Security forces only partially understood this message. They blocked the roads leading to the Green Zone, doubled the number of guards and checkpoints, and imposed more restrictions and measures in the area.

Yet, on determining the strategies and orientations, security services and political decision-makers have not yet understood that defending the Green Zone should not [be focused] just on its walls. Ultimately, it is an area considered by the people in Baghdad and other cities to be a center that solidifies political and sectarian controversy, and moves tensions down into the street.

Security leaders and some political elites have promoted “conspiracy theories” by talking about “coup attempts” — planned by some politicians, mostly Arab Sunnis — against the regime, and al-Qaeda seeks to achieve a coup today through these attacks.

These inclinations — which are adopted by a group of security leaders close to Prime Minister Nouri al-Maliki — were backed by countless documents, pictures, analyses and confessions. This group is ultimately trying to prioritize its security vision over political decision-making. This is done through the same political intimidation represented by Maliki at present, and by permanently placing him in a climate of a conspiracy against the regime, and the need to expand over-reliance on these same security leaders.

The prioritization of security over politics is an apt way to describe the strategies of the Iraqi government, the head of which has full control of security decisions, as he has in his hands the ministries of defense, interior and national security and intelligence. Moreover, he is assisted by the same group of security leaders who defend the regime against any coup attempts. He is the one who makes political decisions, particularly after the Iraqiya List, the Kurdish Alliance and the Sadrist movement ministers withdrew from his government. He also controls many legislative decisions through a bloc that consists of more than 100 MPs and allies, not to mention claims that the judiciary is subservient to the executive branch.

The new Iraqi coup theory is mainly based on the traditional military coups that were repeatedly witnessed in the 20th century and have become something of the past. Back then, it was enough to control the presidential palace and state radio to announce the new regime.

Today, the equation is more complicated in Iraq. The fall of the Green Zone would not mean the end of the regime, nor would protecting its walls imply preserving the regime. What is missing is a rational vision that sees security at the furthest reaches of the Iraqi border as the boundary for the regime’s legitimacy, and considers legitimacy to be the product of the conviction of a majority of the people — from various groups and communities — to defend the democratic experience, its symbols and boundaries.

Political experiences in Iraq are the same today as they were years ago from within the Green Zone, and now these experiences are in the hands of its leaders more than in the hands of outsiders. Establishing security that prevents criminal groups such as al-Qaeda from carrying out attacks with such expertise will not be achieved before the needs of a normal society are met. They are based on social and political consensus, the fundamentals and principles of any national identity, borders, a system of government, a peaceful transfer of power, and values ​​of justice, equality and freedom.

Iraq's border is not the Green Zone’s border. This fact does not seem to be known by many security and political leaders today. The border requires a vision of wise, rational individuals, not adventurers, to defend it.