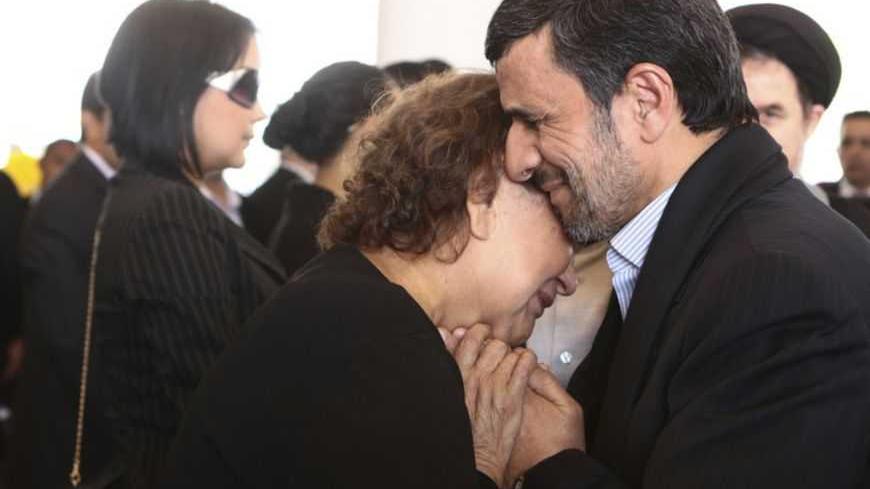 Arab leaders were missed at Hugo Chavez's funeral. None showed up, despite the fact Chavez was known for his pro-Arab stances. According to one of his Arab affairs advisers, "Chavez risked many of Venezuela's interests for the Palestinian cause, but that meant nothing to the Palestinian leaders who did not travel to Caracas for his farewell."

The most senior Arab officials to take part in the funeral – which was attended by more than 30 heads of state – were two ministers representing Syrian President Bashar al-Assad and Palestinian Authority President Mahmoud Abbas respectively. The adviser, who is of Arab descent, spoke sorrowfully. "I couldn't look in his eyes even though he was dead. He did everything he could for Arabs, but their leaders were ungrateful." He added: "We know that people in the Arab world were as sad as Chavez's admirers here." Over one million Venezuelans are of Arab descent. Venezuela's interior and foreign ministers descend from Syria and Lebanon, respectively.

"Arab leaders fear the Americans," said the adviser. "Chavez's stances towards their causes discomfited them. They only care about what the White House wants, so they didn't come."

Isabelle Franjiyeh, who is originally from Lebanon, is a member of the ruling party in Venezuela. She told me when we met after the funeral that Venezuela's commitment to Arab causes would not be affected by such an incident. "We care for the people there," she said. "Our leadership is attached to the grass roots, not the elite." Before leaving, she made a brief but significant remark: "Venezuelans never felt the absence of Arab leaders; they were overwhelmed by [Iranian President Mahmoud] Ahmadinejad's presence."

The Iranian president's presence might have been very important to pro-Chavez Venezuelans, especially after a picture was publicized showing him holding the hands of Chavez's mother. However, this same picture seems to have given Ahmadinejad a bit of headache in Iran and within religious Shiite circles around the world. It is known that in the Shiite version of Islam, physical contact between a man and non-related women is forbidden. According to the website of one of Iran's ayatollahs, "This reality is beyond debate. It would be necessary for you to explain your position and beliefs to others in that by refraining from shaking hands you do not mean to insult them and that you are obeying the rules of your religion."

Several Conservative MPs on the Iran Islamic Shura Council criticized the president's attitude. "Such an attitude by a senior official contradicts with our beliefs," said MP Mohammed Dahqan, who urged the ayatollahs to issue statements condemning the incident.

Another MP, Mohamed Mahdi PorFatemi, said, "If it was anyone other than Ahmadinejad who did so, he would be called a traitor."

Social networks and websites were flooded with the picture, while many pro-Ahmadinejad activists strained to convince people the image had been photoshopped. "President Ahmadinejad is a pious Muslim. He won't do such a thing," said one. As many as 200 comments flooded a page that had posted a photoshopped image showing Ahmadinejad with a man instead of a woman.

Later, video of the incident emerged and the debate over the authenticity of the image halted. The debate then shifted to the reasons behind Ahmadinejad's action.

"She surprised him, and he wasn't able to do anything," said one reader. Another countered, "He could have avoided her." A war of words began, and participants in the dialogue seemed divided. Some gave excuses; others attacked. Some criticized the debate itself in their comments. One of those, a religious activist, wrote, "The woman is almost 80 years old. Why do you all care about this? Chavez's mother deserves to be kissed on her forehead."