The late president of Venezuela won the support of large numbers of Arabs for his anti-Israeli positions, but his stock dropped after the Arab Spring and his continued backing of Libyan leader Moammar Gadhafi and Syrian President Bashar al-Assad, writes Ali Hashem. 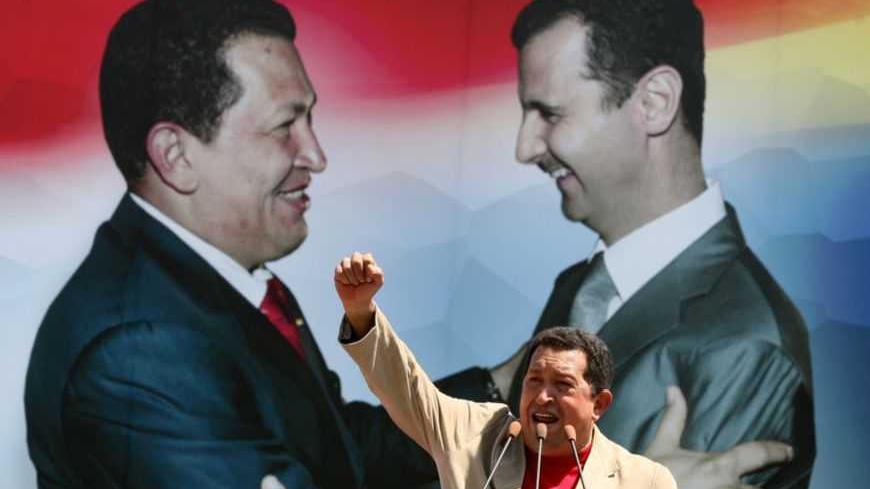 Venezuela's President Hugo Chavez delivers a speech in September 2009 during a visit to Suwayda, south of Damascus and hometown to most of the Syrian immigrants in Venezuela. - REUTERS/Khaled al-Hariri

"Our brother Hugo passed away." These could be the very words the Arab world used to circulate news of the death of Venezuelan President Hugo Chavez.

For many Arabs, Chavez's death means almost as much to them as it does to his loyalists in Caracas. For those who loved him, the news had the impact of shock and awe even though they knew it was coming. The sorrow surrounding his death is not, however, comparable to the level of uncertainty palpable from the first days of his illness. In some quarters, there were fears that the death of Chavez would mean the end of the anti-imperialist alliance that stretches from the Middle East to Venezuela.

Chavez was to many an inspirer — a staunch defender of Arab causes who took hostile stances toward Israel and the United States. In this, some saw Chavez as more Arab than most Arab leaders. Just a few months ago, Palestinian worshippers at Bethlehem's Church of the Nativity held special prayers for his health. This hints at how deeply some in the Middle East will feel this particular man's departure.

Chavez worked his way into the hearts and minds of the grassroots in the Arab world not only with his positions on the issues, but also with his modest lifestyle and his reputation for being close to and championing the poor. One of the reasons for this impression was his decision to expel the Israeli ambassador to Venezuela amid Israel's assault on Gaza in January 2009. Only Mauritania took a similar position; the several Arab states with ties to Israel did not. Chavez capped his decision by referring to Israel as the "murder arm" of the United States. At the time, he was hailed by Arabs as one of their superheroes. They hoisted his picture at many an anti-Israeli, anti-US demonstration. Roads and restaurants and children were named after him.

In July 2006, during the Israeli war against Hezbollah in Lebanon, Chavez visited Tehran and from there made remarks condemning Israel. A few weeks later, in a speech after the war, Hezbollah Secretary General Hassan Nasrallah thanked Chavez, declaring him part of the coalition that stretches "from Gaza to Beirut, to Damascus to Tehran” and referring to him as “our brother Chavez.”

Earlier, in 2000, Chavez became one of only a few leaders to visit Iraqi president Saddam Hussein in Baghdad, and voice his support, while the regime remained under tight western sanctions.

Chavez regarded the Arab world and the Middle East as part of his worldwide cultural and political "war front" against the "imperialist world," led by the United States. Hence he maintained close ties with states known for being stridently anti-American. He counted as a good friend Syria's embattled president Bashar al-Assad, along with Libya's late and toppled leader Moammar Gadhafi. He was an amigo of Iran’s President Mahmoud Ahmadinejad.

In fact, the Venezuela-Iran relationship seriously concerned Israel and the United States. Even the local opposition in Caracas expressed worried that such ties might negatively affect Venezuela's reputation and harm its economic ambitions. Chavez visited Iran on several occasions beginning in 2001, and Venezuela and Iran developed strong ties in particular in the areas of energy production and economic and industrial cooperation.

Chavez was one of a few international leaders who endeared himself to a large number of Arabs, though by no means all of them. Prior to the Arab Spring, it was the pro-West liberalists who did not care for him. After the uprising, however, many of those who had chanted Chavez's name changed their minds. His support for Gadhafi and Assad after they turned their weaponry on their people divided public opinion about him. Chavez viewed the uprisings as part of an imperialist plan to overthrow anti-American leaders in the region. Arab revolutionists accused him of ignoring the pain of those who had once admired him and invoked his name. To them, he became yet another arrogant leader who chose his interests and the tyrants’ over the people's.