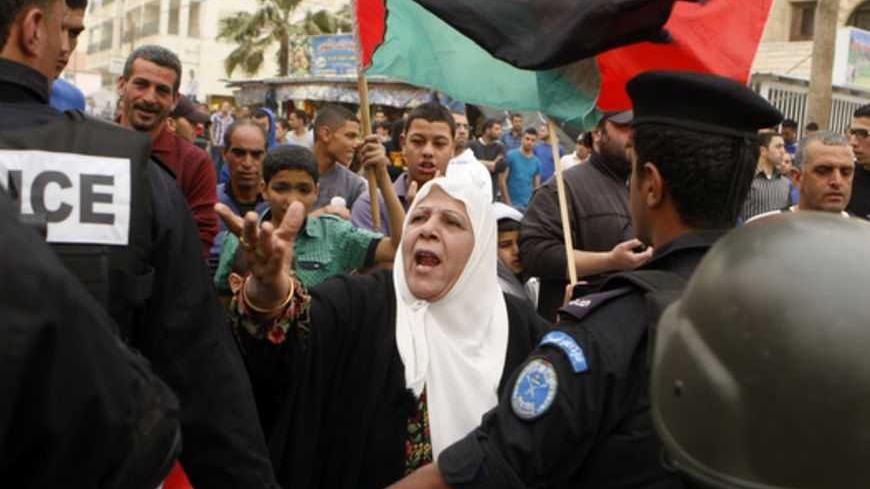 A Palestinian woman argues with policemen during a demonstration against US President Barack Obama's visit to the Church of the Nativity, revered as the site of Jesus' birth, in the West Bank town of Bethlehem, March 22, 2013. - REUTERS/Mussa Qawasma

Shortly after touching down at Ben Gurion Airport in Tel Aviv, US President Barack Obama praised the “profound relationship” between Israel and the US. He “repeatedly affirmed the US-Israeli alliance and insisted it would remain unbreakable in the face of the winds of change blowing in the Arab world," wrote Alex Kane, who noted that while Israeli President Shimon Peres and Prime Minister Benjamin Netanyahu referred to the Palestinians and their willingness to engage in peace talks with the Palestinian Authority (PA), Obama made no mention of the Palestinians in his initial speech.

The visit, its political implications and its significance for the Palestinians living under Israel’s continued occupation of both in the West Bank and the Gaza Strip has been hotly debated. The reaction to this visit by those on the ground seemed rather consistent, however. While demonstrations took place over the past few days in the West Bank, the Palestinians also took part in protests in Gaza City against Obama’s three-day visit to Israel and the West Bank.

“Obama’s visit won’t change much. It, in its current form, is lip service to both sides, the Israelis and the Palestinians, but to the Israeli side for the large part. Obama has displayed profound love for the Israelis which was not clear to us before. I don’t expect Obama to address the core issues of the Palestinian-Israeli conflict such as settlement expansion and the prisoners issue. He, as a matter of fact, has no intention and carries no initiative to solve this conflict. Even if he does, I believe he does not have much influence to change anything regarding Israeli policies.

"There is no doubt that Obama is not welcome among Palestinians, either here in Gaza or in the West Bank. His statements clearly show his complete bias toward Israel against the Palestinians.”

“What worries me is the fact that since Obama’s visit was announced; Gaza hasn’t been mentioned as though it no longer exists on the political map for the US administration. Obama should have enforced Israel to lift its blockade on Gaza ... The people in Gaza believe that Obama’s real face was shown when he arrived in Israel and spoke of their right to defend themselves and pledged to continue to unequivocally support them. But, in my opinion, it was clear from the beginning that Obama wasn’t going to be different from his predecessors regarding the Palestinian question. People thought that he would be different because of his skin color, and since the black people were persecuted by others, they knew the meaning of what it means to be a victim, the meaning of pain and suffering. Obama, however, has completely lost touch with history and truth, as he had to yield to the rules of the political game.

"I hope that Obama can help us have our own state on the 1967 lines. I hope he can pressure Israel to release Palestinian prisoners inside Israeli jails. But Obama will do nothing as long as the Israelis do not agree to it.”

“Honestly, I am optimistic about President Obama’s visit to the West Bank, and I hope Abu Mazen can deliver our true message and capture the suffering of the Palestinians in the West Bank and Gaza Strip. I hope he can show him that in fact we are a peaceful people and that we want peace, but the Israelis keep delaying.

"In my view, Obama would have been able to do much more if the current Israeli government were not what it is now: an extremely right-wing government. Settlers enjoy a considerable presence in this government, and it seems they are planning more settlement activity in the West Bank. The thorniest issue is regarding the pre-1967 lines and the implementation of international resolutions on this issue. All we ask Obama to do is to ensure that Israel respects these resolutions.

"I hope that he is genuine about his intention to help build a Palestinian state by 2014, but what I worry that he will turn out not to be different from his predecessors, who never ceased promising us an independent state.

"Since Obama became president, I think he has been trying to make peace. He withdrew US forces from Iraq and is preparing to pull them out of Afghanistan.

"Obama’s support to Israel is in my view not genuine, but merely based on mutual interest.”

“I don’t understand Obama. While the Israeli government manifestly wanted Mitt Romney to win over Obama in the last presidential elections, Obama has now come to visit Israel and praised Israel and its government, and this only demonstrates the extent to which he is only a tool in the hands of the Israel lobby in the US.

"Obama isn’t welcome in the Palestinian territories. He can do nothing to achieve peace in the region, which [PA president] Abu Mazen has been after for decades. Even if he consistently speaks about peace between Israel and the Palestinians, his conception and plan for peace are more in favor of Israel than the Palestinians. We haven’t forgotten his promises at the beginning of his first term as a president to settle this conflict. What actually happened, though, is more settlement construction, more oppression, more arrests, more aggression while he was keeping silent about all this injustice.

"His statements about Israel’s right to exist on this land only show the futility of relying on US promises to regain our rights. He has come only to pressure [Mazen] to go back to the negotiation table under US auspices.”