Ali Hashem reports from Tehran that Iranian President Mahmoud Ahmadinejad considers the candidacy of his close aide and cousin, the controversial Esfandiyar Rahim Mashaei, as key to his legacy. 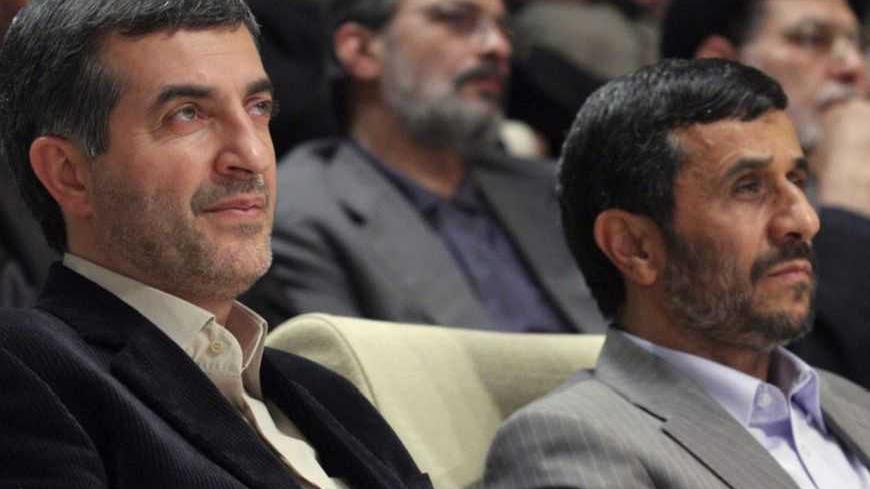 TEHRAN – The streets of Tehran are more than busy these days; Iranians are only days away from their Persian new year, Nowruz. Wherever you go in the Iranian capital, signs of the 3000-year-old cultural celebration surround you.

It's a new year indeed—a year a new president will be elected to succeed Mahmoud Ahmadinejad. But people here prefer not to think about the election right now. According to Ali Akbar, an Iranian I met in the famous Vali Asr street to the north of Tehran, "it's time to celebrate!"

"Why should we start worrying now? We still have three months." Akbar stared at his wife to make sure his answer was right. "Yes, only three months," she said, urging him along.

Many Iranians would have the same reaction as Ali Akbar. However, there are others, especially those who are directly linked to and affected by the election, who have already started worrying. I am speaking here of the politicians.

Ahmadinejad himself, despite the fact he isn’t eligible for re-election, is worried. He wants his candidate—his close aide and cousin Esfandiyar Rahim Mashaei—to run for the presidency. Mashaei is a controversial politician who seems to be at the center of the dispute between the president and the religious elite. He was accused of heresy because he claimed he had direct contact with Shia's twelfth Imam. He was also subject to criticism when he said that Iranians are “friends of all people in the world, even Israelis,” and that any conflict was with the Israeli government only. According to sources close to Ahmadinejad, it's important that Mashaei continues along the president's path, as the president doesn’t represent himself anymore, but rather a wide range of Iranians who believe in him, his vision and his policies. Many of Ahmadinejad's opponents believe that such a move will mean the end of his political life. They regard it as a blatant provocation to Iran's supreme leader Ayatollah Ali Khamenei. In 2009 the supreme leader refused the appointment of Mashaei as vice president, and therefore it is obvious he won't accept him as a president.

Ahmadinejad's old foes in the last election might actually turn to be his potential allies in his battle with the conservatives. The reformists are once again running for presidency, but this time it's not Mir Hussein Mousawi or Mahdi Karoubi. Most probably it will be former President Mohamed Khatami who will bring together the reformists, who scattered after the failure of the green revolution.

Khatami's relations with the supreme leader have witnessed some positive changes, thanks to Ayatollah Hashemi Rafsanjani. The latter's advice to Khatami a year ago to cast his vote in the parliamentary election served as an icebreaker. The supreme leader never met with him, but three of his close allies did days ago, giving an indication the reformists may be running under his auspices. Candidates from the reformist camp might also include Hasan Rouhani, a former head of Iran's National Security Council, and Mohamed Aref, a former vice president.

The strongest among all blocs running for presidency remains the conservative bloc, though they have several strong candidates fighting for a single seat: Ali Wilayati, a close aide to the supreme leader and a former foreign minister, former speaker Gholam Hadad Adel, and Mohamad Baqer Qalibaf, Tehran's mayor. The three have presented themselves as a team that aims to win the election in order to put Iran on the right track. At the moment it's unclear who will be the final candidate, but sources suggest it might be none of them. Instead, it might be Said Jalili, Iran's top nuclear negotiator. Other conservative candidates in the running are former foreign minister Menoshahr Motaki, and former IRG chief Mohsen Rezai.

There is one main question being asked by many, both inside and outside Iran: Who does the leader support? According to a source who knows Ayatollah Khamenei very well, all he wants is "voters. As much as the turnout is big, the revolution will be the real winner, whoever the new president is."

Ali Hashem is an Arab journalist serving as chief correspondent for the Al Mayadeen news network. Until March 2012, he was an Al Jazeera war correspondent and, prior to that, a senior journalist at the BBC.