Palestinian Attacks on Settlers Signal a Shift in Tactics

Attacks by Palestinians against Israeli settlers have increased in recent years, requiring a shift in Israeli strategies to protect settlers in the West Bank, reports Adnan Abu Amer. 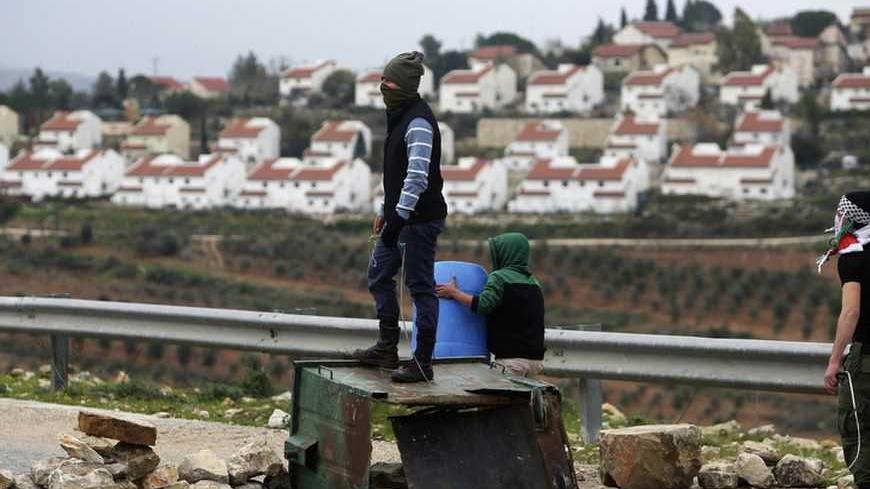 The Jewish settlement of Halamish is seen in the background as a stone-throwing Palestinian protester stands on a garbage bin during clashes with Israeli security officers at a weekly protest against the settlements, in the West Bank village of Nabi Saleh, near Ramallah, Feb. 1, 2013. - REUTERS/Mohamad Torokman

We were all surprised by the sharp disagreements that came to light between the Israeli defense and interior ministries concerning the cost of bulletproofing West Bank settler’s cars against possible armed attacks by Palestinians. The first ministry accused the second of not transferring the 5 million Israeli New Shekels [$1.36 million] allocated for this purpose. The Israeli government usually fortifies settler cars at the expense of the army’s budget. However, because of the relative calm witnessed in the last few years, the number of requests by settlers to have their cars fortified has dropped, despite increasing attacks in different parts of the West Bank.

One of the possible reasons for increased Israeli concern about settlers being targeted in the West Bank came courtesy of the Shabak security agency’s statistic confirming that the number of resistance operations against settlers had increased since the “Pillar of Defense” military operation against the Gaza Strip three months ago. This operation gave the Palestinian organizations in the West Bank impetus to take part in the war effort by either hurling rocks, Molotov cocktails, or sometimes shooting at settler cars at an unprecedented frequency. The army estimated that there was a 300% rise in the number of attacks.

These numbers confirm the fact that Palestinian factions have adopted new and improved tactics to target Israeli soldiers and settlers in the West Bank, assisted perhaps by their possession of the necessary equipment and arms — albeit in small quantities — to carry out such attacks.

The prevailing kind of armed operations in the West Bank lately comes in the form of gunfire targeting the occupation’s military forces and sites, in addition to settlers and their vehicles. This tactic does not require a lot of planning or effort, in comparison to other forms of operations, such as suicide attacks, storming settlements or planting explosive devices, the success of which necessitates added and adequate precision and planning.

The throwing of rocks and Molotov cocktails occurs on a near daily and increasing basis compared to other means and tactics. Israeli and Palestinian statistics note a marked increase in the total number of shooting attacks against military and settlement targets.

Palestinian attacks are conducted against a variety of Israeli targets in the West Bank, such as gunfire aimed at settlements, military outposts or towers, military convoys, army or settler vehicles, and any Israeli target within reach of the armed Palestinian factions. The results of these attacks differ according to the level of planning and nature of the targets. In most cases, good planning leads to good execution and results.

This type of attack is within the capabilities of all, and does not necessitate that the operatives be partisan, organized, or part of armed cells whose abilities and capabilities enable them to plan and execute suicide attacks, storm settlements or fire rockets. Any armed Palestinian wanting to oppose the occupiers can take part in such attacks and pounce on any Israeli target, be it military or settler related, with a minimum amount of logistical or operational complications that are normally part of most organized armed activities.

The tactical transformation of the Palestinian armed factions in the West Bank came when they realized that a gun can be more effective than a bomb. A step that might facilitate operations against the army and settlers, as well as afford them greater political justification.

In spite of this, Palestinian tactics differ according to the situation on the ground. While suicide bomb attacks necessitate teamwork and expertise, a Molotov cocktail or shooting attack is much easier to execute. These types of cells specializing in ambushes and sniper attacks are exactly what Israel fears, because they carefully pick their targets, and their expertise and capabilities signal an increased level of military competence.

All the operations undertaken in the West Bank during the last months required a good measure of surveillance, preparation and local support, ensuring stealthiness and effective execution. Not to mention that these types of operations drain the Israeli military machine!

In addition, the Palestinians believe that solely targeting settlers and soldiers in the West Bank deprives Israel from any moral excuses to paint the Palestinian resistance as being indiscriminate. In the context of the international media war, no one would object to the fact that a people living under military occupation for the past 46 years should have the right to conduct operations targeting that occupation’s soldiers and settlers.

Furthermore, the success of the attacks conducted by armed cells in the West Bank against soldiers and settlers deals a “harsh blow” to the Israeli army, and its ability to deter. They also encourage other Palestinian youth to join in, especially given that opening fire from afar allows the guerillas to easily return to Palestinian territories.

The situation on the ground has proven that no measure of electronic surveillance, night vision, elaborate walls and guard towers is enough to deter a lone Palestinian gunman armed with a rifle.

The Israeli reaction to consider these operations and their increased numbers as “strategic threats”, pushed decision makers to demand that security fences be erected around all settlements in the West Bank — particularly Ariel, Gosh Atsiyon and Ma’ale Adumim — in order to protect them against potential Palestinian attacks, in light of the relevant security agencies’ expectation that these armed cells would continue to conduct future operations.

The situation in the West Bank points to an increase in what is known as “the fear index,” whereby Israeli military patrols with tanks supported by helicopter guns have begun conducting unusual missions that were not previously part of their ascribed tasks. They have increased their presence in and around the settlements, as well as on the roads and crossings leading to them. They have utilized camouflage to give the Palestinian cells and their reconnaissance teams the impression that new and more vigilant measures are being employed to prevent anyone from conducting military attacks or kidnappings, in preparation for a prisoner exchange agreement, as Hamas and its military wing had previously announced on more than one occasion.

With the exception of secret missions, the Israeli measures so far seem to have been carefully executed, with the element of surprise playing an added role in pursuing the armed groups, as was evident in operations conducted in settlements neighboring Palestinian cities such as Nablus.

These movements can be clearly seen, and Palestinians routinely talk about them as they do about all Israeli activities. They include the nightly use of flares while military vehicles, mounted with lights similar to those on ambulances, move about; in addition to the intense activity of helicopter gunships both during the day and at night. This picture repeats itself along the points of contact and inside most settlements, where areas have been set aside for barracks and tank emplacements.

The facts on the ground in the West Bank indicate that army camps have become forward bases on which falls the responsibility of conducting, assigning  and even planning operations. This comes as a result of their proximity to and open communications with settlement security officers and armed settler patrols. Meanwhile, the level of daily panic and fear among some West Bank settlers has pushed them to use tracked tanks as transportation to leave the settlements for hours on end just to do their shopping.

All these details have put a high degree of pressure on the Israeli security situation. The Palestinian guerillas’ successes in breaching the security perimeters have pushed settlers to leave, and Israelis to feel that no place is safe anywhere on the West Bank — not even in the markets, or on board the settler vehicles and convoys that pass through the landscape.