The National Action Party (MHP) is poised to oppose peace with the Kurdistan Workers Party (PKK) on the grounds that it will compromise Turkish identity, writes Caleb Lauer. 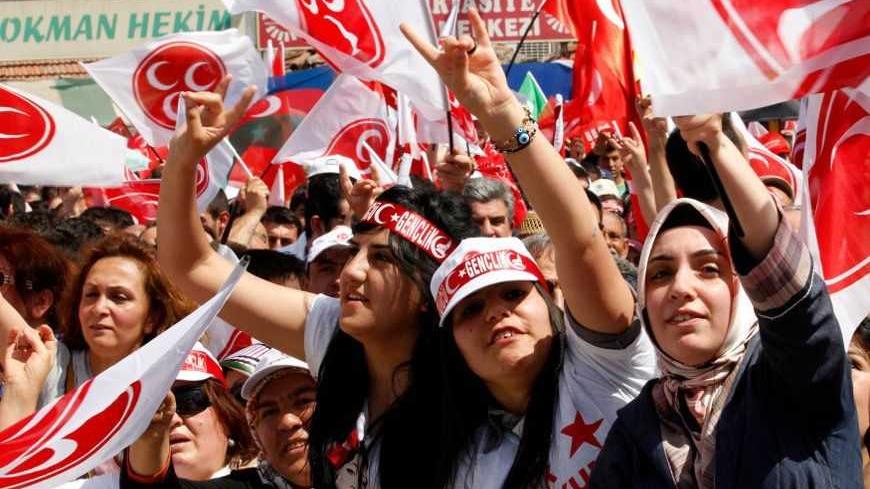 ISTANBUL —Two dozen retired men, most in woolen blazers, turned their chairs to the café’s center table. A grey-haired member of parliament in a black overcoat had taken a seat, in from a light February rain following Friday prayers at a nearby mosque. Celal Adan, Nationalist Action Party deputy for Istanbul and a politician on the hustings, quickly came to the crux.

“Who is it that wants to break Turkey’s union? Not Turks. Not the state,” Mr. Adan told the men in this working-class Istanbul neighborhood. “The PKK has killed Turkish soldiers, and now they say ‘Let’s make peace’?”

No, he said. Turkey should not legitimize the Kurdistan Workers’ Party (PKK) by negotiating peace. “Those that strike our soldiers or at our flag … need to be tried in court.”

The Nationalist Action Party, known by its Turkish initials MHP, is the only party in the Turkish parliament opposed to the unprecedented movement under way toward ending the three-decade PKK insurgency that has killed more than 40,000 people.

Despite having just 51 of 550 seats in parliament and being often labeled “far-right” and “ultranationalist,” the MHP is neither fringe nor marginal. The party is the second choice of many voters, pro-government and pro-main opposition alike.

What was once the party of Turkey’s “sans-culottes” under Alparslan Turkes (the Cyprus-born army colonel and veteran of Turkey’s 1960 coup d'état, who founded the MHP in 1969) has become a party of better-educated and higher-earning voters, says Ali Carkoglu, political science professor and voter behavior specialist at Istanbul’s Koc University.

Devlet Bahceli, a 65-year-old former economics professor, has transformed the MHP since taking control in 1997 soon after Turkes’s death, moving the party toward the center and suppressing the violence that used to be committed in its name.

The MHP opposes talks with the PKK not because it fears losing votes to peace. In fact, the MHP does not really see increased support when there is increased conflict with the PKK, Mr. Carkoglu said. “The end of the PKK does not mean the end of the MHP. Rather, a more open and civilized Turkey could mean a stronger MHP.”

For many voters, peace may seem a bigger threat than insurgency. They fear settlement with the PKK and more cultural rights for Kurds will diminish the “Turkishness” of the state, something tantamount to toppling a pillar of national security.

“There is a bloodless war being fought in Turkey today … between those that would liquidate, and those that would preserve the national Turkish state,” said Serif Gul, a 32-year-old former senior official of the MHP and of the Ulkucu (Idealists), the party’s affiliated youth movement. (Mr. Gul’s father, Mehmet Gul, was also a senior Ulkucu and MHP MP). We spoke at what was once Ataturk’s home on the Sea of Marmara, today an enclave for Turkish MPs, near where airliners flew a few hundred feet over the sea on final approach to Ataturk Airport. While political Islamists, liberals, and “Kurdists” would eliminate the “Turkishness” of the state, Mr. Gul argued, the MHP and the Ulkucu movement (along with some leftist nationalists) fight to protect it. The MHP offers anxious voters a “guarantee” in this fight, Mr. Gul said.

The “Turkishness” of the Turkish state has long been seen as a precondition of the country’s national security. Continuing a policy of the Ottoman Empire’s last years, the Turkish Republic institutionalized the belief that only a common language, an idealized history, and Sunni Islam — all semi-purged of foreign, especially Arab, influence  —could bind society together and prevent loss of territory. The Treaty of Sèvres of 1920 is still regularly invoked here to remind people exactly how foreign powers have wanted to divide Turkey.

At a concert in an Istanbul basketball arena on the weekend of the MHP’s 44th anniversary, groups of young men — Ulkucu members — were directed to their feet between songs by sharp-dressed leaders. In unison they shouted, “God is Great!” and “Martyrs are immortal! The fatherland is indivisible!”

A small girl playing in the stands wore a MHP flag as a superhero’s cape. To the music, many waved the MHP/Ulkucu wolf’s head salute — index and pinky pricked into ears, middle fingers and thumb pressed into a snout; despite a grandfather’s best efforts, one toddler couldn’t quite manage it. Half the women wore headscarves that were chic, not traditional.

“Our society is breaking apart,” said Cihan Dabak, a software engineering student and Ulkucu member. Turkey faced threats, such as the PKK and pressure to recognize the Armenian Genocide — both, for Mr. Dabak, were just land grabs.

“The Turkish identity cannot be understood outside the conception of internal and external threats,” Jenny White, anthropology professor at Boston University, and author of Muslim Nationalism and the New Turks, said in a phone interview.

In this, many see racism. When “Turkishness” is seen as an instrument of national security, “others” in society — for example, Kurds, or Armenians — become potential internal national security threats susceptible to manipulation by external foreign powers looking to weaken the Turkish state, Ms. White explained. In Turkey, such suspicion has led to murder and hate crimes.

The MHP, predictably, says its policies have nothing to do with race, or discrimination. Race is too weak a concept for national security: race differentiates, culture unifies, Serif Gul said. In a society born of a multinational empire, “One of my ancestors could have easily been Greek or Armenian … Not everyone living in Turkey can be a ‘Turk’, but everyone can be embraced within Turkish culture,” he said.

The party makes no apologies for insisting Turkish culture must dominate Turkey’s society. Extending cultural rights to Kurds or a new constitution, as is currently being drafted, without reference to “Turkishness” is too risky, Mr. Gul said. “If we were Sweden, we could be the most democratic country in the world because our neighbors would be Norway and Finland.” Turkey’s neighborhood — consisting of Russia, Iran, Iraq, and Syria — does not allow such luxury.

The prospect of peace with the PKK is the most dramatic illustration that Turkey is coming to terms with its Kurdish identity. The fortunes of the MHP will be a key indicator of whether Turkey can integrate this with its Turkish identity.