With Fatah and Hamas so far unable to reach a final reconciliation deal, some officials are considering an interim accord to manage the split, reports Daoud Kuttab. 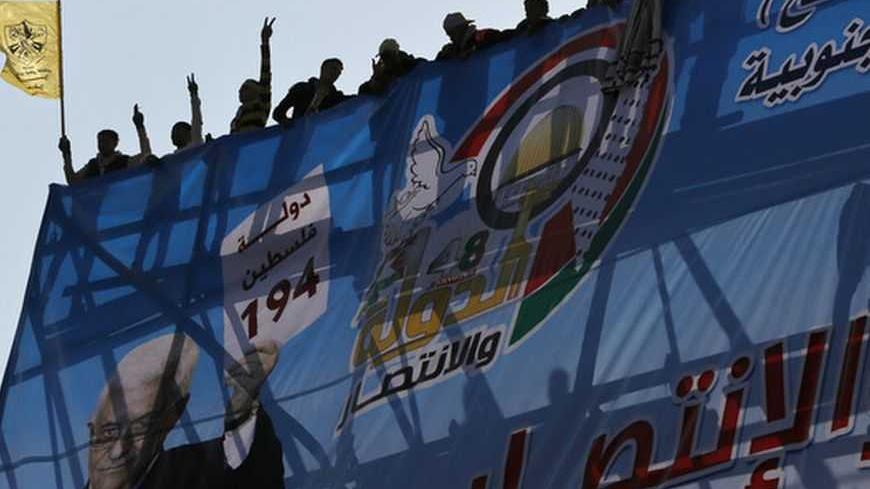 Palestinians stand behind a poster depicting Palestinian President Mahmoud Abbas during a rally marking the 48th anniversary of the founding of the Fatah movement, in Gaza City, Jan. 4, 2013. - REUTERS/Suhaib Salem

While all indications, actions on the ground and public statements appear to show movement in the Palestinian national-reconciliation process, the reality is that it is still facing stumbling blocks.

Palestinian leaders from Hamas and Fatah are meeting regularly. Also meeting with them are other factions (the Palestinian Liberation Organization [PLO] and Islamic Jihad) as well as independent personalities. Election registration in Gaza has restarted and, due to a strong turnout, the registration process was extended for two additional days. Hanna Nasser, the head of the Central Election Commission, made public statements in Gaza that the powers in the Gaza Strip are cooperating with the commission and that people are coming out to register.

The Public Freedoms Committee — a rights committee established as part of the reconciliation process and made up of Islamists, nationalists and independents — has been meeting in the West Bank and Gaza, and their efforts seem to have resulted in the release of some journalists and political prisoners. But there is no clear indication if all prisoners held on account of their political position have been released.

The discussions on the next Palestinian government, which is supposed to be a unity government headed by Mahmoud Abbas, continue, but there are no announced dates as to when it will see the light of day, what mechanisms will be involved and how long it may work. All these issues are sources of contention among the different groups, mainly Fatah and Hamas.

The PLO restoration effort also seems to be on track, but there is no clear indication as to when it will be reconstituted.

While certain progress is being registered, most politicians, when questioned privately, say that they are skeptical that the process will achieve the happy results expected from it. The reasons for this negativity vary. Some claim that the Hamas leadership in Gaza is concerned about losing power, while Hamas supporters claim that Mahmoud Abbas and the Ramallah-based leadership are under pressure from the US and Israel not to let the reconciliation process succeed, as it will give legitimacy to Hamas.

Some Hamas supporters concede that in the past, it was the Islamists who had been hesitant about reconciliation, but that in the recent meeting, it was Abbas and his envoys that caused the delay. According to these sources in Gaza, the reason for the delay from Abbas was that the Ramallah leadership wants to first see if US President Barack Obama is serious about taking an active role in the peace process. Abbas also wants to prevent the Americans and Israelis from using the reconciliation as an excuse to changing the focus from ending the occupation and pushing for statehood, to whether Hamas has agreed to the demands of the international community.

For its part, Hamas and its supporters insist that they accept that the PLO under Abbas should be the sole representative of Palestinians in any negotiations with Obama and even with the Israelis, provided that the Palestinian public will be allowed to vote on any agreement reached by Abbas.

Skeptics are saying that while they don’t expect a major breakthrough in the reconciliation process in the coming months, they do recognize that an interim agreement might be reached to manage the split rather than resolve it. While the presidential, legislative and Palestine National Council elections are seen as the ultimate arbitrator for the future of Palestinian politics, most agree that a managed agreement might not come soon, but will probably witness the birth of a unity government that begins the healing and reconciliation processes.

Such management of the conflict is attractive to both sides as it avoids them having to risk losing the powers that they have at present. But even this possibility does not appear to please everyone, as some leaders insist that it should be a single package agreement that works on all fronts, not a piecemeal agreement. The role of the financially supportive Arab countries such as Saudi Arabia and Qatar is also an important factor as to whether a managed reconciliation will be accepted or if those holding the purse strings to both Gaza and Ramallah will insist on a full reconciliatory breakthrough.