Ben Caspit writes that President Barack Obama's visit to Israel will remind Prime Minister Benjamin Netanyahu that diplomacy between Israel and the Palestinians is still at the top of the US agenda. 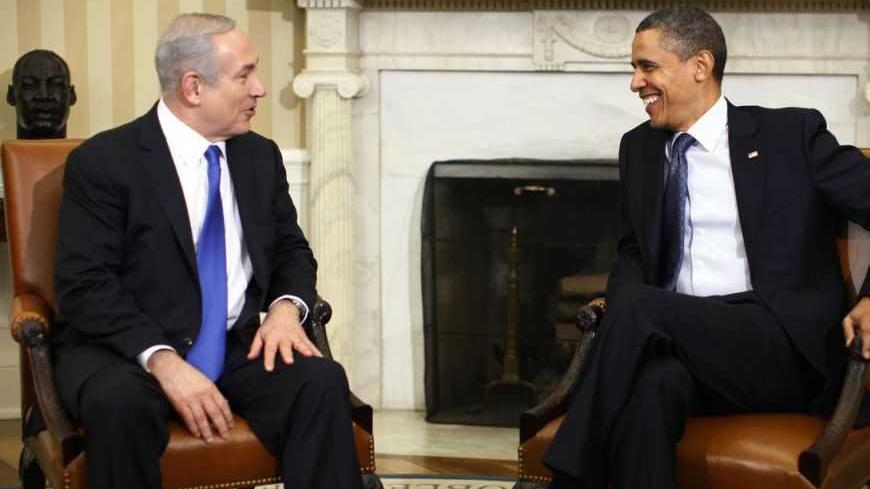 The previous elections in Israel took place in February 2009, some three months after Barack Obama was elected as the first black president in the history of the United States, and about one month after he assumed office. Prime Minister Benjamin Netanyahu formed his government on April 1, 2009. In other words, Obama had a 40-day hiatus in which he was the sitting president and Netanyahu was the prime minister-designate, attempting to put together a coalition. Tzipi Livni’s Kadima was the largest party in the Knesset [Israeli Parliament] then, with 28 seats, one more than Bibi’s Likud. At that time, various forces in Israel and abroad, recommended to the Obama team that the president make a quick presidential visit to Israel. Their reasoning? They hoped that this might influence the configuration of Israel’s future government. Following those elections, they explained, Netanyahu could choose one of two possible alternatives to form his new government. A presidential visit would make it clear to him, and to Livni too, that the peace process would be high on the agenda of the Obama’s first term, and that the government should be formed accordingly. It would be a case of “soft involvement” in Israel’s internal affairs, but of the kind that remains within the realm of legitimacy. As we all remember, Obama did not accept this recommendation. He preferred to visit Egypt and deliver his famous “Cairo Speech,” which, in retrospect, seems like one of his more resounding errors.

Let’s skip to today. A recommendation has been sent to Washington yet again. In fact, it is the exact same recommendation. The identities of the people who sent the recommendation are more or less the same as well. They are Israelis involved in generations of diplomatic negotiations. They are involved politically and even internationally throughout the entire region. “Mr. President, you have another chance to signal your intent. You can clarify to whoever needs clarification that this time the diplomatic process really will be at the top of your agenda. Maybe this way you can influence the new coalition-in-the-making. Maybe Netanyahu will finally internalize how things really stand. Maybe his coalition partners will realize it. This is your second chance, Mr. President,” they will go on to say. “You won’t get a third. You have no more terms left. It’s now or never.”

The initial impression was that Obama rebuffed this recommendation too. The clearest sign of this arrived in the form of an announcement that the designated Secretary of State John Kerry was going to make a quick trip to the region. That should be more than enough for those Middle Eastern and Asian natives for now. Yesterday came the big surprise. Obama himself is coming. The news left many in Israel reeling. First, they had always assumed that the President of the United States would be the main guest of honor at Israel’s “President’s Conference” in June, at which President Shimon Peres will celebrate his ninetieth birthday. Obama has acquired a deep respect for Peres and is fostering him as the moral alternative to Netanyahu. His presence at Peres’s event after elegantly skipping over Netanyahu for the past five years could send a piercing message. But now it seems that despite all of that, something really is moving in Washington. They’ve decided to stop playing and start winning, not just in the poll booths of America, but in the hearts of Israel too. Obama will arrive in March, with or without a new Israeli government, and with this he will be sending a clear signal. “Friends, this time there will be a diplomatic process. We won’t let you pull one over on us this time. So, my good friend Netanyahu, you had better put together a coalition you can work with, so that we can work with you. Period.”

So what’s the plan? It’s too early to celebrate. At this stage Obama has no plans to roll up his sleeves and dip his delicate hands in our filth. That’s why he brought John Kerry on board, or it’s probably more accurate to say, that’s why they invented the Europeans. America will “lead from behind,” just the way Obama likes it, providing proper back-up and the appropriate signals. It will then try to pick the best possible moment to burst in and throw all its weight on something or someone.

And what will the Europeans do? They’re coming up with that now. London, Paris, and Berlin are at the forefront. The last time that they laid out a diplomatic initiative, it gave up the ghost even before it was even toilet trained. That is why their next plan will be more realistic. In its broadest outlines, it will include approval of the Arab initiative by all the parties (with minor reservations from Israel) and the start of negotiations toward a permanent settlement, under international supervision but without a deadline. The most difficult issues will be deferred until the end of the process, which no one actually sees on the horizon. At the same time, however, the famous “bottom-up” process will be expedited, and there will be massive investment in the Territories, with aid coming from the individual Arab states, the Arab League, the Gulf States, and the international community. And, of course, everyone will approve the creation of a Palestinian state, albeit with temporary borders. [President of the PA] Abu Mazen will finally be a head of state. At the same time, he will receive international guarantees that Israel won’t drag out the negotiations forever (but only until the Messiah arrives). And a redeemer shall come to Zion and to Palestine.

A word of warning: These plans are in their earliest stages and there are plenty of things that could blow them up to smithereens before they even come to fruition. And even if they do see the light of day, they might yet face the same fate faced by most plans concocted by the “goyim” [gentiles] for the Jews and Arabs: a pauper’s burial in that special potters’ field dedicated to generations of foregone diplomatic initiatives.

On the other hand, we have reason for a faint glimmer of optimism. First of all, Obama is doing something. Finally. Secondly, the peace process is starting to wake up from its catatonic state and show signs of life. The monitor is starting to hum, and a faint beeping sound can be heard in the control room. What does this say about the political map in Israel? It may well be that Naftali Bennett’s Habayit Hayehudi party will become less relevant. And perhaps Hatenua leader Livni will be more relevant than she originally planned. As for Yesh Atid Chairman Yair Lapid, he is already talking about similar plans behind closed doors. All that is left is to get Bibi onboard, along with the (fair amount of) extremists in the Likud and, of course, former Foreign Minister Avigdor Liberman. Then we can make history! And so, while I advise you not to hold your breath, we are certainly in for an interesting ride.